There are times I wonder if there is anything these days escaping the pursuit of constant change. Don’t get me wrong in thinking I am against change because I definitely am not. Change is good, but I do feel that we need to pursue it with some caution.

Lately there has been much talk about all the changes taking place in my birth city…Halifax… the capital of Nova Scotia. Human nature dictates that changes will result in two opposing sides: those who look to the past wanting to keep things as they are and those looking to the future willing to support any kind of change. Halifax is presently facing this problem, but from what I can tell they might be following another human reaction to change…. that of moving from one extreme to the other. “Let’s join the race to become a world-class city at all costs” seems to be the mantra. This is good, but let’s slow down a bit and try to do it with taste.

Historically, the city has shown an inclination to get stuck in the past right up until the early 1970’s when the urge to move forward began with the beautification of its waterfront. When I was growing up in Halifax, Water Street, down by the harbour, was a place to avoid. I always hated that fishy smell. The street was a series of dilapidated grey warehouses, the naval dockyard, seedy taverns, with some notorious ‘red light’ houses thrown into the mix. Then in the 70’s it all went through a huge metamorphosis resulting in the Historic Properties. Our waterfront suddenly had changed into not only a major tourist attraction, but also became accessible to all Haligonians. It had managed to preserve some of the old fish houses and wharves to produce a nice mix of the old and the new.

Other changes took place at that time and well into the 80’s. Some were good others not so. Spring Garden Road became a major shopping area to the detriment of Barrington Street which always had been. The old Capitol Theatre, which my grandfather helped engineer, was demolished resulting in much hue and cry to be replaced by the Maritime Centre, a large modern complex at the bottom of Spring Garden Road. Many of us kids, and adults too, were upset at how the ‘powers that be’ could have torn down such a unique theatre as the Capitol which resembled the inside of a grand old castle.

Perhaps this flurry of changes was too much for conservative old Halifax because for the next few decades, primarily under the mayoralty of Peter Kelly, the city showed little forward movement. Under his leadership any wise planning and growth had come to a screeching halt. Barrington Street became more derelict as retailers moved out to swanky suburban malls, affordable housing became a scarcity as evidenced by the increasing numbers of homeless on the sidewalks of Spring Garden Rd., and few construction sites and cranes were to be seen anywhere.

However for the past several years, the construction tap has been turned on full blast under the leadership of Mike Savage, Halifax’s present mayor. This began with the regional council’s decision to go ahead with the construction of a new convention centre, after many years of wrangling on whether the city should or shouldn’t take the risk of pumping millions of dollars into a new one when they already had one… albeit a small one. Located in the heart of downtown, the Nova Centre has caused traffic chaos and scores of disgruntled restaurant and store owners. Whole streets have been closed for a year or more as the structure endures one delay after another. To satisfy my curiosity, I just had to go see for myself what all the fuss has been about and have to admit I was blown away by what I saw. It’s stunning and should put Halifax up there on the list of world-class cities. It’s definitely had a ripple effect as nearby buildings in the downtown core are either being spiffied up or torn down to be replaced by more modern buildings. I couldn’t help wondering if this really was the staid old city I was so eager to leave 40 years ago?

On a whim, I decided to wander further down to the south end of Barrington Street where my father lived for most of his adult life, and where I spent my first three. I wanted to see if #315, a stately old house where he had his apartment, was still standing. It was… but barely! A huge sign was posted next to the main door indicating that this house and the one next to it is slated for demolition. But hold on… this decree was issued in 2015 and the house is still there because there was another smaller sign stating that these premises have been declared ‘heritage’ houses. It’s not just for personal reasons I want to see these houses saved, but also because they represent an old style of architecture from Halifax’s past which is too rapidly disappearing. I hope the city councillors will consider this and support the Heritage Society rather than another greedy developer.

As I continued to search out other changes in the city, harkening back to my early years, I decided to pay a quick visit to where once my old high school was located. Queen Elizabeth High (QEH) was demolished ten years ago and been replaced with an unusual project called the Common Roots Urban Farm which supports community and marketing gardening for the purpose of promoting health and wellness in the Halifax Regional Municipality (HRM). This is the acronym used for the city of Halifax and the outer regions including Dartmouth…another change which has occurred since I left. Nevertheless, here is a wonderful example of how a prime piece of land in the midst of one of the busiest parts of the city can be used to introduce some rural living into that of the urban.

In case you are wondering what happened to QEH, well the good news is that a gleaming new high school uniting protestant and catholic students under the same roof now stands nearby. When I was a high school student, St. Patrick’s and Queen Elizabeth were rivals just a few blocks away from each other. St. Pat’s has also faced the wrecking ball, leaving a piece of prime land vacant until a decision is made on what its fate will be. Let’s hope it will be a wise choice that will bring more country into the city and be of benefit to all people.

These days my visits to Halifax invariably end up in a quick stop at the new Central Library. This building has garnered accolades and awards for its architecture from all parts of the world. It’s an environmentally sustainable building which can boast of a rooftop terrace growing native plants, and toilets that are flushed with rain water.  An abundance of windows strategically placed on all levels allows the sun to pour in to control the indoor temperature and help reduce electrical costs. All the materials used in its construction are natural. You can really notice the difference when you spend time in this building. For this reason alone, I could spend days there instead of just a hasty stop for a cup of delicious coffee and a home-baked pastry at the Pavia Cafe on the roof top overlooking the harbour.  This library is truly accessible to all citizens providing cultural activities and small rooms which are rented out for other varied purposes. The acoustics are fantastic because no matter how many people pass through its doors or what is taking place inside, the place still feels and sounds like a library…quiet and peaceful. Halifax can be proud of this building.

Yes, the attitude and the look of my home city has certainly changed for the better. Where once it was conservative and rather dowdy, it’s now bright with a positive vibe prevailing. It is fast becoming a ‘world-class’ city and a more desirable one to live in as far as I can see. My one hope is that it doesn’t become too obsessed with trying to outdo other cities. Having lived in Toronto for many years, I certainly don’t want it to make the same mistake that city did by erecting tall office towers and condos, as well as a hideous express way that not only obscures the view of the lake but also cuts it off from the rest of the city. This has left the best part of the city mainly for the enjoyment of the well-heeled and the tourists when a waterfront needs to be accessible to everyone. Halifax, if you truly want to be a world-class city then learn from the mistakes of others by being a leader for what can be better.

To make a slideshow of these pictures, left click on the first one and follow the arrows. 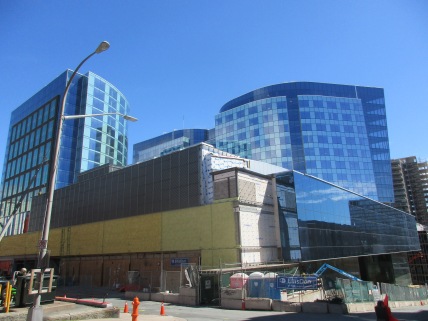 The Nova Centre from a distance. 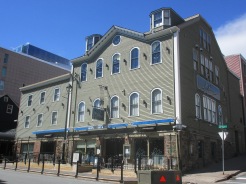 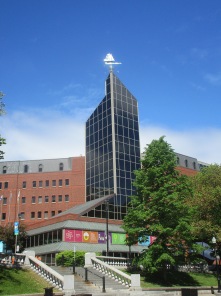 The first Trade and Convention Centre with a new face.

Another high rise obscuring the view of the harbour.

A tall ship from the Netherlands docked at the harbour. 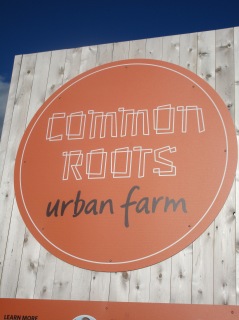 The community gardens which have replaced the Queen Elizabeth High School. 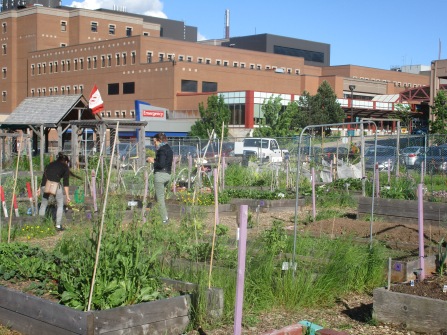 The gardens with the Halifax Infirmary in the background.

Lunch at the Pavia Cafe on the rooftop.

One of the entrances to the Public Gardens-a true Victorian Garden in the centre of the city.

The Gardens bandstand with another crane in the background.

Rhododendrums in all their glory.