Battambang, Cambodia’s second largest city, is a relative newcomer to the tourist scene in Cambodia primarily due to the Phare Ponleu Selpak’s Circus School. I first heard of Battambang and the sensational productions of this group from my journalist friend in Phnom Penh who reports on Cambodia’s fledgling but flourishing arts and culture scene for the Cambodian Daily newspaper.

Before the Khymer Rouge wrecked its havoc on this beautiful country and its people, Battambang was not only considered Cambodia’s ‘rice bowl’ but also the ‘heart and soul’ of its culture. I decided that this year I had to go up to the northwestern part of the country to check it out for myself.

What struck me was the friendly spirit of the people and the peace that prevailed over this city of 240,000 inhabitants. Moreover, it was easy to navigate. The Sangkae River runs through the town splitting it into two parts resulting in numerous bridges, and streets laid out in a grid system, thanks again to the legacy of the French. I was able to walk everywhere and never get lost. The tuk-tuk drivers weren’t too happy about this but they never gave up on me and always accepted my rejection of their offers with good grace and humour. 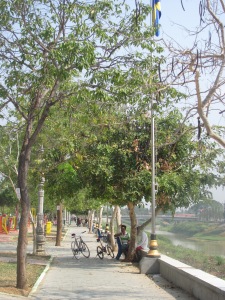 Battambang or “bong” witch is the way it’s pronounced but not spelled, like all Cambodian cities, has its fair share of temples and ancient ruins from its Khymer past. Most of them are in the outlying area and easily accessible by tuk-tuk or moto-bike. Not excited about combing temples and ruins in the heat and having had enough exposure to the Cambodian past which can be so gruesome, I opted to stay within the city limits and get a feel for the place by walking and meeting the people. I stayed for four days and would have visited at least one if not two of the more famous sites such as, Ek Phnom an ancient temple that pre-dates Angkor Wat, or Wat Samrong Knong and the “Well of Shadows” which is the oldest pagoda in the area and was a prison during Pol Pot’s terror. However, I was distracted by  my computer and G-mail which decided to test my patience and mental stability by presenting me with one problem after another. I quickly realized how dependent I’ve become on my technical gadgetry so had no other choice than to seek help and not worry about seeing or doing all those touristy things I could have done.

Inside the grounds of one of Battambang’s temples.

After spending countless hours of what I can only describe as a feeling of floundering around in the darkness of cyber space, I eventually found  and bravely sought help from eager to please Cambodians who all seemed to have a different solution to my problems. Unfortunately, their language skills didn’t come near their eagerness to help which was a major drawback to a technical illiterate like me. Eventually after I thought some of my problems had been solved, I managed to attend a performance put on by the students of the now famous Phare Selpak’s Circus School.

The Phare school is a huge success story for this area and was the beginning of Battambang’s quest to regain its past glory of being the spiritual, intellectual, and cultural centre of Cambodia. It all started after the fall of the Khymer Rouge in the late ’70’s in the midst of the largest refugee camp of displaced Cambodians located on the Thai-Cambodian border. Nine of Veronica Decrops’ students, who were children at the time she was providing drawing workshops for them, went on to become the founders of Phare which means “the brightness of the arts”. Decrops understood the need for these disadvantaged children to overcome their horrors of the war by developing their artistic talents and instilled in them the belief that the arts are a powerful tool for human development and social change. To this day, this remains the focus of the organization supporting the school where up to 1400 students are presently enrolled. All come from disadvantaged families where through a co-operative effort by teachers, parents, and the students the environment is not only creative but nurturing and supportive.

The ongoing work of Decrops’ vision was very evident in the premier of Chills the performance I attended. The young performers connected instantly with the audience so much that there were times I was sitting on the edge of my seat as yet another more daring twist, flip or balancing act was executed on the small stage in front of us.  These guys and gals were true performers – professional all the way, yet engaging and sincere in spite of the heat which made their bodies so wet that I was certain one of them would slip and have a serious fall. At the end of their performance, they were all there to let us come up on the stage to congratulate them or take a picture. In the spring, they will travel to France and from there take their show on the road to other parts of Europe. Graduates of this school have now set up a professional group in Siem Reap with nightly performances and when not high season there, they tour the world making a name for themselves as the Phare Circus. Circle de Soliel had better keep an eye on this group!  You can find out more about the school and the group at http://www.pharecambodiancircus.org. 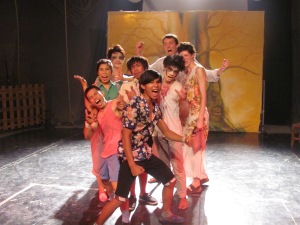 The troupe after their very energetic performance.

To escape from my hotel room and my computer problems, I crossed the river to stroll around the down town of Battambang. On my walks I met some incredibly interesting people. One of the first places I walked into was Bric-a Brac where almost immediately I was greeted by one of the most energetic and engaging Cambodian girls I have yet to meet on my travels here. Lisa was her name and because her English was very good, we were able to talk about many things especially the changing role for women. She left her rural family home to come to Battambang on her own to learn English and to attend university to study International Law. When not studying she is working at Bric-a-Brac making crafts and serving customers. By nature Cambodian girls and women are shy and quiet, but they are gradually becoming empowered. Many have worked with volunteers at various NGO’s to learn confidence building skills and are now practicing them as she is doing.

Then I met Kimleang at Green Lotus Tours and Coconut Jewellery who was also busy making attractive bracelets out of recycled bottle tabs and rubber. She is another enterprising young woman who has left her family home to pursue her own dreams. She has started a small school in a nearby village and struggles to keep it going by crafting and selling her jewellery for the enterprising young Cambodian fellow whom she works for.

Kimleang showing one of her finished products.

The next day as I was walking along a side street lined with various art galleries, a man on a motor bike stopped me to ask in perfect English what the difference was between “shall”and “will”. I was nonplussed! Reaching back into my memories of learning and teaching English grammar, I was able to come up with a fairly accurate definition for both. He quickly hopped off his bike, took off his helmet, and suggested we sit at a nearby bench so he could talk some more. He got right to his point which was to tell me a bit about his past during the Khymer regime and what he was now doing to help rebuild his country. I was impressed but couldn’t help but be somewhat skeptical since there are always the scammers who want your money for a good story. However, this fellow even had brochures about his school, and was going so far as to carry a huge book with names of all the donors who had given something or volunteered at the school. Now I was doubly impressed! You guessed it: I became another of his donors. If you want to read more about his school go to : www.slarkramenglishschool.com.

The children in Cambodian are so visible which is to be expected in a country where old folk are a rarity. We need to remember that many of them never survived the Khymer Rouge regime when over one fifth of the population was killed. In the cities at least, it appears that the main focus of the parents is get their children educated as best they can. In the evenings you could see groups of kids being coached in what looked like judo or tai kwan do. At all hours of the night parents were playing with their children in the parks along the river. Physical activity seemed to be high on their list of nightly activities. I didn’t see many kids playing with their I phones, and I certainly did not see one obese kid! 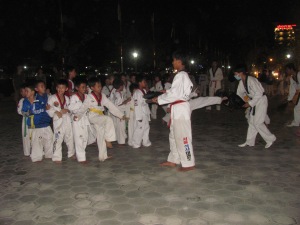 Many of the schools in Cambodia were set up and are run by NGO’s which are considered to be far superior to the government schools which are underfunded and totally corrupt. There was an  NGO school located next door to my hotel and every morning at precisely 7 a.m. I was awakened by the children as they sang their national anthem before heading inside for their classes. I learned from a very interesting American teacher that this school like many of the NGO schools is failing to provide the kind of education needed by the Cambodian students which helped me understand why I had met two Cambodians this year and one last year at the Meas Family Homestay who were setting up their own.  His job now was to visit all the schools in the area to determine if the level of English instruction was meeting expectations and in the best interests of the children. Time and time again I heard from the Cambodians that the only way for them to move forward and to get their country back on its feet was to learn proper English.

Students heading to class at the NGO school next to my hotel.

On my walkabouts I also witnessed several locations where colourful tents had been erected for wedding ceremonies. It seems that Cambodian weddings can take place over several days so tents are put up with beautifully decorated tables and chairs for friends and neighbours to come and give their blessings to the bride and groom and their families. The same is done for funerals with the only distinction being that everything is laid out in white. Such ceremonies are not carried out by monks in the temples; however, the monk does come to the families with their prayers and blessings. 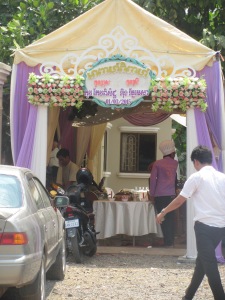 Preparing the tent for a Cambodian wedding.

Maybe I didn’t get to see many of the sites that Battambang had to offer and perhaps too much of my visit was taken up with trying to get my computer problems ironed out, but the one thing I do know is that I will not forget all the beautiful Cambodians and a few barangs (Cambodian name for foreigners) that I met while I was there. I felt a tremendous feeling of renewal among those I talked to, and my sense is this can be traced back to the creation of the Phare visionaries and the good works that this organization is still carrying on today.

12 thoughts on “Battambang – the ”Heart and Soul” of Cambodia”