Isn’t it strange how events come about in our lives? Is it happen stance or is it destiny? There is no doubt in my mind that it’s the latter.

The seed which would grow into my visit to Nepal two years ago was planted as far back as the year of 1970 when my girl friend and I were back-packing around Europe. We kept running into other back- packers who were returning home to the US and Canada from India and Nepal. We were enamoured by their stories of Kathmandu and the vibrant scene of the ‘hippy’ life they had either experienced or witnessed there. It was a whole new world I had not even heard of opening up before my eyes. How naive I was! Fortunately or unfortunately, depending on how you look at it, we never got there since we were running out of money, or perhaps that was the excuse because down deep we were really afraid to test such unknown waters.

When the same girl friend and I were having one of our yearly meet-ups at her house three years ago, the subject of us travelling together to India came up again for the umpteenth time. For me, that seed was obviously still there and about to germinate because I could feel the excitement bubbling up within me. It was time to make this journey! I was going to go even if I had to do it solo! Long ago my husband told me there was no way he was ever going to India. My friend was mildly interested and thought that adding on Nepal would be an extra bonus for her if she went. I agreed so began to incorporate that possibility into my travel plans. As it turned out, my friend took ill and never did accompany me. It simply wasn’t a part of her destiny as it was for me. I set off to fulfil my dream of travelling to both India and Nepal in just over a month. Thank you my dear friend for igniting the fire. You can read about my visit to India in my post entitled “Incredible India” and about Nepal in ” My Adventures in Nepal”.

When I heard of the devastating earthquakes that hit Nepal in late April, I was doubly grateful for having had the privilege to visit this fascinating country when I did. On the other hand, I was so saddened to think about what this beautiful country with its abundance of temples and spirituality had lost. A quake of 7.8 magnitude followed by another at 7.3 seventeen days later has had a devastating effect on the country. Over 8,000 souls taken with thousands left homeless, many of their sacred temples toppled or shaken to their foundations, and an almost fatally wounded tourist industry has left the country reeling. Fortunately much relief has poured in from India, China and other wealthy countries, but with ongoing tremors, a traumatized populace, and a government with an unenviable record of instability and ineptitude, the recovery will be long and probably painful.

According to the latest reports coming out of the country via the media the future is looking a bit brighter than originally anticipated. The government is at long last stepping up to the plate by focussing on raising funds for rebuilding. They are seriously taking the need to rebuild more responsibly something which should have been done years ago since they have been warned about huge earthquakes coming for over fifty years. Moreover, after much squabbling over a new constitution for democracy for the past ten years, they are now about to draw up a long-awaited new one. Yes, it often does take a disaster to get the ball rolling in the right direction.

Tourism is a major industry for Nepal because of the Himalayan Mountains and the trekking that they offer, as well as the spiritual history of the country with its numerous designated heritage sites in the Kathmandu Valley. In fact, tourism provides 40 per cent of its gross national product. Needless to say, the government is anxious to lure the tourists back so have been working tirelessly to reconstruct the least damaged sites which fortunately happen to be those most visited, such as the main Durbar Squares in Kathmandu, Patan and Bhaktapur. There is some doubt that they are meeting the safety standards required so tourists are still being very cautious about returning. The latest report is that many of the sites are offering free WiFi so tourists can upload pictures to send to the rest of the world. Pretty clever marketing, I would say. To sweeten the pot, they have also commissioned many big name stars to come and put on performances to raise much-needed reconstruction money.

In other areas of the country, many of the more remote villages are still reportedly cut off from the outside world. These would be the areas where total villages were wiped out. Another surprising bit of information passed on by the geologists and scientists who have been studying the effects of the quake on Mt. Everest is their discovery that it has actually shifted southward about 1.2 inches. Surprisingly, Pokhara, the second largest city in Nepal and one of the prettiest due to its location on Lake Phewa with the snow-capped peaks of the Annapurna Range towering over it, suffered no damage at all. However, it is suffering an almost total lack of tourists with a 95 per cent vacancy rate.

At this time, Nepal is still feeling tremors around the country which isn’t doing much to help calm the Nepalese nerves. They are also having to deal with mud slides due to the heavy rains. However, this country has endured much discomfort over the years beginning with the abolishment of their monarchy, their subsequent search for stability and freedom from a patriarchal caste system, corruption, constant power outages, and the threat of earthquakes. Their spirits are strong which will stand them in good stead as they slowly move forward to resurrecting their country from this latest disaster. In fact, with a new constitution in place, a Prime Minister who appears to be taking a strong position of leading his country out of the aftermath, and through the generous contributions from around the world, Nepal will survive and tourists will once again be eager to return. 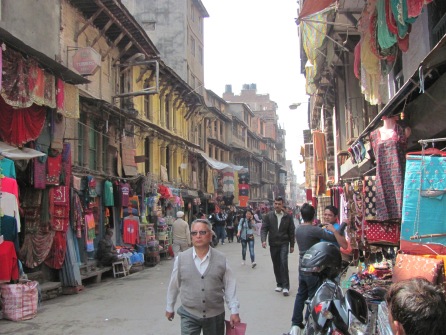 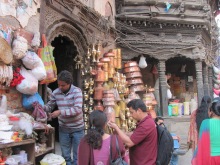 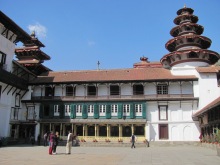 The Royal Palace (now a museum) in Kathmandu. 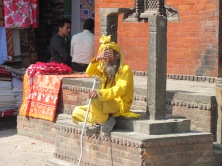 A saddista or spiritual man who owns nothing. 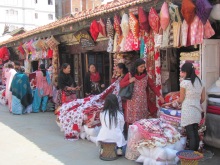 A fair-trade market in Patan. 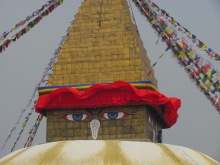 Under the watchful eyes of Buddha in Kathmandu, Nepal 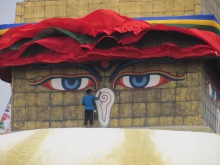 Keeping the temple in good shape. 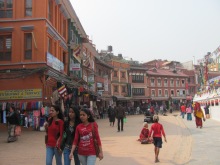 A street in Bodnath – spiritual centre for Buddhists. 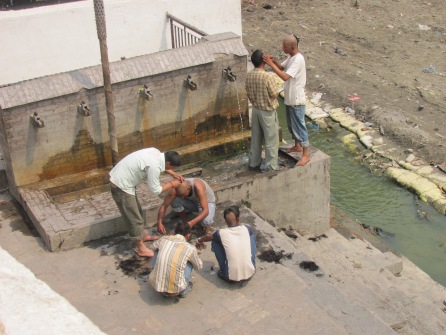 Preparing for a cremation on the banks of the Bagmati River. 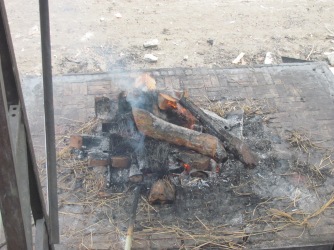 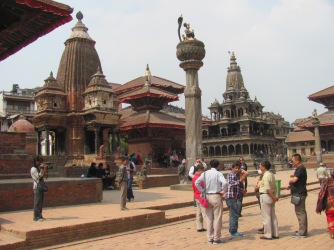 The temples in Patan – Hindu and Buddhist. 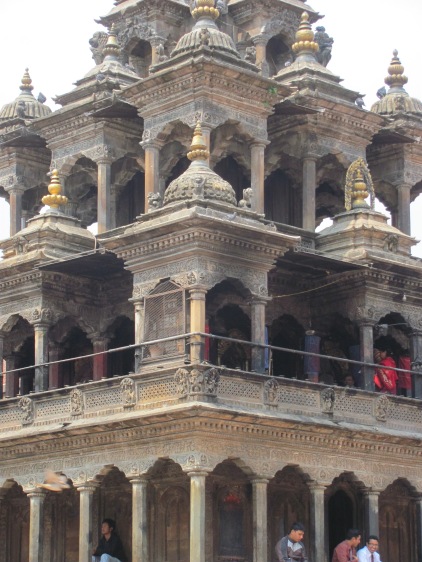 A Hindu temple in Patan. 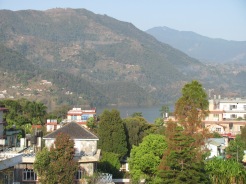 Overlooking the city of Pokhara. 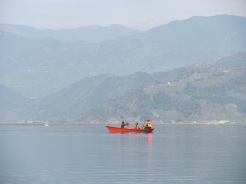 The tranquil Lake Phewa in Pokhara. 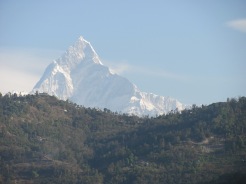 The Annapurna Massif – part of the Himalaya range. 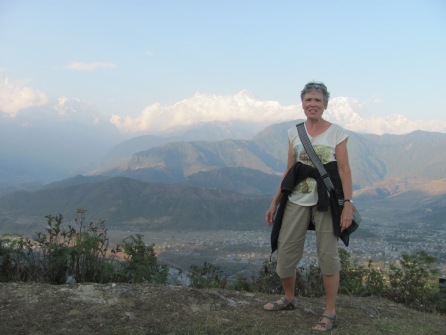 On the way up to Mt. Sarangkot. 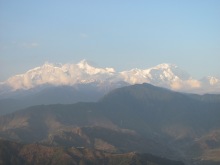 Nearly to the top of Sarangkot. 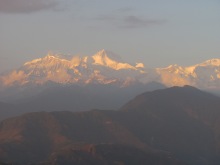 Mt. Sarangkot at sunset in the Annapurna Mountains 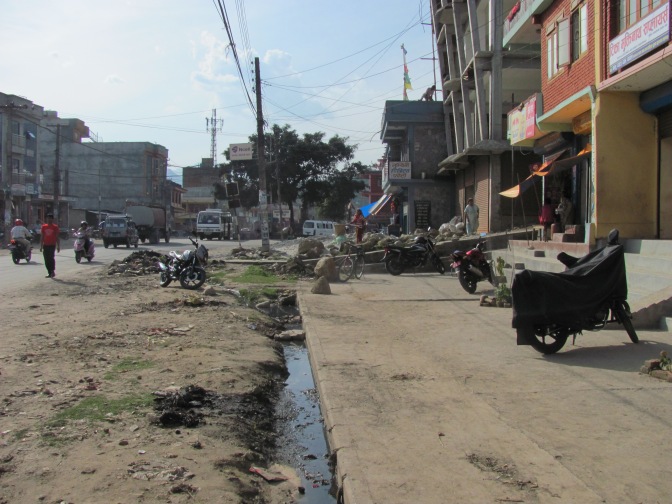 A fairly typical street in Pokhara.

7 thoughts on “Nepal – Lest We Forget”