After living for over a month in Buenos Aires, I gained a new appreciation for city living. It seems strange for me to be writing this since it was just ten years ago that Hubby and I picked up stakes to move from the big city of Toronto to a small fishing village in Nova Scotia. I can honestly say “we” were looking to escape the city for a less stressful and less expensive lifestyle, but it was”I” who vowed I would never want to live in a city again. However, Buenos Aires definitely created for me a renewed sense of appreciation for city living – something I never really acquired while living in Toronto.

There are many reasons for my change of heart. The most obvious one is that after ten years I can see the benefits of city living with a different pair of eyes. In Toronto I was one of thousands of stressed out people having to battle horrendous traffic for a job requiring me to drive all over the Greater Toronto Area almost every day. Now I am retired doing things I like to do and not having to work for a living. I have the freedom to travel to foreign countries which can give me an urban and rural lifestyle, depending on where I choose to go. I can now enjoy all that a city has to offer knowing I will be there for just a short while.

This year Hubby and I chose to rent a small, well equipped apartment to set up a base in Buenos Aires (BA) where we could once again experience some city living. For him, BA would be the perfect place to feed his desire for lots of culture, namely music, and for me to explore an exciting cosmopolitan city to feed my desire to write. Unfortunately, I have to confess that my writing suffered because there was simply too much to see and do in BA. We chose one of the best times of the year to be there – their autumn. When we arrived on March 9th, the weather was fabulous with comfortably sunny days. In the last few weeks, it rained more than we liked, but it still beat spending April anywhere in Canada with the possible exception of BC. As my mind shoots back to my days in Toronto, all I can remember is hot, humid summers and raw, cold winters. BA’s climate alone had a hand in changing my perspective. 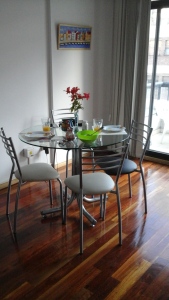 Where we cooked most of our meals.

With time on our hands to be a visitor in addition to living there, the extremely active cultural scene, the abundance of places to explore, and the temperate climate all contributed to my new-found appreciation for the city life. To be more specific and to give you a clearer picture of what will go down as one of the more memorable cities Hubby and I have visited together, I will attempt to write not only on what I (we) liked, but also on what we disliked, found amusing, or downright strange.

Let’s begin with what I liked:

These were some of the good things about BA which I noticed, and I’m sure I would have found more in time. Now for the things I found particularly annoying which others we talked to also noted:

So much for my likes and dislikes of BA. Now I would like to mention some things about this city that I can’t categorize into either one. They can only be called either amusing or strange traits of the city and its people as a whole as seen from my perspective.

I could probably write a book about city living and especially in a city such as Buenos Aires which draws thousands of tourists every year. It is considered as one of ‘the’ great cities of the world to visit, right up there with New York, Paris, or London. It’s a relatively easy city to visit or live in and has something for anyone who ends up there. I am glad we stayed for as long as we did because it would be very difficult to stay for just a day or two. There is just too much to see and do otherwise. 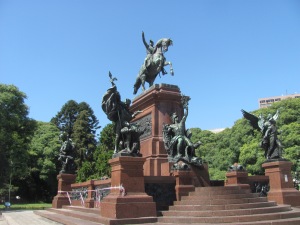 A monument to San Martin who devoted his life to liberating Argentina and Ecuador from Spain. 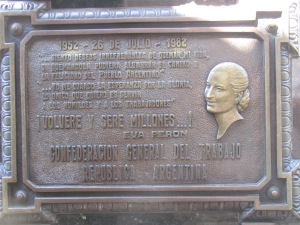 Another heroine for Argentina – Eva Peron. Her plaque at the family grave site now in the Ricoleta Cemetery.