My garden about a month ago.

“Strange looking weeds and insects have been cropping up in my garden this year. It’s a battle to keep on top of them, let alone to get anything to grow.”

These words recently spoken by a fellow gardener instantly resonated with me since I have also been noticing and wondering just why its become more difficult  to get good results from my vegetable garden.

Ten years ago, shortly after moving to Victoria Beach, I attempted to grow vegetables in its very rocky soil. I had gardened successfully for the first time in Moncton, NB in the ’70’s so looked forward to growing my own veggies once again. Despite the rocks and soil, I was happy with my harvest up until about three years ago. Since then I have found it increasingly more difficult to get the same results. In spite of rotating my crops, filtering out never-ending buckets of rocks, and using copious amounts of compost and manure to improve the soil, my yield is getting worse. My production is falling while my cost and effort are increasing. I can’t help but wonder what is happening?

Perhaps I could use better quality organic seeds instead of the usual ones I usually pick up at the local grocery store, or try a different fertilizer….I always use sheep’s manure and compost from my compost pile. These changes are within my control, but the ones which aren’t are the ones that are causing me the most problems … weeds, insects, and other critters who love gardens as much as I do. These I can’t control, but I can learn to deal with them… I hope.

Like my quoted friend, I have been waging a seemingly endless battle with the weeds overtaking my garden. I can pull them out one day only to have most of them appear the next. It’s frustrating for not only have they taken over the garden, but the driveway and the lawn. Next they will be in the house! I know I am getting carried away here but seriously, this could possibly happen. Have you ever heard of the Japanese Knotweed?  Last year I was listening to the CBC’s, The Current, when I learned some very scary things about this extremely invasive weed.

Let me give you a little bit of history on this so-called “King of the Invasives”. It’s also been called “The Terrorist of the Weed World” and “Godzilla”. Does this give you an idea of what I am writing about here? But again I digress. It has its origin in Japan and was introduced as far back as the mid 1800’s to Europe and North America as a plant for decoration and to prevent erosion. It has a thick bamboo like stem with heart – shaped leaves and a creamy white flower which blooms in the early autumn. It is really quite pretty, and it’s easy to see why it was chosen as a nice ornamental… but only in Japan, please!

Ken MacQueen wrote this about it in the June 2015 edition of MacLean’s magazine:

“Japanese Knotweed is in nearly all of our provinces, and the threat is real: it can lower house prices, threaten our bridges, and drive men to madness.”

One can’t help but sit up and take notice of this particular weed problem… especially me. Why? Because we have it growing right here in Victoria Beach along our road and, unfortunately, in some yards where there is moisture. Our yard happens to be one of them! We have had it for several years but never really took it seriously until last year. Now we are taking it very seriously… even Hubby.

Godzilla growing right along side of our road.

Last fall before the snow started to fly, he threw bags of salt on “Godzilla’s” little forest at the foot of our driveway. The salt helped to stunt its growth but didn’t get rid of it. The more people we ask about how to deal with it, the more we learn about how difficult our battle is going to be. This year out of desperation, we tried using Roundup. However, I hesitate to get carried away with this as it’s not good for the surrounding environment or for ourselves.

A third method recommended by a knowledgeable neighbour who had it growing in her yard awhile back is to smother the darn things with a huge tarp or old carpet using something heavy with no seams as the roots will find any crevice and push their way through. This will be our next step.

Our neighbour verified all the information I’ve read about how to treat this weed, and what I learned is that it’s almost impossible to get rid of! The most important thing is to persist with the treatment of cutting back, using salt or Roundup, and smothering it for as long as it takes which could be years. No wonder some people have gone mad! I am now resigned to getting serious for an all out war with “Godzilla” and not give up until the battle is won.

Godzilla creeping into our lilac trees – before cutting back. 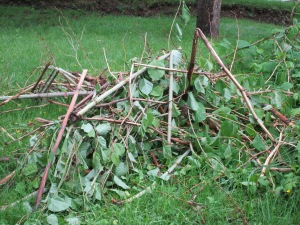 It’s cut but now how to dispose of it is the problem?

I sometimes wonder if I’m not becoming too obsessed with this weed and the many others that have cropped up this spring. However, I think not and am glad of the research I’ve done. I realise that if we here in VB and other parts of Nova Scotia don’t do something about “Godzilla” we could end up having the troubles that England has been having. What if our government deems it illegal should it get out of control? That is true of Australia. What if it causes much friction between neighbours who won’t do anything about it and let it spread to their neighbour’s property? This has happened in England. What if the value of our homes plummets if our yards are full of this obnoxious weed? This, too, has happened in England. I think we do have to look at this problem more seriously to prevent it from ever happening in our own communities.

Another invasive (the wild rose) which can get easily out of control if not cut back – constantly.

Without a doubt, I see the proliferation of weeds as my biggest headache with insects coming in as a strong second. During spring and early summer when I am trying to get the garden ready for planting and the yard cleaned up from the havoc of winter, I don’t dare go out to do the work required without first dressing for the part, or at least attempt to. Lots of bug repellent, legs and arms covered, socks tucked into pant legs to keep the ticks out, and a bug net for my head, complete my necessary attire for surviving the invasion of insects which seems to get worse every year. If I don’t take the time to dress for battle, I have to pay the consequences. Tick bites, if you don’t catch the little critters before they latch onto you, can leave a nasty welt, and if it’s a deer tick then watch out for one bite from one of these can get you for life if you aren’t careful. Thankfully, I and no one else here has ever seen any of the latter, but wood ticks are here… in droves! Then there are the black flies which are always waiting for me especially in the spring and early summer. Hornets, wasps and other winged creatures I no can longer put a name to seem to appear out of nowhere the minute I step into my vegetable garden to hoe, dig, seed, or weed.

Those plants that do take seed and pop up are then sitting ducks for every insect around so must be protected with various kinds of repellents which aren’t harmful to the environment. I have found many helpful suggestions on the Internet using such things as liquid soaps, beer, cayenne and a myriad of other concoctions. It takes time and lots of effort to do this, but at least it’s healthy and will help keep the insects at bay. My lettuce is looking very holely right now, but it still tastes good. In fact, a fellow gardener told me just yesterday that the aphid responsible for leaving the holes also leaves additional antioxidants for us.

Finally, we have many little critters such as chipmunks, squirrels, skunks, raccoons, rabbits, moles and deer …not so little…. which also can also be classified as nuisance factors when trying to grow things here in VB. It seems to vary from year to year. In Victoria Beach it started with the deer, but in the last several years skunks and rabbits have been joining the parade of pests. I quickly realised that a fence would be needed and since erecting the first one, I have been upgrading it ever since to make it harder for the critters to get in there for that lovely green lettuce. This year we are all noticing that our chipmunk population has exploded. So far they haven’t eaten any of my new growth, but they are leaving their calling cards… little holes in the flower and herb pots and dirt every where. Furthermore, there is something leaving much larger holes in the lawn. So far we can’t determine what or who is doing that …. skunks looking for grubs or even moles building their underground tunnels. Who knows?

Growing anything here is becoming more of a challenge every year. I have more weeds to pull, more insects to deal with, and more small critters to outwit. There is no doubt in my mind, that the changes in climate are the root cause of this, thus, creating even more challenges in the future. The question I ask myself is whether I am up to this? Perhaps I will be forced to rely on our local markets for our fresh summer veggies? However, if I am forced to give up this hobby, I know one thing: I will miss sitting down to the dinner table to eat the healthy and oh so tasty vegetables on my plate that I had the satisfaction of growing. For now this is a good enough reason for continuing my battle. 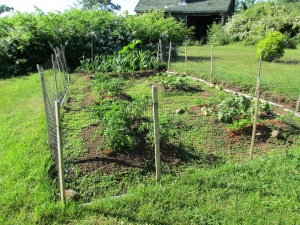 My garden as it is today. Can you find the plants amongst the weeds?

13 thoughts on “My Battle With Weeds, Insects, and Other Garden Pests”