In the minds of most Nova Scotians one of the worst things about summer is the end of summer. Where does the time go and why is it always the shortest season? Summer is by far the best season for us in Nova Scotia although some might disagree and say fall is better.

I have Hubby to thank for bringing to my attention that the end of our summer was fast approaching, and we had not gone anywhere. We needed to do something about this so came up with the idea to head out to the South Shore. We chose Shelburne which we haven’t visited for several years. Since we only had a day and a night, we had to narrow down our choices on what to see and do. I suggested that if we were going all the way over to Shelburne (about a three-hour drive from Victoria Beach) then we had to visit Lockeport, too. Upon reflection, we both agreed that our choices were good ones. Here are some reasons for saying this.

An overpowering sense of history is evident in Shelburne, once a thriving shipbuilding town. Walking along its historic waterfront on Dock Street, I found myself being transported back in time to 1783 when the town was established by Loyalists who supported the British. Today it still looks very much like it probably did back then, with its natural environment composed of forest, water and old, grey- wooded blockhouses. There are no power poles and wires to mar this natural landscape. They were all removed in 1994 when the “The Scarlet Letter” was filmed there. Since then, it has been a magnet for other films, such as “Moby Dick” and the TV series adapted from the “The Book of Negros”.

Historic buildings from the mid 1700’s.

Shelburne, originally called Port Roseway, was considered to be an ideal location for the capital of Nova Scotia. In those days it had the largest population of any other Nova Scotian town because of the huge influx of White and Black Loyalists who were fleeing from the American Revolution. Its harbour is the third deepest in the world which isn’t going unnoticed by the cruise ships now docking there. Of course, this is helping the tourist business and beginning to have the residents think about making it one more designation point for the province. 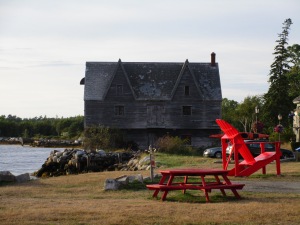 Looking toward the harbour where ships dock.

Our first stop after a rather unexciting drive along Highway 8 and the 103 was Lockeport. Our stomachs reminded us it was near lunch time so we decided to give the Seagull Family Restaurant a try. We weren’t disappointed after enjoying a delicious seafood chowder and blueberry buckle. I expect the restaurant got its name from the numerous seagulls who entertained us as we ate. They could have been a nuisance but weren’t because a sign leading to the outdoor patio clearly stated not to feed them.

Lunch on the patio of the Seagull Restaurant.

To work off our lunch, we decided to walk the 1.5 kilometre Crescent Beach which was just up the street from the restaurant. With its fine white – sand beach, and the brilliant, sunshiny day such as we had, I thought it has to be one of the most beautiful beaches in Nova Scotia, if not the world. The people here like to tell you that at one time it was featured on the back of our Canadian fifty dollar bill. 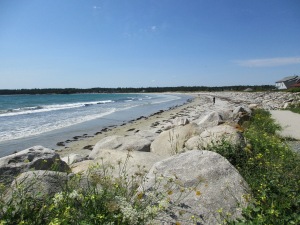 Lockeport, often referred to as “An Island to the Sea”, and at one time called the Ragged Islands, was and still is primarily noted for its fishing industry. The town is actually located on one of the islands as well as the mainland and can easily be accessed by a road which follows a narrow spit of land connecting the two. Or you can take the walking bridge.  There is not only gorgeous Crescent Beach but four other beaches nearby. How fortunate for those who not only live there, but also for the visitors who take the time to go there. I have to tell you we felt like we had the whole of Crescent Beach to ourselves the day we were there. I wonder if there were people on the other beaches – something I must explore another time.

Unfortunately, it is Birchtown’s sad history which has made it a destination that no visitor to this area should overlook. If you have read Lawrence Hill’s “The Book of Negroes”, then you will understand why I say this. Lest we should forget this moving story, a wonderful new Heritage Centre has been built…thanks to Emira and our two levels of government…. where we can learn about the hardships and injustices of all those who managed to land there. Did you know that at the time of their arrival in Shelburne they represented the largest free Black settlement outside of Africa? It is definitely worth the visit.

The museum and gallery inside the Centre.

Dining at the Charlotte Lane Cafe

I have heard many good things about this restaurant in Shelburne so have always wanted to eat there. My wish came true, thanks to Hubby, who insisted that we should try it. A winner of many awards, our eating experience did not disappoint. The setting, the expertly prepared food, and the service were superb. Kudos are deserved by not only the co-owner and chef, Roland Glauser, but also the lovely old house with an upscale gift shop. The place was packed so make a reservation. Although eating here can be quite expensive… but no more than any other restaurant of this class…the portions are substantial. I had one of their delicious pasta dishes which I could not finish. Without hesitation, our waitress packed up what was left resulting in another meal the following day which somehow tasted even better.

We stayed at MacKenzie’s Motel and Cabins right on the edge of town on Water St. The best thing about this choice was the breakfast which was included in the price. Although continental and serve yourself, there was plenty of delicious food with seemingly no limit to the amount we could eat. All the baked goodies were home-made… even the brown bread that accompanied the baked beans. Although a tad dated, the premises were well maintained and there was a lovely pool to cool down in after a long day of sight-seeing. This place is definitely good choice for an overnight.

A day and one night were not nearly enough time to see and do all these two towns have to offer. I wish we could have stayed longer to thoroughly experience the history, to walk some of the many trails and beaches, or to take a tour of the harbour. We must definitely keep Shelburne and Lockeport in mind for a future visit.