My latest post “A Wonderful Welcome to Viet Nam” mentioned three reasons for returning to this country. It should have been four.

Returning to Dalat is the fourth for me and a good reason for anyone visiting this country for the first time. If you like anything that is reminiscent of Paris or anything French, such as fresh baquettes, colonial architecture, an Eiffel Tower look- alike which happens to be the city’s radio tower, wide, tree-lined boulevards, and just plain old charm, then take a side trip up to Dalat.

Discovered and built primarily by the French when they occupied the country in 1912, it was an answer to their search for a retreat to escape the heat of Saigon. Dalat’s location at 4,900 feet above sea level offers a temperate climate where the yearly temperatures hover at 15 to 25 degrees C. It’s no surprise that over the years it has earned another appropriate title…”the city of eternal spring”. If you don’t like this title, then how about “city of a thousand pines”? The city has so many tall pines that you can actually smell them. If it weren’t for the usual traffic woes, I would have a hard time believing I was in Viet Nam.

My first visit to Dalat was five years ago. The city, I am happy to report, hasn’t lost its charm, and there are little if any signs of climate change. The one and only complaint I have is the constant traffic which is chaotic and noisy as it seems to be no matter where you are in Viet Nam. It’s just the way they drive here, and we either adapt or end up as toast.

There is a motor bike under there.

Dalat’s temperate climate in the Lang Biang Mountains has created an ideal place to grow things making it literally the ‘bread basket’ of Viet Nam. All kinds of vegetables, fruits, and flowers can be found growing year round. Their speciality is strawberries, black currants, and artichokes in the produce department, and when it comes to flowers, it has to be hydrangea and roses found just about everywhere throughout the city… lining the boulevards and hanging from lamp posts.

One of the best places to see what grows here is the Dalat City Park located near the Xuan Huong Lake. This lake was created after the construction of one of the area’s many dams resulting in one of the city’s main attractions. If you are one for walking, it’s a 7 km trek all the way around. I got marvellous views of the city from all angles because of the lake’s configuration which resembles a banana.

Looking across the lake to one of Dalat’s churches. 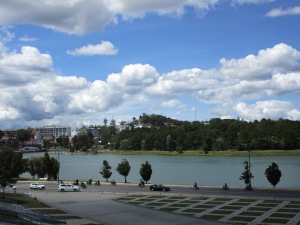 A view from the other side of the lake.

To some, the Park borders on the kitschy with its ceramic animals placed strategically amongst the flower beds, and the gaudily adorned horse-drawn carriages readily available to transport weary visitors. Nevertheless, the gardens themselves with their variety of flowers and shrubs are absolutely beautiful on a perfectly clear, sunny day such as I had. 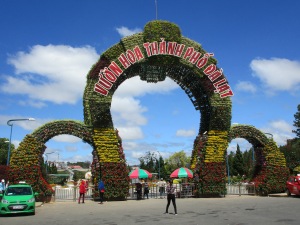 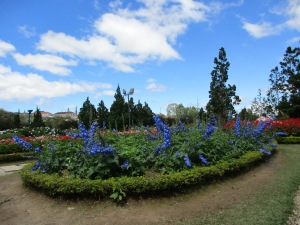 Coffee is another rapidly growing industry here putting Viet Nam in second place on the list of the world’s coffee producers. Their focus has been the Robusta type used primarily in instant coffee like Nescafe, but since its lofty position as number two coffee producer, the farmers are beginning to move over to the Arabica type and gaining recognition there. Coffee cafes are on every street corner, but most don’t serve Italian or American coffee – just Viet Namese which is very strong and sweetened with condensed milk. I find it ironic that most locals still prefer to drink tea.

Wine production is becoming a serious concern of late. It started with the French in the ’50’s and has now morphed into a viable industry. Dalat wines can be found throughout Viet Nam and Japan and other SE Asian countries are now importing it to good reviews.

Advertising Dalat wine at the Park.

Dalat, like all cities and towns of a certain size, has a market as one of its central attractions. Nestled between two hills in a tiny valley, it’s a beehive of activity any time of the day or night. Smack in the middle of the city, it’s close to a host of small hotels and hostels and great places to eat. My hotel was probably a ten minute walk away as ‘straight as the crow flies’, but in order to get to it, I had to go down one hill and up the other making my trip much longer. The city is very hilly so walking can be difficult as the streets seem to meander up and down and around. Walking around in circles can be frustrating for those of us who are directionally challenged.

Looking down on the market at night.

Every kind of fruit imaginable.

In spite of the heavy traffic, Dalat’s air is clean which was a real treat for me. Certainly its lofty location contributes to this, but another reason is because other than growing food, the only industries are in education and scientific research. Many schools were started by the French so Dalat quickly became a learning base for all Indochina. Today there is a large training school for teachers and a thriving university. Tourism is growing, too, as travellers and locals seek a respite from the heat in the south and the cold in the north especially at this time of the year. For the adventurous tourist, there is trekking, canyoning, and mountain biking. There are numerous minority villages to visit for handicrafts, silk farms, six good-sized waterfalls, pagodas, and lastly the number one attraction right now…the Crazy House.

Is it the name or is it the fact that the weird architecture of this house reminds tourists of Gaudi’s creation in Barcelona? Whatever it is, it’s become a ‘must see’ for anyone who visits Dalat. I have to admit I didn’t go to see it this time around because I toured it five years. My husband and I joined in the fun of exploring its maze of tunnels, climbing its ladders, and being constantly surprised by what lay ahead…spiderwebs, mushrooms, strange animals, with everything seemingly sprouting from the trees. A Mrs. Dang Viet Nga, daughter of the successor to Ho Chi Minh as Prime Minister of Viet Nam, received her Ph.D in architecture from Moscow. Her objective was to build a house which would bring people back to nature so she began with a giant banyan tree. It’s absolutely amazing what she has accomplished over the years. She is still alive and her creation has garnered the reputation as one of the world’s most bizarre buildings.

Outside of the Crazy House. 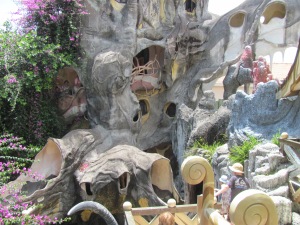 Yes, Dalat has much to offer tourists who come here, as well as the people of Viet Nam who are beginning to tour their diverse country now that they have the means to do so. The Viet Namese are romantics at heart so Dalat provides them with the perfect setting for their wedding pictures or a honeymoon. Roses, flower gardens, a beautiful lake setting, and hotels that cater to them, is this not enough? Apparently not, as not only locals, but bus loads of tourists will include a trip to the Valley of Love for even more love theme kitsch. As a mature, solo traveller I might have felt a little out of place so didn’t make the effort.

Dalat does have more serious attractions for visitors, however. The French left behind a noticeable legacy with their catholic churches exemplifying their gothic architecture. They are lovely to look at from the outside but, unfortunately, aren’t open for viewing.

However, there are numerous elaborate pagodas to visit reflecting the Chinese architecture. They are open for viewing. My choice was to check out the Truc Lam Pagoda. This zen monastery sits on top of a mountain to the south of the city and is easily accessible by cable car. After a hair-raising motor bike ride out to the lift, I was then treated to my own cable car for a 15 minute ride through the lush greenery of the pine forest. I instantly felt at peace and totally safe. What a fantastic view of the city and its environs! The grounds of the monastery were almost as peaceful save for some bus loads of Russian tourists who arrived. This wasn’t a problem for me as the grounds are so spread out and beautifully designed, providing many secluded spaces with tables and benches for sitting and meditating or just getting away from people. 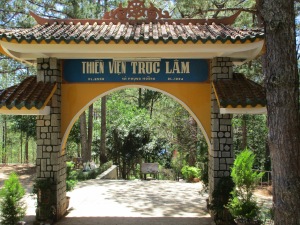 Entrance to the pagoda.

A temple with huge bell. 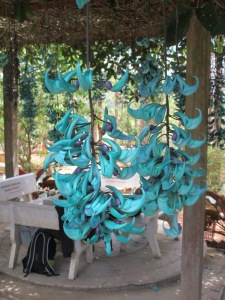 These are for real. Not sure what they were.

A quiet spot for some meditation. 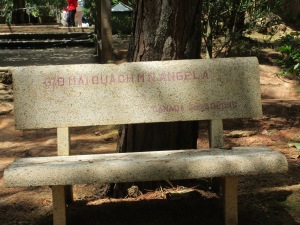 Zen affiliates from around the world have donated benches. This is from Canada.

Descending down a tree-lined path, I came upon Tuyen Lam Lake, another man made lake.

I was surprised to find stalls selling souvenirs and one in particular caught my buyer’s eye. Taking a chance and wandering in, I found some money belts handcrafted by a minority village in the area. They were a decent price so I bought some.  Over to the left, at the end of the lake, I spied some signs advertising food and coffee. Hot and weary, I decided to check them out. I didn’t see anything that whet my appetite until a restaurant advertising classic cars and ‘weasel’ coffee grabbed my interest. In case you don’t know, ‘weasel’ or civet coffee is made from this animal’s poop… and it’s expensive….way too expensive for my budget! However, since I hadn’t had my coffee fix for the day, I decided my caffeine treat would be a mocha latte…made with regular coffee. Yum! I thought this was an appropriate way to end my visit before heading back to the city. 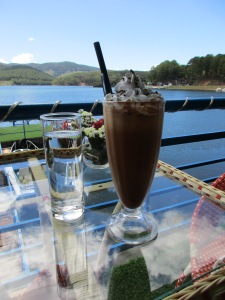 Would I return for a third visit? Without a doubt should the occasion arise. Dalat may not have the history and culture of other hot spots, such as Ho Chi Minh City, Hoi Han, Hue, or Hanoi, but it does have a comfortable climate and enough things to see and do to keep visitors there for at least a few days. Like the French over a century ago, we tourists are searching for a place that not only offers a relief from the sweltering heat, but also some of that irresistible French charm they left behind.