Can you imagine being suddenly thrust into the role of parenting 80 newborn babies dependent upon you for their livelihood. Could you cope?

This spring Julia Springob and Lou Barta of Port Royal were faced with this surprise when their ewes presented them with this number of very hungry baby lambs, far more than they ever anticipated. The norm for a ewe is to birth one or maybe two lambs so imagine their surprise when many of them birthed three and even four babies. Since motherhood was new to many of their mothers, they simply couldn’t cope with so many offspring at one time. This is where Julia and Lou had to step in, resulting in bottle feedings every two hours. They were literally on call both night and day for those first weeks. Thankfully they were down to three feedings a day when I visited their farm.

I must backtrack here to explain how I got the idea to do an article on the subject of sheep farming here on my “special road”. If I leave my house to go anywhere further than walking distance, I must get into my car to travel to our nearest town of Annapolis Royal or any other place in Nova Scotia. This amounts to at least several times a week. If you take a look at my post entitled My Road Well Travelled, (click here) you can find more information on what makes this road so special, not just to me, but many others who live and visit here. Each time I travel this road I pass Julia and Lou’s sheep farm, and every time I can’t resist taking a peek at those little lambs…plus several goats… to see just how quickly they are growing. It’s a heart-warming sight.

I became so intrigued with the idea of finding out more about the owners and their sheep that I made an appointment to interview them, resulting in a piece I had published in the Valley Harvester, our local community newspaper. This is what I found out about raising sheep in Nova Scotia.

After taking me on a tour of their farm to meet the baby lambs, witness their bottle feeding, as well as to meet the goats and the sheep dogs, I quickly realized that this idyllic farm is being built with an abundance of hard work and dedication. 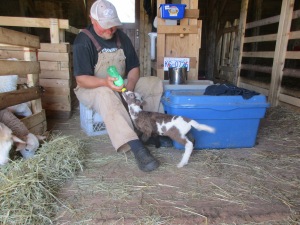 At last. Thanks papa Lou.

Sheep farming in Nova Scotia is a challenging business requiring lots of know-how and cash. A lover of lamb meat, I have always wondered why it isn’t so readily available in our grocery stores and is more expensive than beef or pork. Well, now I think I understand why.

Julia and Lou have been at this for a year now having moved here from British Columbia where they farmed on a part-time basis for 16 years. They decided to immigrate to Canada in 2000 from Germany. Julia’s native country is Germany and Lou hails from what was once Czechoslovakia. Their B.C. farm was located in the northern, interior part of B.C. in the Bulkley Valley halfway between Prince Rupert and Prince George. There, Lou drove a logging truck while Julia stayed home to raise chickens, turkeys, some beef cows. She also maintained a large vegetable garden providing food for themselves  and their neighbours. Lou’s yearning to be his own boss and their growing desire to go into full-time farming compelled them to take the plunge and begin their search for more land. With land prices in B.C. escalating, they turned their eyes eastward and with the help of the Internet settled on a picturesque farm in Port Royal.

In their first year, they have increased their flock of sheep from 45 to 60, not counting the newborn babies. In addition, they have seven goats, three guard dogs, and one herd dog, still just a kid being diligently trained to take on his adult duties in the near future. I think it’s a miracle they all survived their trip east and their first winter. Now in their middle years, Lou proudly announced, “We haven’t lost a single animal to any disease, climate or predators. We have an electric fence and our guard dogs to thank for this.” I would add that he needs to give credit to himself and Julia.

When asked what their greatest challenge has been so far, they both agreed it was the task of transporting the animals in two large trailers driven by Lou and a friend followed by a back trailer driven by Julia from B.C. to N.S. in just seven days

“It was the most arduous task we have ever had to take on” said Julia. “The weather was heating up in June, making it difficult to keep the animals cool. We were worried about finding places where we could stop for the night and not be an annoyance to the folks around us. Our animals would always make too much noise around feeding time.”

However it turned out that most people, when they heard what they doing, were more than happy to lend a hand in providing a place to park their vehicles with enough water for the hot, thirsty animals.

As Julia pointed out, there was one other high point during their trip which presented itself once they got here… the birth of a baby lamb in November!

As for how they feel after their first year in Nova Scotia and whether they are optimistic about their future here as sheep farmers, their reply was passionate in their quest to raise healthy and affordable food for local eating. Eventually they hope to provide their products to the community as they did in B.C. by starting small and relying on word of mouth. They see a future in this province for the small farmer who wants to join the ever-growing need to become more sustainable in food production. However, Lou did seem concerned about the government and parents not doing enough to encourage young people to climb aboard to take up small farming.

When asked what joy they get from their new venture, without hesitation they said:

For now they want to continue expanding their flock of sheep to the point where they can support themselves as well as their community. They also want to meet the standards as set by the province for producing healthy food products, which will mean obtaining all the necessary licences. Julia loves to make goat cheese, and she’s even thinking of the possibility of lamb pies and sausages.

However, in order to accomplish that she knows she will have to upgrade her huge kitchen to meet those food production regulations. Right now they are taking it all one day at a time, concentrating on increasing their flock to a sustainable level, and ensuring their lambs and goats are kept safe and healthy.