Sometimes waking up in the wee hours of the morning can be a positive experience. Studies have shown that it is often the most creative time of day for many people. I don’t know what part creativity played in my waking up at this time a few days ago, but what I do know is that it led to witnessing an attraction that has become one of the prime reasons tourists are flocking to Luang Prabang in Laos.

After nine years since my first visit to Luang Prabang, I am back again to see what changes have taken place. I am anxious to discover if this charming UNESCO city has managed to weather the scourge of too many tourists descending upon it, or if by some miracle it has managed to escape that and still be the peaceful place it was back in 2009.

Perhaps several days isn’t enough time to give it a thumbs up for managing to maintain its equilibrium but so far so good. This little city of about 55,000 souls appears to have kept its charm and is still fairly laid back compared to many other SE Asian cities. How has it managed to achieve this when others are struggling to keep up with the onslaught? I would guess it’s mainly for these reasons: 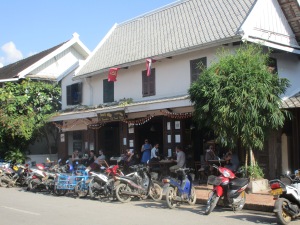 In 2009 I was one of the few tourists who managed to drag myself out of bed to witness the daily monk walk for collecting alms. What was once an overlooked daily religious event carried out every day in the wee hours of the morning from 5:30 to 6:30  by the monks has these days morphed into one of Luang Prabang’s top tourist attractions. This is not surprising considering how our world in just nine years has changed. The growth of our social media and the technology that drives it has been the stimulus for increasing the number of tourists who have put this event high up on their list of ‘must sees’. This has, in turn, given the locals in need of income to entice their visitors to shell out money for food to fill the alms pots carried by the monks. The result has seen some nasty incidents of improper tourist activities like snapping ‘in your face’ pictures of the monks…many are just young boys. It’s no surprise that such shocking behavior creating such a circus-like atmosphere has not gone down well with some tourists and locals.

The picture at the top of this page is a close up of the monk walk taken by me in 2009. Unfortunately, my camera would not co-operate in taking pictures this year in the dark.

I don’t know if the unusually cold morning we had here a few days ago proved this observation made by so many others over the past few years to be erroneous or not, but I am pleased to report I did not see any of this. The mini-vans, which pulled up along the route where I happened to be standing to unload eager tourists, was done with a surprising silence. I actually found it all quite eerie to see everyone walking around in the dark. We all had our cameras ready for when the monks would pass and the offerings made, with everyone respectfully staying a good distance away from them. I also witnessed how those tourists wanting to take part in the ritual of offering alms…sticky rice… to the monks were being instructed to do so in the reverent manner that such an occasion calls for by some locals.  As for the problem of other foods going into their pots such as packaged goods with questionable nutritional value being sold by local vendors to visitors and locals alike, this is a problem still to be solved. I read in the local newspaper that there is a movement afoot to address this problem by encouraging vendors to make their own edible gifts with rice and natural ingredients to sell rather than peddling the junk food which will undoubtedly cause more harm than good. Many of the monks have been throwing it out or giving it back to the vendors for them to sell again. The proposal is a good one but could be difficult considering all the people involved. At least it’s a start in the right direction which hopefully will have an outcome that will continue to honour this age-old custom.

Physically the character of the city hasn’t changed a great deal. The wats I have seen so far haven’t been altered and are as beautiful as ever.

The old shop houses lining the main street and the riverside streets are still there looking better than ever. Being a UNESCO city has forced this issue which the local authorities and property owners are adhering to. To accommodate the growing tourist trade, many of the buildings have been renovated into lovely boutique inns and more upscale restaurants. The Three Nagas where we enjoyed a gourmet meal in 2009 is still there but the prices have more than doubled. The cost of food has risen substantially every where, but good prices and good food can still be found beyond the centre and at the Night Market. An authentic Lao dish can be found on the street, especially side streets, for 15,000 kip which translates to about $2.50 Cdn. I can easily keep my daily food expenses under $20 which includes a delicious Lao coffee with a baked goodie at one of the many cool cafes. Also, Sysomphone Guest House where I am staying helps my budget by providing a decent breakfast as part of my accommodation costs.

So far I have not discerned any tremendous changes to the environment in and around Luang Prabang. Having two rivers running through it is definitely a plus for this city. How fortunate that the mighty Mekong River and its smaller tributary, the Nam Kham, should meet right in the centre and that they have maintained their beauty with no over development. The streets running along side of each of them are lined with quaint hotels, oodles of restaurants, and numerous spas and massage parlours. Furthermore, it’s all kept relatively clean making them a joy for tourists to stroll along either night or day. 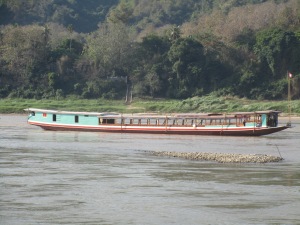 This type of boat is a common site on the Mekong used by tourists and locals.

With rivers there have to be some bridges. The one which has garnered the most tourist attention is the old Bamboo Bridge spanning the Nam Kham. Every year it has to be replaced after the high water levels produced by the wet season have washed it out. On the other hand, it does provide a safe walkway for the locals living on the other side and for the tourists who want to go over to observe how they live. Most of them are small farmers just eeking out a living who have no qualms to having visitors come over to see how simple their life is. For us it gives us a closer view of how the majority of people in this poor country still live. Only in Laos is it so common to see how the two can exist so closely together.

I am not only impressed with how the city has maintained its true natural character but equally amazed at how the people have accepted all its visitors. They are generally friendly and try to be helpful. Furthermore, their English skills are pretty darn good for which we can thank the monks. Many young boys who would never have had the chance to learn English in the public schools have received their schooling with English as the main subject from the monks. Seizing the opportunity to better their circumstances, they are choosing to enter the thriving tourist sector. For now, this is a win-win situation for tourists and locals alike. I wonder and so does the guide I had for a tour to a Hmong village yesterday about what the future holds for them.

Waiting for a passenger – the Lao version of a ‘tuk tuk’.

One of the city’s lovely tree-shaded streets. 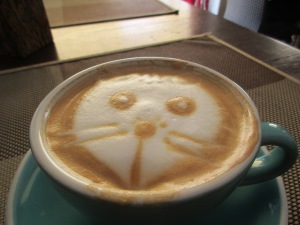