Why do you suppose that Cairns, pronounced Caans by the Aussies , attracts more tourists than ever before? With a population today of about 160,000 she has grown from a sleepy, laid back town to a city of night markets, a modern mall, souvenir shops, restaurants, and an active bar scene in just a few decades. Without question she has become Australia’s major resort town. In fact, she is often likened to Florida! Located in the far North of Queensland, she has two great assets: a tropical climate and home to one of the seven natural wonders of the world… the Great Barrier Reef. With 3,000 reefs and 900 islands stretching for 2,600 kilometers along the northern coast, this coral reef was designated as a World Heritage site in 1981. Ever since, Cairns has been experiencing phenomenal growth. 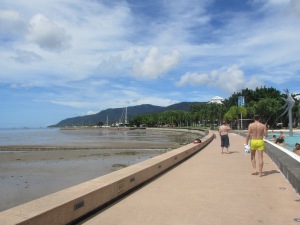 The promenade along the harbour in Cairns. 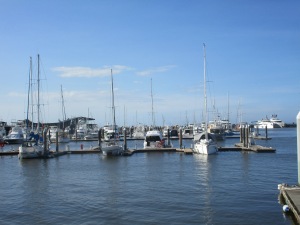 Northern Queensland is the only part of Australia that is green all year long. It’s tropical climate gives it two seasons: wet and dry. The wet season is anywhere from December to May when the area will most likely experience torrential downpours, cyclones, and high humidity. The dry season will last anywhere from June to November where there will still be some rain with more sun and less humidity.

When you fly to Cairns from Alice Springs as I did, you can’t help but marvel at the green carpet of forest and the blue water which suddenly replaces the barren expanse of Central Australia. Cairns sits in the midst of a tropical rain forest, and if you haven’t guessed by now she is the main jumping off place for those who want to visit the Great Barrier Reef.

One of many ships heading for the Great Barrier Reef.

The weather and the time of year precipitated a dramatic change of plan for my visit to Cairns. My lack of research beforehand and poor timing which was out of my control were the reasons. Torrential rains and cyclones are the main items on the weather menu for April in Cairns and the north. My first night there it poured rain for over twelve hours causing the wash out of some significant bridges and roads. I  heard before I ever got there that the area had been suffering from more than the usual amount of flooding while the rest of the country seemed to be in a severe drought, especially in the south. However, since Aussies take weather in their stride, unlike us Canadians where it’s often the main topic of conversation, they all assured me that it was not a problem. Nope the Aussies aren’t going to let bad weather interfere with their plans especially cruises and day trips to the Reef. This really isn’t so surprising since this is the main focus and livelihood for many people in Cairns  and the season for cyclones is a long one from December to May.

For two days after my arrival while waiting for the weather to clear, I had an ongoing debate with myself on whether I should even attempt to sign up for a trip to see this world’s wonder. Hadn’t I experienced the same predicament in Ecuador three years ago when I ran into bad weather in March forcing me to abandon the idea of even visiting what is known as the poor man’s Galapagos let alone the Galapagos itself. But I digress. By the second day, although it did start to clear,  the forecast kept changing depending on whom I talked to. I had only five days to play around with. My budget was taking a beating from the high cost of everything, especially tours to World Heritage sites. The last thing I wanted to do was waste my money.  On the one hand, I knew this would be my one and only opportunity to see the Outer Reef, but….and here lay my dilemma. First, there was the risk of even seeing anything since the waters were all churned up from the heavy rains. Second, there was the strong possibility of seasickness… my sea legs are wobbly at best. In fact, all testimonials indicated that before the tours even got underway, seasick pills were handed out for free to keep the tourists from messing up their vessels. Third, I have never been a raving success at snorkelling. Just getting dressed in the necessary gear is a challenge for me. Once I get it all on and plunge into the water, my mask insists on filling up with water causing panic because surely I am going to drown. Thus, the joy of seeing what lives beneath the sea is soon forgotten as I do battle with my snorkel. In the end, these three things, along with the cost, could not convince me that I should sign up for one of those expensive trips.

I had hoped I could master any previous problems I had with snorkelling so I put Cairns on my travel itinerary. After all, how could I go all the way to Australia and not go out to see the Great Barrier Reef? Well as I quickly found out there were other alternatives for me to consider which would be less expensive and not so intimidating. So instead, I opted to take a tour to Fitzroy Island situated  on the fringe of the Outer Reef meaning it was a shorter boat ride and less chance of getting seasick. Great. Moreover, once there I was free to roam around and choose to do whatever I wanted to do. I could even snorkel if I wanted to. There were trails leading to a secret garden in the rain forest and birds to see. There were at least two beaches. I could sign up to see the coral, sea turtles, and tropical fish on the glass bottomed boat, and to top it all off, I would get a delicious picnic lunch. To make this day complete the weather turned out to be almost perfect and the sea was calm. Although fleeting, the thought did occur that perhaps I should have taken the Outer Reef tour after all. 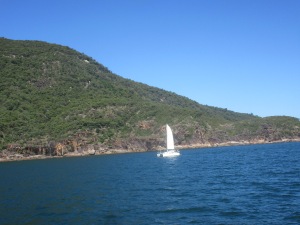 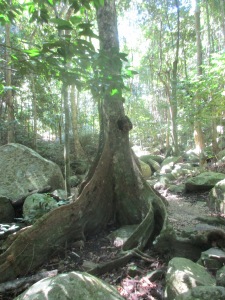 Cathedral tree in the Secret Garden. 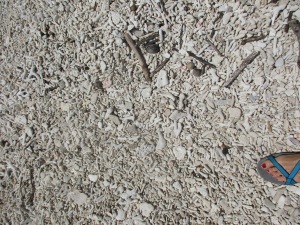 Where is the sand? This is all coral. 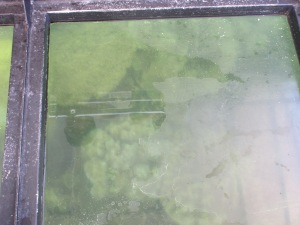 Somewhere down there is a sea turtle. 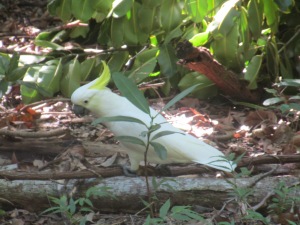 Ran into this white cockatoo on one of the trails.

The unsettled weather prevented me from taking in another popular tourist attraction not far from Cairns which I had hoped to do: a trip to the village of Kuranda up a steep ascent into the rain forest on the historic Kuranda Railway. However, part of the rail line had been washed out by the rains. I considered taking  a bus up there, but with the Easter weekend also posing problems with bus schedules that was impossible. No, it simply wasn’t meant to be. Therefore, I missed taking the scenic train ride as well as the option to also take the Cable Car on the way back or to, depending on your first choice. A friend told me how she had saved herself some money by doing the trip on her own by taking either the train or cable car going up and the bus coming down. We agreed that where possible it’s often best to forget the tour which not only costs so much more, but also crams in too much to see in too little time.  Kuranda also offers parks, such as the Tjapukai Aboriginal Park where you can learn about the Djabugay people with dance performances, didgeridoo lessons, talks on natural medicines, and art demonstrations. Then there is a zoo, the Koala Gardens, where only Australian animals are featured, and Birdland Park where the almost extinct cassowary can be found. With so many possibilities for sites to visit and things to do, I would have needed more than a day to do it justice.

Depending how you look at it, this trip could be considered a lost cause because I wasn’t able to see the two most important sites that Cairns is noted for. However, the way I look at it all is that at least I got to see and experience some of it which is always better than none. I also gained some valuable knowledge, not just about Northern Australia, but myself. Southern Aussies will tell you that they sure are different up there in the north. To quote a friend of the hilarious Bill Bryson* who has written two insightful books on Australia:

“They are crazy up there. Madder than cut snakes. You’ll like it up there.”

And, I did like it up there in spite of my setbacks. I don’t have any regrets for going and what I missed. The people were friendly and I didn’t meet any snakes. But as I said, I learned something about myself, too… I should forget the idea of becoming a snorkeler…time to accept my limits. I love being near the ocean but don’t put me in it. I’ll stay on the land and look at the sea from afar.

*Travel writer, Bill Bryson, says Australia is his favourite country. He has written two books on it and the people who live there: In a Sunburned Country and Down Under. I love his sense of humour and recommend these and any others he has written.

One thought on “Heading North to Cairns”