My travel bug to explore a new place or to revisit an old one  will often surface on a Sunday. Wouldn’t you know the bug decided to make its appearance on a recent Sunday that didn’t hold much promise for any sun, but at least no threat of rain in the forecast as far as I could see from the latest weather report.  We needed rain, but rather than wait around for some to come, I decided to chance it anyway. I needed to get out and about to explore. There would undoubtedly be cloud and fog  since I decided to visit an old haunt I hadn’t seen for several  years… the District of Clare. This is Acadian country  where fog rules whenever the sun disappears…which is often.

Clare  is the largest Acadian region in Nova Scotia on St. Mary’s Bay or Baie Sainte-Marie dating back to 1768. County Clare was the name adopted by the first English settlers who arrived there calling it after County Clare in Ireland. Today it’s officially called the Municipality of the District of Clare where both French and English descendents reside and conduct business. More than  60 per cent of the population today is descended from the Acadians who resettled here after their expulsion by the British from Grand Pre in 1755. Today Clare is one of the province’s most popular tourist destinations with its vibrant French culture featuring fantastic ocean views, Acadian cuisine, elegant churches, music and art. Second to their tourism is the prosperous ship building and fish processing industries all along this southwestern shore.

Since I hadn’t travelled beyond the town of Digby in awhile, I decided to make a couple of stops along the way to where the District of Clare actually begins. My first stop was Savary Park managed by the province’s Department of Natural Resources. By this time I had run into fairly heavy fog,. Nevertheless, there was hope as I could see the sun was struggling to break through. This is a lovely, little park with water views, well maintained campsites, and lots of grassy areas for sports and play. Except for a few family bubbles, I had the whole park to myself.

Entrance to the Park

Morning fog in the cove 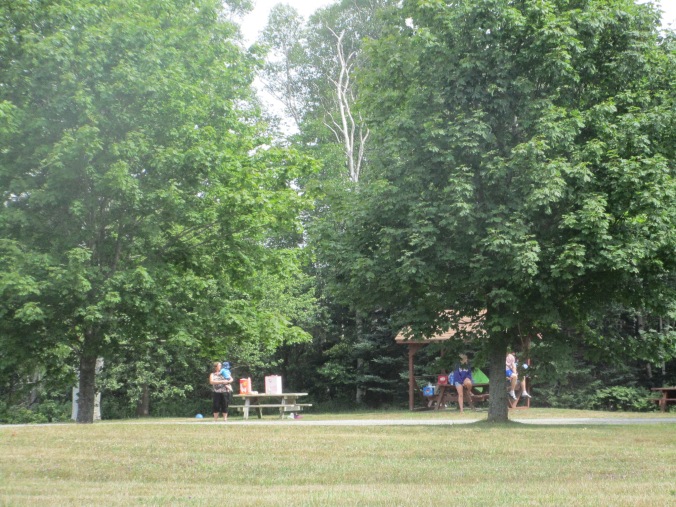 A family bubble enjoying an outing

My next stop was Gilbert’s Cove and Lighthouse which some locals have dubbed “the greatest little lighthouse in Canada.” Like so many of our lighthouses in this province, they came close to extinction due to vandalism and neglect when modern times and machinery replaced the need for keepers who actually lived in the lighthouses with their families. Luckily this one was saved by a group of dedicated volunteers who formed the Gilbert Cove and District Heritage Society in 1982.

Needless to say, when I was there the lighthouse was all closed up tighter than a drum. In normal times before COVID, it was a destination spot for its lighthouse tours, tea room, historical museum, local crafts, picnic tables and small beach for swimming and beachcombing. I did see a family swimming on the beach when I arrived, but other than them, I was the only one there, until as I was leaving another interested visitor was arriving. It’s sad to see these heritage places closed and looking so deserted, and I can’t help wondering what the future holds for them. Will the hard work that the local people have done to keep their history alive be all for naught?

My third stop was the St.Bernard Church in Belliveau Cove. I was now officially entering County Clare and what an imposing statement this Gothic Revival basilica  makes for what distinguishes the French culture from the English. Although I have been inside the church many times to take in a musical concert for which it has gained a distinguished reputation, I was still disappointed that it was locked up, too. This solid granite church, constructed in the shape of a cross, took 32 years to build. Beginning in 1910 the community banded together to lay large chunks of granite every two years to finally complete it in 1942. Once you enter the church, you can see why it has become a destination for music performances by choirs and orchestras from all parts of North America and Europe. The large stained glass windows allow for perfect light and the vaulted ceiling makes for perfect acoustics.

Just down the road from the church, I spotted another lighthouse perched at the end of a long wooden pier. From the road you can’t miss the Farmer’s Market which leads to the lighthouse. Hoping that the market would be open so I could sample an ice cream cone and see some Acadian crafts, I was disappointed again to find everything  closed. Apparently the market is open this year on Saturday mornings when local farmers come to sell their fresh produce. However, having stopped and found such a gorgeous view of the ocean before me, I decided I would take a quick walk out to the end of the pier to see the lighthouse. Just as I was getting ready to do that, my attention was caught by what looked like a neatly maintained walking trail of crushed stone hugging the edge of the very rocky beach. How come I had never seen this before, I wondered? Despite my intention to eventually get as far south as Mavillette Beach, my curiosity for where this alluring trail would lead got the better of me. Instead of getting on the road again, I  grabbed my camera and water bottle for a trek along the Belliveau Cove Boardwalk Trail which the nearby plaque said was 5 km from start to finish. This trail is not new. It’s been around for awhile and built gradually over the years by a group of dedicated volunteers with much of its funding coming from the community and contributions from those who use the trail. The plaque also stated that the trail is dedicated to the first Acadian couple, Marie and Joseph Dugas, who arrived there in 1768. 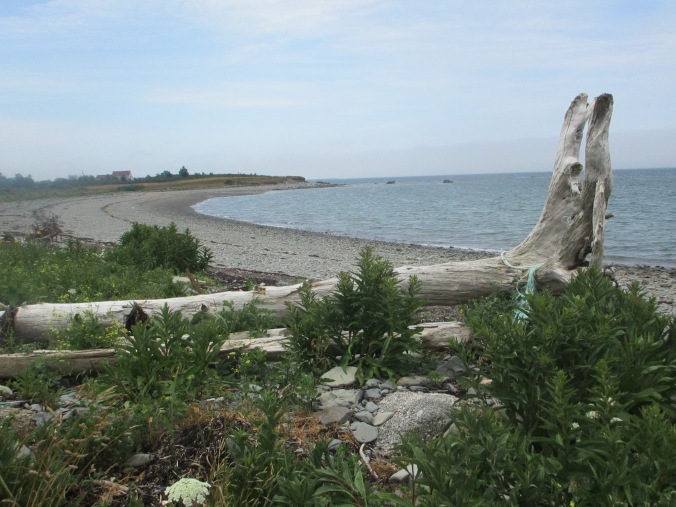 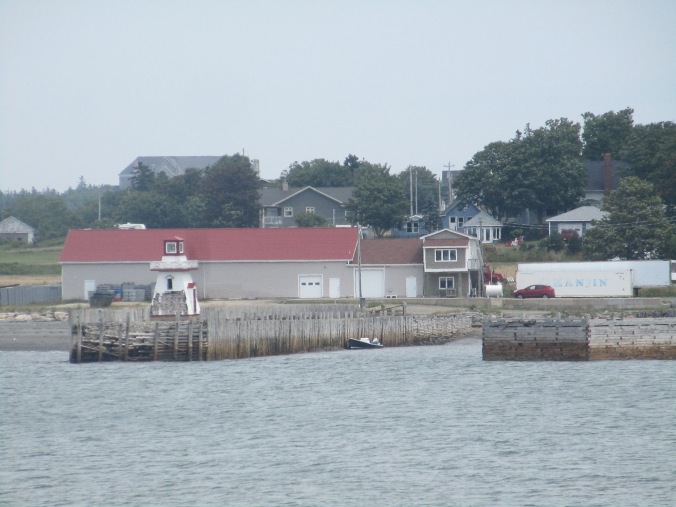 The pier and lighthouse from the Farmer’s Market.

The beginning of the Boardwalk Trail.

By this time, the sun had began to chase away the fog making it a perfect time for taking pictures. I felt compelled to capture the scenery that unfolded before me  by focussing my camera on the two contrasting views I witnessed on either side of the trail. To my right were the stoney beaches of St. Mary’s Bay with the wide expanse of the Atlantic Ocean in the distance. To my left was a sampling of the local ecology: tiny tidal pools, salt marsh grasses, wild rose bushes, and other sea plants that thrive near salt water. Quaint bridges over the pools of water, wind swept trees and driftwood completed the scene. This was definitely a photographer’s delight.

St.Mary’s Bay to my right.

On the left sea grass and tidal pool.

Windswept trees by the ocean. 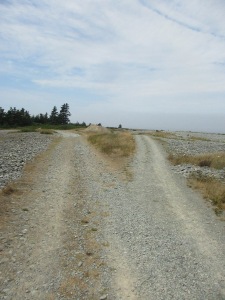 To the right or the left?

To the left and inland closer to the tidal pools and local vegetation.

Lots of little bridges to cross. 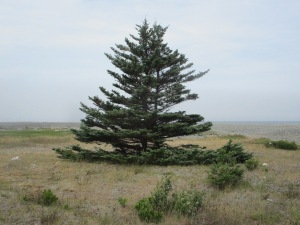 Another lone tree to the right.

Wild roses everywhere on the left.

Getting creative with garbage washed ashore from fishing boats.

Back to where I began.

By the time I had finished the loop, I was getting hungry so began to look for a restaurant that was open where I could sit and eat at a table. I realised I would have to give up on the idea of making it to Mavillette Beach. There was simply not enough time or energy for me to do both.  Because of the Fundy tides, you go to Mavillette more for the joy of walking on the beach than to swim.

Finding some food where I could sit down and eat became my priority, so I headed south towards Church Point, Saulnierville and Meteghan feeling optimistic I would find what I was looking for in at least one of these villages. I passed by La Cuisine Robicheau, the most popular restaurant in the area featuring great seafood and rappie pie often accompanied with traditional Acadian music. At four in the afternoon, it looked very quiet with only one car parked outside. Not keen to eat in an empty dining room, I drove on to see what might be open in Meteghan which is actually the largest village and shopping hub of the region.  There you can find Comeau’s Farm Market with a great bakery and local foods but it was closed on Sunday. If they had been open, I would probably have broken down and bought food to eat in the car and have for dinner that night at home. But they weren’t and I was no closer to finding anything where I could sit.

With hunger pangs growing by the minute, I decided it was time to head back with the hope that I would find a place which I had might have missed on the way down. A vague memory of eating at a nice little restaurant with cabins  surfaced to my mind. The more I thought about that place, the more I realised it was somewhere near St. Bernard so it had to be in Belliveau Cove. Luckily, my memory served me well. There was their sign in plain view along side of the road announcing that the Roadside Cafe and Cabins was open (no mention of ‘take out’) and, hallelujah, there were other cars parked in front! I wouldn’t have to eat alone. The minute I opened the door, I knew this was the place and it would be good. I was greeted by a smiling young waitress at the front desk and a man behind her in what looked like the kitchen…so he had to be the chef… who looked up from what he was doing to give me a cheery nod and another welcoming smile. Right away I felt like I had come home!

In the company of a handful of other patrons all spaced appropriately in our individual leather- seated booths, I tucked into a lobster, bacon, and grilled cheese sandwich which was absolutely delicious. It came with french fries which I declined, and glad I did because I couldn’t even finish the three over- stuffed sandwiches placed before me. I ended up leaving with a ‘doggie bag’ which I had later that night for supper. All of it was washed down with great coffee to keep me awake for my trip home.

Although I didn’t achieve my goal to visit Mavillette this time around, I have no regrets. There is always another time and many more Sundays when I am sure the travel bug will strike once again. This particular Sunday turned out better than I ever expected in spite of the weather. I discovered the Belliveau Cove Boardwalk which has to be one of my best treks ever, and I had a delicious meal to top it all off at the Roadside Cafe and Cabins. With much more to see and do all along this southwestern part of Nova Scotia, I will definitely return to explore more of County Clare with its French heritage and to walk Mavillette Beach once again.