With the advent of autumn and the return of the sun after hurricane Teddy’s recent visit which fortunately did not bring the forecasted winds but did leave us a substantial amount of much needed rain, I was eager to take my car out for a run to do some exploring. With only a few hours to spare, I opted for a quick trip to the North Shore on the Bay of Fundy side of Nova Scotia.

My first stop was the small fishing village of Hampton where you will always find lobster boats tied up at the wharf ready to head out to sea. This scenic village is a favourite location for cottagers from all parts of our province, some from other provinces in Canada, and a handful of Americans who have brought the village to life every summer except for this year, thanks to COVID. Every Canada Day in early July, the Hampton Lighthouse and Historical Society has been hosting a successful lobster dinner as a fundraiser for their lighthouse maintenance. However, not wanting to accept defeat by the pandemic, they decided to offer the same dinner as a ‘take out’ instead.

Things were quiet when I arrived except for a few curious people walking the rocky beach most probably searching for stones and driftwood treasures offered in abundance by the Fundy. I didn’t want to take the time to walk the beach so headed in the other direction to see if there was any action on the cliff where the cottages are located. Unfortunately, they looked quite deserted. The only sign of any life was a car stopped in the middle of the road with a man and a woman appearing to be looking at what I thought was a map. I stopped and asked if they were lost and whether I could help them? Not at all: they were observing  a bird…a huge black one with a brilliant red crest on his head. We quickly agreed that he was some kind of woodpecker but never had we seen one so large. After lots conversation about birds and other things that curious travellers discuss when out for drive, along came another youngish woman with a huge camera. We flagged her down to find out if she could tell us more about this handsome bird. Without hesitation, she confirmed for us that it was indeed a woodpecker and that he was a Piliated Woodpecker  commonly found in the southernmost regions of Canada and throughout the eastern part of the US. Since that day, I have heard from others that more than usual have been sighted here in Nova Scotia this year. No doubt he is another gift left to us by climate change and COVID. 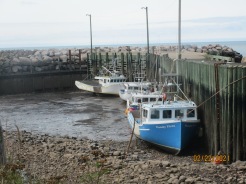 Lobster boats waiting to go out to sea. 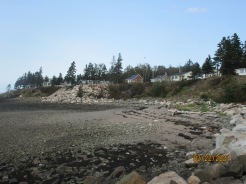 Cottages on the cliff over looking the beach in Hampton 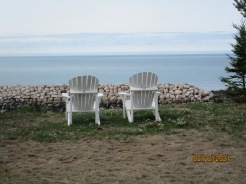 Inviting spot to rest and look to the sea 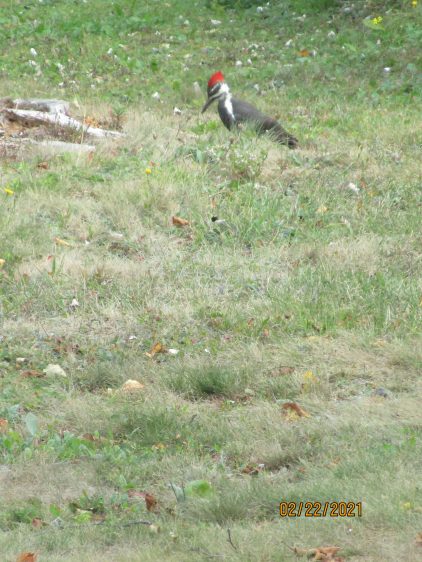 Does he remind you of Woody Woodpecker?

My next stop was Port Lorne, another small fishing village where  the proverbial harbour offering shelter for lobster boats and another rocky beach are the main attraction. Founded in 1874 and at first named Port Williams, it had to change its name a few times before settling on calling it what it is today…Port Lorne. 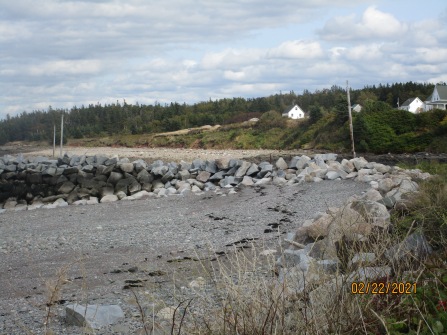 The beach at Port Lorne 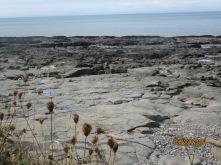 Looking out to the Bay of Fundy 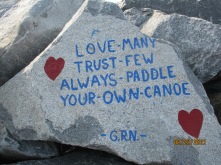 I should point out that anyone driving along the North Shore Road will soon discover that the road doesn’t always follow along the waters of the Bay. Once you leave Port Lorne, the road forces you to take a short detour inland where you could continue on to Outram and Mount Hanley and encounter some decent sized farms. The alternative is to get back to the Bay again by taking the road to Port George…my next stop.

I would hazard to guess that Port George is probably larger in population than Hampton and Port Lorne. Year round homes tend to outnumber the cottages in this village. Furthermore, with such sites as Cottage Cove Provincial Park overlooking Dunn’s Island where you might spot seals gathering there at various times of the year, a community owned lighthouse shaped like a pepperpot, the Old United Baptist church with its distinctive steeple, and a seasonal gift shop filled with artifacts made of driftwood washed ashore by those Fundy tides, you have much more to keep you there for awhile. Of course, it also offers that other favourite pastime that visitors enjoy…beach combing. Driftwood, smooth, perfectly shaped stones, and pieces of colored glass have caught the eye of many a creative visitor.

For those of you who might be interested in a short history of this scenic village, it was founded in 1760 and thought to be named after George 111. Unlike its neighbouring fishing villages, it developed into a thriving centre for shipping lumber and agricultural produce to Boston in the US as well as St. John in New Brunswick.

Does this resemble a pepperpot? 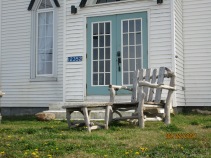 Driftwood chairs in front of the church 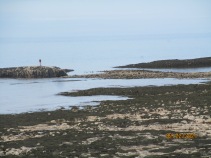 Visitors can walk to Dunn’s Is. when the tide is low

By the time I was finished looking around Port George, it was getting late so I immediately headed out for Margaretsville which I had designated as my ‘go to’ place to visit when I started out on this trip. Margaretsville is north of Middleton which puts it closer to the northern part of the Annapolis Valley where the terrain definitely reveals greener pastures with more prosperous farms. 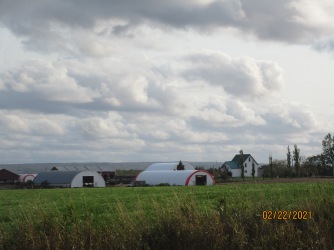 On the way to Margaretsville 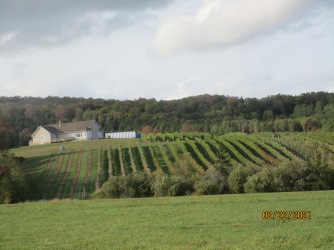 I have always loved visiting this quaint village because it is or was more than a fishing village. Over the years, it morphed into an active cultural centre. Nova Scotian as well as talent from other parts of the world  have journeyed here to entertain the local and summer time residents at the  Community Centre.  An art gallery called “The Art Shack”, owned and operated by local artists who formed the Artists’ Circle, was another addition to their art scene. Sadly, both projects were shut down for the summer because of COVID, making the whole place looking forlorn and a bit neglected. There was nothing open, not even the tiny coffee shop. Some of the cottages looked as though they hadn’t seen their owners for some time and were beginning to look the worse for wear. 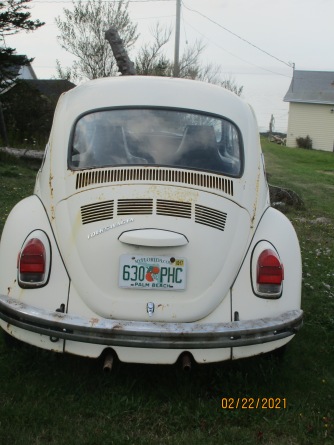 Waiting for the return of its owner from Florida 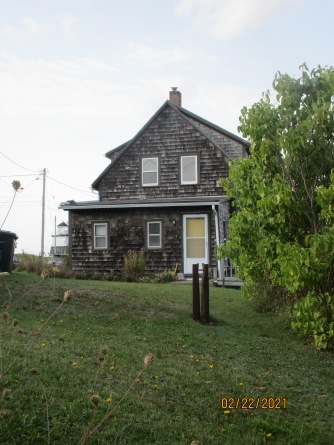 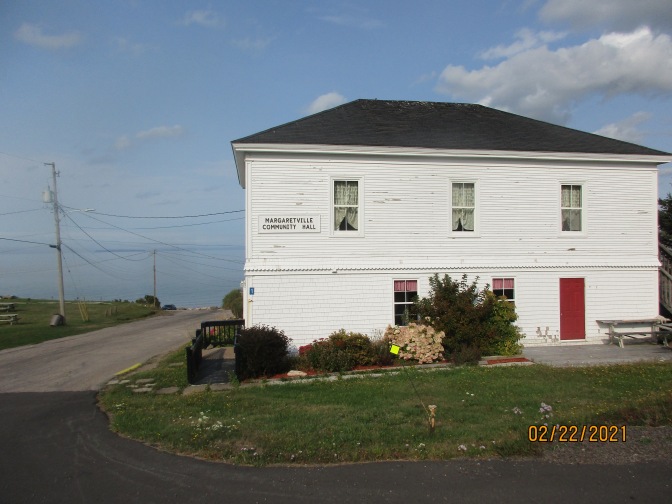 Community Hall all closed up

Margaretsville was first settled by Dr. J. Haliburton in the 1780’s. A loyalist from Rhode Island, he was granted land in the area which he named after his wife, Margaret.  In 1859 the people of Margaretsville realised the need for a lighthouse to guide the increasing number of trading vessels plying the shores of the Bay of Fundy. This lighthouse still exists today. In fact, it gained a bit of fame when in 1967 it was put on our Canadian 5 cent stamp… at least it’s thought it was this lighthouse because of the black stripe around its base. You never know in Nova Scotia what is real and what is folklore. Locals do like to brag about what makes their community just a bit better than any other. 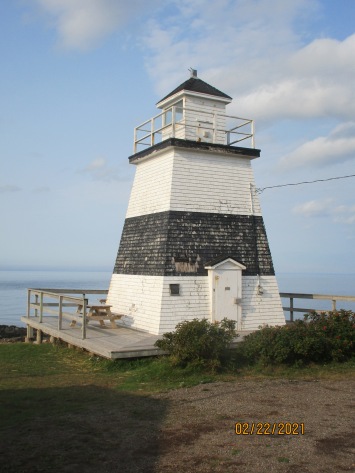 One of the shore’s oldest lighthouses 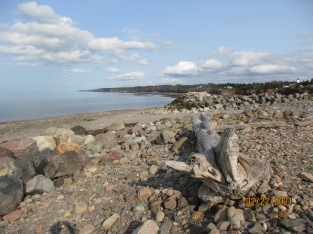 Note the piece of driftwood 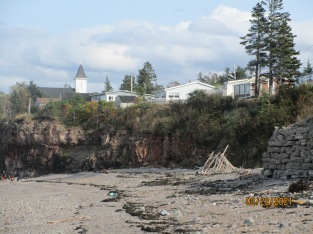 Cottages overlooking the beach in Margaretsville

Whatever the history behind the lighthouse, it still remains a focal point for this village. Having weathered many storms, it and the nearby wharf have had extensive renovations done to them. In 2018 after part of the wharf was carried away in a strong wind storm, one of Margaretsville’s benevolent summer residents from Texas raised enough funds from his American friends to pay the bill for the wharf’s refurbishment. The people also recognised the importance of preserving the wharf as a breakwater for any further erosion to their shore. This was definitely a wise choice as every year this province loses a little more of its coastline due to the erosion that every storm brings with it. 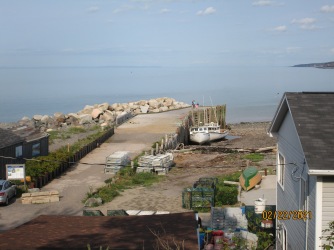 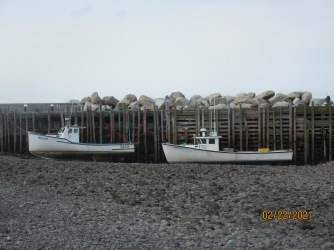 Providing a safe haven for the boats

There are numerous other little villages to explore as you continue going east or up the shores of the Bay of Fundy which eventually ends at the Minas Basin. I hope to continue the rest of this journey next summer. For now I am happy to have begun my explorations of this province’s unending coves and inlets thanks to its unique coastline.

* In my posts on Nova Scotia I have often referred to the Bay of Fundy and its high tides.  In fact a few years ago this whole region was on the list to become another of the world’s UNESCO sites but was beaten out by Viet Nam’s Halong Bay.  The distinction of having the highest tides in the world is due to not just the formation of the Fundy but also the natural force of the moon and the earth’s rotation. The Fundy tides have become a rare phenomena because of the huge volume of water rushing in from the Atlantic Ocean and the unique funnel shape created by the Fundy’s depth which causes an “oscillation effect”. This funnel increases the water’s height which then results in very high tides. The maximum height of the water is 11 meters in Margaretsville. This gets higher the further up the Fundy goes rising to as much as 16 meters at the Minas Basin. The Bay experiences two high tides every day. Of course, high tides mean low tides resulting in beaches with lots of rocks to walk on and driftwood to collect.