I feel very blessed that I had the opportunity to celebrate the beginning of 2014 in Chiang Mai this year. Because of the warm climate, I could enjoy the festivities the city had to offer in relative comfort. If I were home in Nova Scotia, I would have spent the holiday inside and if I dared to venture out, I would have had to bundle up in heavy winter clothing and still probably froze to death since I’m becoming more sensitive to the cold as I spend my seventh winter in Thailand.

This year I had my husband with me which made it all that more special as he is so good at mixing and mingling with the crowds. I don’t meet nearly as many people when I’m on my own travelling because I tend not to go out so much. Last year I was in Bangkok and went to bed around 11 p.m. only to be awakened with the noise of the thousands of fire crackers that went off at midnight. I rather wished that I had been a part of that. It’s only natural to want to share the hope the New Year offers with someone close to you whether it be family or friends.

We started off our festivities with a delicious meal at Peppermint restaurant, a restaurant we’ve been before and never been disappointed. Run by two Thai sisters, the food is a nice blend of Thai flavours and Western cuisine. We had their new addition this year which was a 12 inch three cheese pizza with just the right amount of Thai spices, tasty cheeses, and a perfect crust. I had my favourite drink – passion fruit shake. G had his usual glass of red wine and a small Thai beer. As usual during our dinners out, he manages to engage someone in conversation and at Peppermint, it was a young woman from Brazil who recommended that we visit some of the Wats (Buddhist churches) which were putting on special services.

The first one we dropped in on had the most beautiful array of lights burning everywhere and visitors even had the opportunity to sit and meditate with the monks and listen to their chants. They were giving a sermon on “right living” in Thai which was eventually to be given in English, but because it seemed to go on so long, we decided to give this a pass so we could see some others as well as get to our final destination where there was entertainment and fireworks.

On the way, we were drawn into another beautiful wat where we found people recording their New Year’s wishes and attaching them to  twenty baht bills which they hung around the wat. As we continued walking down Rachedumnern Road towards ThaPhae Gate, we came across many people lighting a fire at the base of a paper cylinder shaped lantern which they then released into the sky. Sure enough when we looked heavenward, there were hundreds of orange lit lanterns hanging amidst the stars. It was such a beautiful sight which, unfortunately, I could not capture on my camera. I was beginning to see that the Thai approach to the new year is to make wishes and hope that by whatever mode they employ they will have a better year than last. They don’t approach the whole thing by making resolutions on their own which they most probably will break.

We reached our final destination about 10 p.m. and just in time to find a viewing spot on the third level of Starbucks coffee. We purchased hot chocolate so we could legally claim a seat and were lucky enough to squeeze ourselves between a nice young Dutch couple and two Chinese girls. The entertainment put on by Thai singing stars really rocked priming us all up for the big countdown. Needless to say, in the space of two hours we got to know all our young neighbours and really got caught up in sharing their enthusiasm. The fireworks continued long after midnight showing us that the Thai really love to celebrate and will go to any expense to do so. The restrictions here seem to be more lax so we won’t be surprised to hear and see them for several more days.

After celebrating the New Year in Chiang Mai and watching the festivities around the world, I concluded that for all the people involved in putting it all together and for those taking part as observers that we all seem to have one thought in mind, and that is one of hope. May this year will be better for us both personally, for our families, for our country, and for the world than the year before. Of course, the skeptic in us says it won’t be much different, it might even be worse, but isn’t it human nature to want to hope it could still be better anyway? Who was who said that if we don’t have hope then we have nothing? 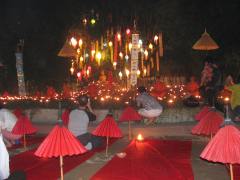 Meditation at  the  wat 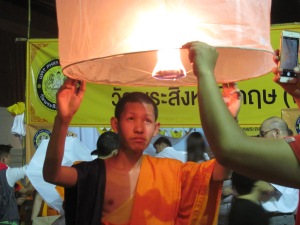