Phnom Penh has a way of slowly creeping up on a first time tourist like me. My first impressions of the city weren’t too positive but after four days, I’m starting to like this city which is the capitol of the Kingdom of Cambodia.

We arrived early Saturday evening by plane and had our first introduction to the city’s traffic with a tuk- tuk ride from the airport to our hotel in the centre. Like so many of the South East Asian cities the traffic is often chaotic with Phnom Penh being no exception. We were amazed at how relaxed the drivers on all types of wheels appeared to be as they weaved themselves in and out of the haphazard flow to find the easiest way possible to get through the dense traffic. To us it seemed that cars, motorbikes, and tuk-tuks were coming at us from every direction but to our amazement no one hit us, and we arrived all in one piece.

The next day we had to brave this traffic in order to reach the sights we had chosen to see and found that we were able to cross busy streets with relative ease. The most difficult part for me in the walking was trying to dodge all the debris and garbage on the side walks and in the streets. We found out later that there had been a garbage strike last week so that explained some of it, but, unfortunately, I’ve heard since that PP (Phnom Penh) has really never been known for its cleanliness.

Not a pretty sight!

Another upsetting observation for me is the disparity between the rich and the poor which is evident everywhere one goes. I have visited Laos, Viet Nam, and Myanmar (I am leaving Thailand out as it’s not really considered as a third world or undeveloped country any more) but never found it to be quite so visible as it is here in PP. One can be walking along a street and see huge homes hidden behind ornate gates and right next door is a run down house or shop or even people who appear to live on the street. The construction of what appears to be high-end hotels and condos is also a part of the scene. Maybe life is improving for some Cambodians,but many are suffering because as this development takes place the cost of living is going up and, of course, we know who is going to bear the brunt of all this. Another effect of this rampant growth and disparity is the protesting from the garment industry workers that has been going on here and making the news. Cambodians are finally getting upset enough to speak up and it’s about time since they have suffered through one of the most corrupt governments for years.

One of many large, stately homes in Phnom Penh. 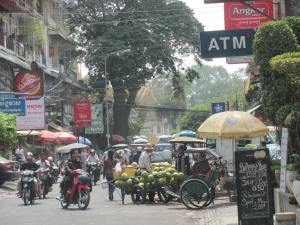 My first impressions were enhanced primarily by the filth and the disparity, but it hasn’t taken me long to get past all of this to discover the true spirit that prevails in this little country that has suffered so much over the years. The Cambodian people are quite simply very nice and gentle people. They always seem to have ready smiles and can have a wonderful sense of humour especially the tuk- tuk drivers who just laugh when we refuse to take them up on their offer of a ride which happens to be but a block or so away. The city has no lack of tuk- tuk drivers. We are hearing stories of teachers taking up the profession because the pay and stress of being a teacher here is so low. I’ve also found the people I’ve had the opportunity to speak to can be quite open and easy to get to know.

Graham with one of our friendly tuk- tuk drivers. 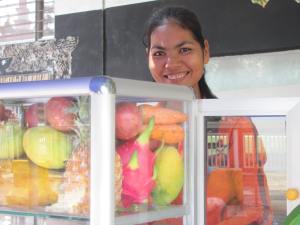 Although PP is a fairly new city architecturally, it does have a long history with ties to the famous Khmer people of the north who have given us the beautiful temples of Angkor in Siem Reap. Having been under the control of the French for almost one hundred years ending in the 1950’s, there are many beautiful buildings reminiscent of their rule – the most famous being the Royal Palace and the National Museum both of which we visited. The museum has the largest collection of Khmer artifacts in the country, and the Royal Palace still serves as the official residence of the King and for various court ceremonies. The present King has no political powers at all and from what we can gather doesn’t make many appearances other than to perform some Royal duties. The present Prime Minister wields all the power and has been for more than 15 years which according to many Cambodians is far too long, hence some of the protesting that has been going on. The Palace and the grounds are stunning and also boast of harbouring the famous Silver Pagoda which derives its name from the silver tiles on the floor. It also houses an Emerald Buddha.

The National Museum and courtyard.

Other sites a tourist needs to see, and we will do so when we come back here in three weeks is the Killing Fields and the Genocide Museum both legacies of the horrible era of the Khmer Rouge and Pol Pot which will be very sobering.

On a more uplifting note, no description of what this city has to offer to the tourist would be complete with out some mention of the many restaurants, cafes, and bars. We are not interested in the night life other than to find a good restaurant where we can have delicious food at affordable prices, and we have found that in PP. We’ve had Khmer food, Vietnamese, Indian, Italian, and all good. I am also thrilled with all the great cafes serving delicious coffees and pastries in the French tradition. Many of them serve lovely lunches with an emphasis on healthy salads and sandwiches. All our meals have been in a price range of $3.50 to $7.00 per person which is a bit higher than what we would pay in Thailand  because here in Cambodia we pay for just about everything in American dollars instead of their local currency.

One of those healthy salads.

As I mentioned at the start, Phnom Phen has a way of creeping up on anyone who comes here whether as a tourist like me or someone who arrives to work on some kind of humanitarian project. There are many Non Profit Organizations and Christian churches working here helping the Cambodians to improve not only their education and health, but also their ability to rebuild their country after its near devastation from the Khmer Rouge in the ’70’s. It’s hard to believe that PP was almost totally devastated by the time the Vietnamese came in and took it over from the Rouge. Apparently the city was a shambles and had to be almost completely restored from scratch so it’s quite astounding at what has been accomplished since then and continues as we have witnessed with the construction that seems to be flourishing everywhere. One can only hope that it doesn’t get out of hand which it seems to be doing now that China has entered the scene. Let’s hope that the resilience of the Cambodian people and the humanitarian efforts of the NGO’s will continue to prevail and help the country to achieve the independence and prosperity they so deserve. 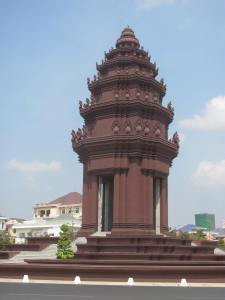 3 thoughts on “Soaking Up Phnom Penh”