If you read my previous post Soaking up Phnom Penh, you might remember that the best part of this complex country for me is the beautiful people who live in it. It amazes both my husband and I, and just about every traveller we have met in the past few weeks, how the Cambodia people have managed to come through the terrible killings of the Pol Pot regime in the ’70’s not to mention the hardships since then, yet still welcome all the tourists who are discovering their country with smiles and what appears to be genuine hospitality.

However, I shall begin by relating some of the highlights and the people we met in the past few weeks as we headed down to the south and the beaches of Kep. From time to time we have heard travellers repeat this mantra: “You have to go to quiet, laid back Kep before it changes into just another tourist resort.” With these words ringing in our ears and a desire to just be a typical tourist at the beach for a while away from the dirt and noise of the cities we had been in over the past two months, we  booked ourselves into the Q Bungalows for ten days.

This little resort is owned by an older couple from France and Italy who have chosen to fulfil their dream of running a guest house which just happens to sit on an ideal piece of land sitting at the base of a small mountain facing the Gulf of Thailand. Our weather was perfect with hot days tempered by cooling breezes from the ocean with surprisingly clean water. As an added bonus, our place had one of the best swimming pools around. Close by was the Crab Market where not only crab but many other fish are caught giving rise to a dozen or more fine restaurants offering delicious fish dishes. The secret to the great cuisine we sampled is the yummy Kampot pepper sauce made from the peppercorns grown in this region.

Not only did we do much reading, swimming, and eating, we also managed to take in a couple of sight-seeing trips. One of them was a boat trip out to yet another about to be developed place named Rabbit Island, which still has that really rustic look. It offers a limited number of small bamboo huts for accommodation, a few restaurants offering happy hours starting at eleven o’clock in the morning, a lovely beach, and about five hours of electricity a day. It’s still the perfect place to escape to for now, but probably not for long. 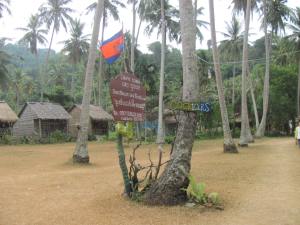 Our next stop was the nearby town of Kampot for which the peppercorns we had been eating in Kep are named. Kampot lies on an inland river making for a pretty setting and was once the centre for the French colonials who lived and worked there when Cambodia was a protectorate of France in the mid 1800’s. Today many of their mansions are just crumbling remains but some are being restored to their former glory by wealthy foreigners. Kampot has a certain charm and definitely a very laid back atmosphere which seems to be growing on foreigners from Europe, the US, and Canada at a growing rate evidenced by the many who choose to live and set up a business there. We have heard some say it’s the next Chiang Mai as a choice for ex-pats to retire to. 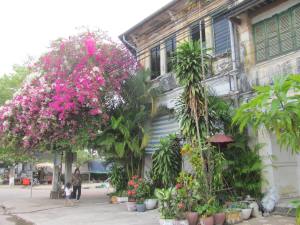 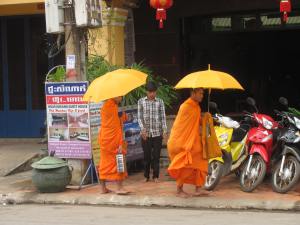 Monks doing their morning rounds for food or a donation.

From Kampot we took a bus up to a the Meas Family Homestay mid-way between there and Phnom Penh. This family homestead and farm has been in the Meas family for three or more generations and is now run primarily by a wonderful couple, Siphon and Mach and other family members, who survived the Pol Pot years. Both are teachers who are supplementing their meagre teacher’s salaries by opening up their home to tourists like us, running an after school program for young students who want to improve their English, and setting up a weaving centre to provide employment for the very poor women in their area. We spent two days there not only helping out with the|English class and buying scarves woven by the women, but also eating delicious Khmer home cooking. This dynamic couple is certainly an exception to the norm and are a good example to us and other Cambodians that they can heal and begin to move forward. 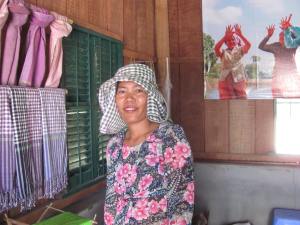 Siphon modelling one of the centre’s scarves. 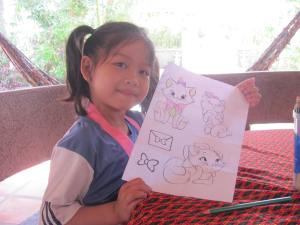 Siphon’s niece showing her colouring with such pride.

Now, we are back in Phnom Penh rounding out our final days in Cambodia with a visit to the Choeung Ek Genocidal Centre, one of the 300 killing fields that blanketed this country during the rule of the Khmer Rouge, and the Toul Sleng Museum which was the S-21 prison. These two sights are memorials to the over three million people who were killed under this cruel regime which ruled from 1975 to 1979. The horror of this period is sometimes just too much to even comprehend but it did exist, and those Cambodians who are responsible for making these sites available for us to see did so that we might all witness what took place and be aware that this sort of madness has not only happened in their country but in many others, and that we must always be vigilant.

A memorial to all those who were killed at Choeung Ek near Phnom Penh.

We also had the good fortune to visit one of the many garment factories here in Phnom Penh, thanks to my husband’s ability to easily strike up friendships in some of the churches he visits in our travels. A Canadian couple who live and work here are involved with a centre which has been set up by another enterprising young Cambodian couple at one of the sites. This couple has worked long and hard to establish a school on the premises of one of the garment industry complexes where they used to work themselves. The school teaches English and computer skills to the workers who attend in the evenings or after their work shift. They have also got a card making business up and running to help some of the workers make a little extra money. Their wages from the factories, even though they recently got a raise, are still very low so many of them are looking for ways to supplement this by taking on extra work. It’s really encouraging to see them take advantage of such opportunities to get ahead. 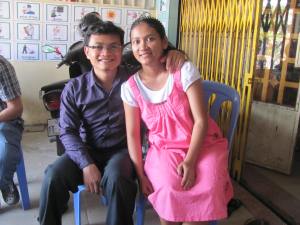 Rota and Sitan at the garment factory centre they have set up and run to teach English and computers to the workers.

Not one to just be a tourist taking in the sites, I wanted to know more about Cambodia’s history and hopefully learn more about them as a people. I was particularly curious as to why most of them are so accommodating to us tourists, and why we are always greeted with such lovely smiles when we know that their past has been so violent and unsettled. Shouldn’t they be sad and perhaps be working hard to get as much money from the tourist as possible?  After all, not only have they suffered so much, but they are still one of the poorest countries in the world. How can they appear to be so happy and satisfied with their plight? To get some answers I read an eye-opening book titled The Curse of Cambodia by Joel Brinkley, a former New York Times reporter, editor, and foreign correspondent, who covered the demise of the Khmer Rouge in 1979. My curiosity was sated, but I was saddened to learn that much of the population is still suffering the after effects of the genocide carried out by the Khmer Rouge with probably more than a third of those who lived through this era suffering from PTSD (post traumatic stress syndrome) where depression, insomnia, and passive behaviour are the norm. Even those born since that time are exhibiting similar behaviour since studies are showing that the symptoms are being passed down to the children. So, the smiles we see are born of a feeling of resignation in many cases which could erupt into anger. Fortunately, we have not witnessed this, but we are hearing reports of tourists having their bags snatched by motorcyclists, and the NGO workers will tell you about the many incidents of family violence.

In spite of all the monetary aid from donor countries around the world, the work of the numerous  Not For Profit Organizations, and the peace keeping measures of the United Nations, there is still much healing to be done. This will have to be done now by the Cambodians themselves. I am hopeful that this is happening judging by the people we have met such as, Siphon and Mach, Rota and Sitan, and our Canadian friends who work here.

2 thoughts on “Behind the Smiles”