It was Joseph Mussomeli, the American ambassador to Cambodia in 2005, who gave this warning to all visitors to the country:

“Be careful because Cambodia is the most dangerous place you will ever  visit. You will fall in love with it and eventually it will break your heart.”

Upon reading this, my mind flew back to four years ago when I met an American at the Atlanta Hotel in Bangkok who poured out his heart over his disenchantment with teaching in Cambodia. His problem wasn’t with the students whom he found to be respectful as all Cambodian students are to their teachers, but it was the corruption within the system from the top down to the teachers and even the students themselves. Every one seemed to be “on ‘the take” from the Education Minister who was a directly appointed by Hun Sen, the Prime Minister, to the department heads who accepted bribes in the way of new cars and big houses, the teachers who demanded money from their students to supplement their meagre incomes, and even the students who fought to find money to buy copies of their exams and in some cases their results. The losers in the system were the students whose parents couldn’t afford to pay the teachers’ demands, and the students who really learned nothing since most of their time was taken up with getting those good results. How can a country move ahead when its educational system is in such disarray?

This is a good example of how the country has been run since the days of Pol Pot and the Khmer Rouge. From the powers that be at the top, to the teachers and doctors and, yes, even some of the many NGO’s that have invaded this country, corruption lurks and is mostly responsible for the poverty that is seen throughout the country. I hesitate to blame it all on corruption or the big “C”  as there is the aftermath of the trauma left by the massacre of over two million people. Yet on second thought, perhaps even this would not have been so devastating if there had been more money put into mental health to give the population the necessary tools to deal with their demons. Instead,much of the money that has been allocated by the donor countries has unfortunately gone into the pockets of the government officials. The incredible fact of the matter is that natives and ex-pats, including some NGO’s, are all well aware of what has been going on, but most are reluctant to talk about it let alone do anything about it … until quite recently. From what I’ve read and can imagine from such a system that if you are honest and speak out against it, you might have your heart or some other part of your anatomy broken, but if you are a fearful sort, you will most probably close your eyes to it all. Unfortunately, the great majority of the people in this country have fallen into the latter category which isn’t surprising given Cambodia’s brutal recent history along with the ancient Khmer class system of king and slave.

The big C issue is not just peculiar to Cambodia, it hovers over most of SE Asia. Since December, we’ve been witnessing the protests occurring in Bangkok for the same cause as the protesters are fed up with the corruption they see in their present government. The same is happening in other places around the world – the Ukraine, India, and Pakistan to name a few. It is so easy for those in power to be corrupt and just as easy for us who aren’t to simply ignore it or pretend it doesn’t exist. However, I think many of us are willing to take the risk and say enough is enough, even in countries like Cambodia where there is the all too likely risk that you can be shot down by a motorbike whizzing by in the dark of night. The people there will tell you about at least one incident or more that they know of where this has happened.

After all I’ve learned through my reading and talking to native Cambodians and foreigners who work there, I do have some faint feeling of hope that the past and present way of doing things will change but ever so slowly. I have seen Siphon and Mach at the Meas Family Homestay trying to make a difference slowly but surely. They are strong believers in getting their community to keep the good part of their culture such as the weaving and the working of their land, but at the same time endeavouring to bring the changes which will matter to their community if they are to rise up and make life better for themselves. Doing what they want to do and not buying into the game of bribery, they are beginning to gain the respect of their community. Their after school program is a good example because here we saw an eager bunch of kids coming to their school voluntarily to learn, not just English, but a good example of how their lives could go if they choose. Then there is, Rotah and Sithan, the young couple running the Learning Centre at the garment factory on the outskirts of Phnom Penh, who worked diligently for ten years to get their NGO status the legitimate way and not the old way which is to hand over more money to get more quickly to the top of the list. They are very proud of what they are doing and trying to pass this on to their students.

Finally, there are the street protests by the garment workers that took place in January. Unfortunately, six were killed and over 100 were thrown into jail and still to be released. However, they are not giving up and are planning further protests. It remains to be seen how the government will deal with this in future. About a week or two before we arrived in Phnom Penh, the garbage collectors went on strike. They were actually given a small raise, just enough to keep them quiet, but they were not able to get medical compensation which is what they desperately need since they aren’t paid enough to pay for the bribes many of the doctors demand to compensate for their low salaries. In spite of all of this, it’s encouraging that Cambodians are beginning to stand up for themselves for the first time. It’s about time, but they will have to do it with small steps and low expectations when dealing with a government that says it’s concerned about the state of the country’s affairs but shows little action to prove it.

On our last day in Phnom Penh, my husband and I squeezed in one final thing to do which was a visit to L’Institute de Francaise for an art show that our journalist friend told us about over breakfast that morning. We are so thrilled that we took the time to go because here I saw another hopeful sign from not only the paintings hanging on the walls, but also the dancing that we were fortunate enough to see as some of the artists rehearsed for an upcoming show. Actually it was these paintings below that inspired me to do this piece on corruption or the big C as I prefer to call it. To me corruption is like cancer: it can ruin a country as it can ruin a person if we allow it, but with a little bit of  help and a change in our thinking it can be beaten. 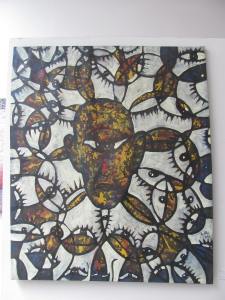 Heartfelt expression from a Cambodian dancer.