Except for the first time I visited Bangkok in 2008, on subsequent visits I never bothered to linger too long in this huge sprawling city. Maybe it was because of the jet lag which invariably comes with such a long flight over to this part of the world from my home in Nova Scotia. How do you deal with a teeming city of over eight million people where there are literally thousands of things to do and see when you are tired and your whole body is out of whack? Many visitors to Thailand have come to look upon Bangkok as merely a jumping off point to the more laid back areas, such as Chiang Mai in the north or one of the country’s beautiful beaches in the south.

This year I am travelling solo without “hubby” so I decided to renew my acquaintance with Bangkok by revisiting some of the places I saw eight years ago and to take in a few new sites.

My first significant change was to find another place to stay rather than the Atlanta Hotel on Sukhumvit Road which is primarily noted for its large, glitzy malls as well as its rather sleazy Nana area, one of Bangkok’s famous red light districts. This time I booked myself into the Uma Residence, a new boutique hotel in the Dusit area, which isn’t too far from the Chao Phraya River in the older and more residential part of the city.

If you happen to find yourself in Bangkok at any time, I would highly recommend the Uma as a great place to stay especially if you have a modest budget and want a decent bang for your buck. Taking advantage of their opening special (it opened in June), I received one night for free after a three night stay resulting in a nightly cost of $28. For the price of a budget hotel, I received accommodations that were the equivalent of a 4 star hotel. My room was tastefully decorated with pictures on the walls, which is a rarity in Thailand, and an extremely comfortable bed. They even provided me with a dressing gown, slippers, and a hair dryer. However, it was the outside of the hotel which I found the most inspiring. In the centre of the grounds was an inviting pool with more than enough lounge chairs, tables, and couches to relax in. To top this off, they provided us with cookies and all types of coffee or hot chocolate (from a machine) which was surprisingly good, for FREE! The Bangkok Post was available every day so I was able to catch up on all the latest Thai news since I left in March. Coffee table books were scattered here and there for additional reading. To make it even more like home, there was a cute Christmas display with Santa and all his reindeer. There are over 100 rooms at Uma but they were not all full so at times I felt like I had this place to myself. Another plus was that it is located off a busy street on a small soi ( lane) so it was exceptionally quiet compared to the Atlanta or any other hotel in Bangkok. Even the rooster who woke up early like all roosters do didn’t bother me as he simply added to the country atmosphere. As I revelled in my comfy sofa with a cappuccino and newspaper, I began to wonder if I really was in the city. 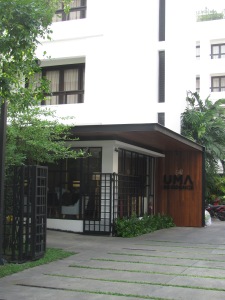 Entrance to the Uma Residence hotel.

The pool and gardens. 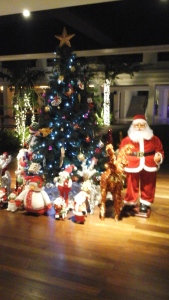 My one complaint about this hotel would be the distance to the nearest BTS Sky Train stop which as I found (because I did it) had to be more than 5 km. away leaving me only the option of using a taxi. To make matters worse, not all taxis would pick me up so I had to be somewhat aggressive in hailing one down. One of them refused to take me to my hotel because it was out of his way. However, the upside to this lack of transportation was that I was within walking distance to the Chao Phraya River, a large river that still functions as a part of Bangkok’s rather chaotic transportation system. Numerous boats of all shapes and sizes ply up and down the river all day and night providing visitors with an alternative to taxis, tuk tuks, the subway and the sky train. This is a great way to travel and see the sights in Bangkok. For the first time, I visited Chinatown and had fun finding my way around the maze of narrow streets and sampling some of their street food. I was told that the best time to see it and the river, too, is at night when every thing is lit up. 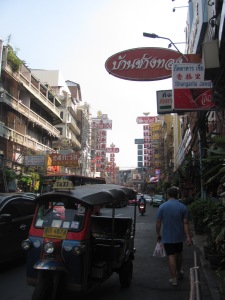 One of the ferries that transported me down the Chao Phraya River.

Another popular spot near my hotel is Khao San Road which was dubbed by a Thai writer as “a short road that has the longest dream in the world”. This street has been immortalized by the hoards of backpackers who have been coming to Thailand for the past 30 years looking for a cheap room and board, cheap and sometimes pirated goods of all kinds, and a thriving nightlife. Most stayed for only a few days before heading out, but unfortunately, there were those who were looking for that elusive dream that they couldn’t find back home, so got trapped by what Khaosan had to offer. Everything was for sale and it was cheap. It wasn’t unusual to see a few lost souls wandering the street at any time of the day with a beer bottle in hand as I did on my first visit several years ago. However, this time, there seemed to be a different vibe. Many of the old buildings have been renovated, and I didn’t spot anyone wandering aimlessly around with beer can. Even the quality of the copious amount of merchandise seemed to have improved along with the prices, of course! Khaosan appears to be undergoing some kind of change for the better. However, let’s hope it can keep some of its past which would be the reputation it has for providing people a place to be able to walk a short street crammed with so much to see and enjoy.

You can get a really good feel for the Thai way of life as it is today as well as it was in the past in this area called Dusit. Bangkok was built in the central part of Thailand along the Chao Phraya River in the 1700’s on a low-lying plain. An extensive system of canals was built for drainage to assist the agricultural activity of the area at that time resulting in its claim as “the Venice of the East”.  Over the years as the city began to spread outward in all directions, many of the canals were paved over to make roads for the increasing traffic. As an aside, Bangkok today has over 7 million cars for its population of just over 8 million! Needless to say it has a real problem with traffic which in spite of every mode of transportation possible, there is still no real solution. The one which no one wants to face would be to ban people from driving their cars forcing them to rely more on the transportation which is available even though it isn’t perfect. Perhaps it’s a good thing that some canals still remain and are used by the residents as an alternative to the horrendous traffic, and by the tourists as an opportunity for them get a taste of the traditional Thai lifestyle. Unfortunately, the canals or klongs are quite polluted and the disparity between the rich and poor living quarters can be a bit unsettling for some.

One of the remaining klongs.

Older homes of the not so wealthy.

Markets and street vendors galore are another familiar scene in many parts of Dusit. I was running into them everywhere I went. Fresh vegetables, fish, flowers, and all kinds of merchandise can be bought without ever having to set foot into a shop. Most business is done out in the open. Most of my meals came from various vendors near my hotel, and I didn’t get sick! In the past I’ve gotten sick from eating in restaurants but never from street food! It’s also cheaper to eat this way, and for a solo traveller this can solve the problem of eating alone in a restaurant. Some of the food vendors do provide tables and chairs but they are almost always occupied by locals because most Thai eat out rather than at home. 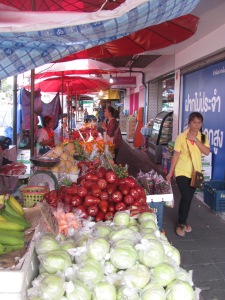 This lady sells her fish from baskets which she can take anywhere.

A flower stall near Payap pier where I got my ferry.

There were many more sites to see and things to do in my newly chosen area if I had planned for more time. The Grande Palace, the Wats Pho and Arun, the Vimanmek Mansion, the largest teak house in East Asia, and the Dusit zoo are just a few of them. Hopefully the Uma Residence will continue to offer their wonderful special for it is undoubtedly a little piece of heaven and the perfect place to chill out after a hectic day on the streets of Bangkok.

9 thoughts on “My Four Days in Bangkok”