Isn’t it human nature to want to have a day all to yourself where you have not one ‘must do’ to deal with – a day where you can do whatever you want to do? When I am home I often dream of doing this but somehow never get around to it. Even here in Chiang Mai so far away from my home and husband and the responsibilities that come with both, my mind is filled with a myriad of things to do calling for my attention. How is it that we get so programmed into always doing stuff we really don’t want to do resulting in never really fulfilling that dream?

About a week ago on a Sunday, I must confess to waking up feeling a bit lost and even panicky because I didn’t have anything pressing on my ‘to-do’ list. My thoughts went something like this: ” Should I just forget the list and do some sight-seeing? But I’ve seen all those things that tourists are supposed to see!” my mind protested . “Then perhaps I should spend the day reading all those books I never got around to reading at home, but where can I find a quiet place in Chiang Mai to read?” The one thing I was certain of was that I didn’t relish the thought of spending such a beautiful, sunny day in my room! After this brief mind torture, a flash of insight prevailed, and I realized that here was a golden opportunity knocking at my door – a whole day at my disposal to do whatever my heart wished and wherever my feet led me.

I hastily put myself together and flew out the door ready to face the day. At this point, I didn’t have a clue what I would do with this gift of a day just for me, but the one thing I was sure of was that I needed a substantial breakfast. Breakfast up to this point had been juice, yogurt, cereal, and rye bread in my room.

Right away I decided to seek out the restaurant (Good Morning Chiang Mai Coffee) where I breakfasted last year on a Sunday. Back then it inspired me to write a post titled “Sundays in Chiang Mai”. Although their service this time was slow and disorganized because of its popularity with both the back pack and ex-pat crowd and staff that aren’t equipped to handle them, the quality of the food is still there. My appetite was eventually sated by a large french toast with butter and syrup, fruit, and good coffee. By the time I was finished, it was almost noon and beginning to warm up. I left and found my feet taking me to the south gate to take a look around there.  I was impressed at how lovely the fountains in the moat looked. It was at this point I realized what I was going to do with the remainder of my day. I would walk all the way around the moat! This would be long trek but it wasn’t a hot day, so I knew if I was ever to do it then this would be the best time.

I should digress here and give you an idea of how this city is laid out and why the moat that encases the inner city is such an essential part of old and modern day Chiang Mai. This city of now over a million and a half people is composed of the old part or inner city and the newer outlying part spreading in all directions. The inner city where I usually stay and where most tourists congregate is surrounded by a moat and some of the remains of a defensive wall over 700 years old. I read that the moat is about two kilometers all the way around but to me it felt like many more. Here is a map of the inner city. 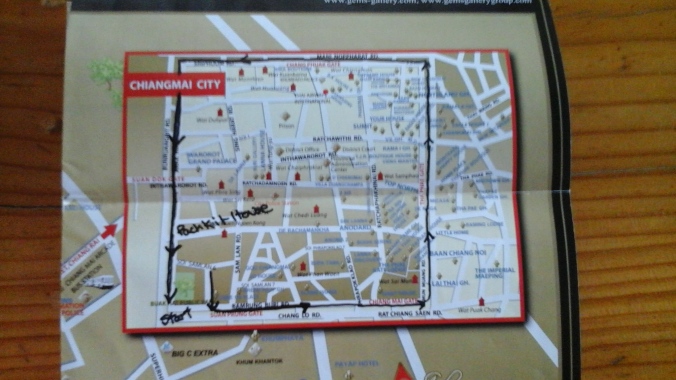 A map of the inner city and my route from start to finish.

In 1296 when the wall and moat were built to keep out the Burmese and Chinese who were the Lanna Kingdom’s greatest enemies, this was an ideal set up to keep the citizens safe. I am not so sure how practical having this moat is today for the traffic in this city. The streets running along both sides of the moat accommodate one-way traffic with turnoffs allowing the traffic to get to the other side. However, the drivers often have to do considerable backtracking to get to their destinations. Since there are no traffic lights, the traffic is always continuous and fast making it hazardous for pedestrians trying to get to the other side. Nonetheless, no one can deny that this moat is what makes Chiang Mai unique. The ‘powers that be’ who run this city know this so maintenance is a top priority. The numerous fountains are nearly always doing a wonderful job of spouting up a lovely spray of water thanks to the pumping stations which seem to be well maintained. Every day the work force can be seen scooping out any debris that accumulates both in and out of the moat. Their efforts do not go unnoticed, especially by visitors like me, and I suspect by most of the locals as it has served them well not only in the past but today as an added tourist attraction.

If you wish to follow me further on my walk around the moat and inner city to get a bird’s eye view of Chiang Mai, then simply click on the first image below. Enjoy your tour! 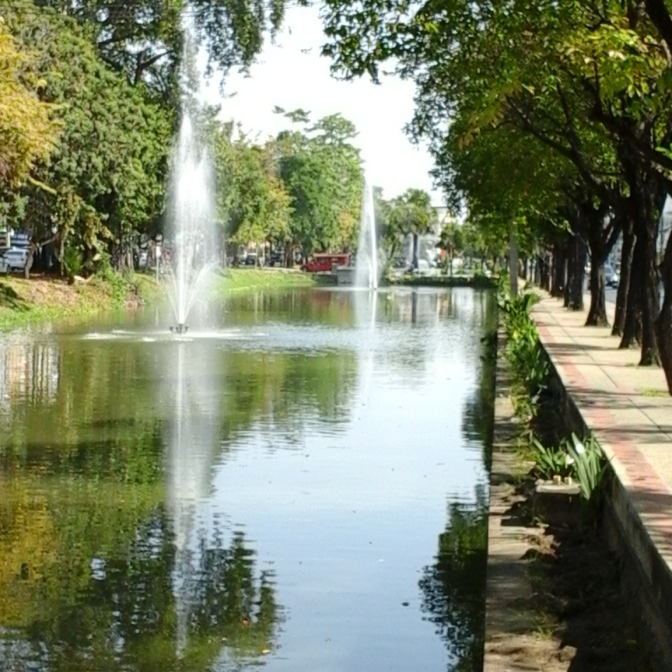 Start of my walk at south gate. 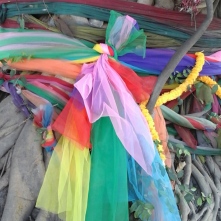 A tress all dressed up on the south side. 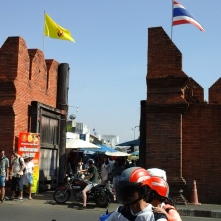 Busy ThaPhae Gate on the east side.

A market at ThaPhae Gate.

Busy street scene along the east side of the moat.

Part of the moat on the east side. 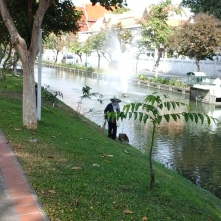 One of many moat cleaners.

One of Chiang Mai’s many wats.

A walking bridge on the east side.

Remaining old wall at the northeast side. 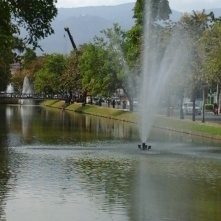 First view of the mountains on the north side. 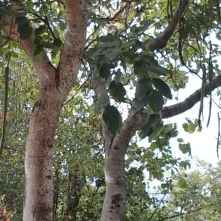 What is this unusual looking tree?

A worker taking a rest. 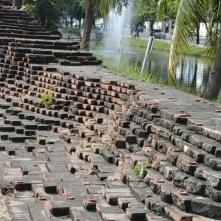 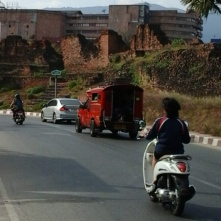 Rounding the turn at the northwest corner.

Wall on the northwest corner.

More fountains on the west side.

First and only time I’ve seen this in CM.

Continuing along the west side. 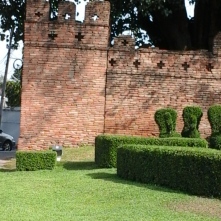 Part of the wall at the west gate. 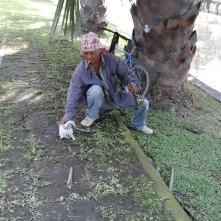 Catching fish from the moat.

Lovely Rim Hotel near my place facing the moat. 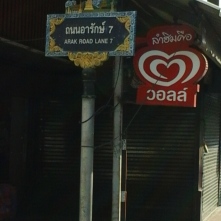 Almost at the end – Soi to my guesthouse.

My guesthouse. Should I stop now?

The last part of my walk to the southwest wall. 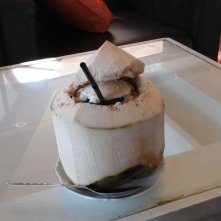 My reward for completing the walk around the entire moat!

8 thoughts on “A Precious Gift”