“This is the wrong form. I can’t accept this,” says the guy at the boarding gate desk at Pearson Airport in Toronto, after scrutinizing the reciprocity visa form I had just passed to him. I think the first thing that popped into my mind was why the heck didn’t I heed the little voice inside which said to me when I was applying for this visa to Argentina, “Is this all there is?” Somewhere in the process of filling out my information I thought I recalled that there was the word ‘forms’ and not the singular, but I could only find the one I had in my hand so this had to be it. At the time, I did think this rather odd but didn’t dwell on it as more pressing issues took over.

That’s all he says to me. “What should I do,” I asked after we stand there momentarily looking at each other. “I am not going to miss my flight to Buenos Aires because I haven’t the right form. It says right there that I’ve paid for it. Won’t that do?”

“We need the authorization number so go over to the Customer Service desk to get the proper form printed off,” he replies. “If you hurry, you can make it.” By now I am beginning to feel the first pangs of panic and my voice probably reflected that as I realized I hadn’t a clue where that desk was or how to find that missing form even if I did know where it was. He tells me that if I take a short cut through the Duty Free shop and hurry that I can probably make it back in time for my flight. Probably! He doesn’t seem too concerned so I think perhaps this has happened to others. In fact while I was waiting at the gate in good time to board my plane, many reminders were given to us, the passengers, that this reciprocity visa was required. Obviously many of them weren’t even aware of this so I felt pretty smug that at least I had mine. Little did I know!

I start to run through the throng of people still waiting to board, telling myself to stay calm and that this will turn out all right. The plane just can’t go without me. I see the desk not too far away but also see that all three reps are busy with customers. I presume they are the unfortunate ones who have missed their connections due to the icy weather conditions in Toronto which had already delayed my flight from Ottawa by two hours. They don’t seem to be in as much of a panic as I am so I bravely announce that I need help right away with printing out my visa form for my flight which is just about to take off for BA. One of the girls picks up on the urgency of my situation long enough to tell me to grab the nearest computer, go into my account and bring up the form. By now my mind is drawing a big blank. What account? After a deep breath, some common sense finally clicks in. I try to get into my g-mail account but the computer isn’t co-operating. I ask the girl for help but she replies that she isn’t very computer savvy. Excuse me but am I hearing her correctly? Finally, a young fellow appears who is obviously aware of my panic and inability to function properly so steps in to help. He manages to calm me down and together we find the account which by then I remember setting up to get the form(s). Behold, there is the elusive second form which I had missed when I applied several days ago. It was way down the page and hardly visible as far as I could tell. No wonder I missed it! He quickly ran it off and after a hasty heartfelt ‘thank you’ (if I had the time I would have given him a hug) I ran for my gate via the Duty Free. By now I’m convinced that more than a few minutes have passed and that the plane has probably taken off. Then I hear my name being called and realize they’re waiting for me! The Duty Free staff are now aware of what’s going on so all come to my rescue pointing me in the right direction to my gate. God bless them all! The area is totally deserted as I approach. All the passengers are on board. I race down the ramp. Please don’t close those doors I silently pray. Instead the crew greet me as though all is normal and calmly direct me to my seat. Such an overwhelming feeling of relief washes over me. I quickly give thanks to all seen and unseen beings who have helped to finally get me on my way.

The rest of my flight was totally stress free. They fed me lots of food, I watched a couple of movies, and even got some much-needed sleep. The next morning I woke up to the captain announcing that those of us on the left side of the aircraft should raise the blinds and take a peek at the view of the Andes below us. We were making a quick stop in Santiago, Chili, and there below us were miles and miles of brown mountains iced with a smattering of snow on its chain of peaks. What a wonderful introduction to South America!

As I write this, I am exactly into the fourth day of my visit to Buenos Aires. In some sense, I feel as though I am in another world way down below but as I get more settled this sophisticated city seems no different from any other European city especially Paris. I understand now why it’s called ‘the Paris of South America’. I should also mention that not only does it look like Paris but it’s almost as expensive.

Here are some things I have noted so far and wish to pass on for anyone who may be thinking of visiting this city:

Probably the best part of my days here so far is waking up each day to the sun. Was it less than a week ago I was slogging around in the ice and snow in Ottawa? My first day here was overcast at about 28 degrees but the last three have been sunny with clear blue skies and temperatures hovering at 30 to 32 degrees. Yes, it’s hot but not unbearably so as there is little humidity and some soft breezes. Today I stayed close to Casa Aire Palermo where I am staying to give my aching feet a rest. This bed and breakfast is owned and run by a young couple with an adorable one year old son who smiles all the time. It’s an older home with about five rooms which they let out and comes with a common kitchen and living area for the guests’ use. To keep within my budget I have been limiting my meals out and taking advantage of their kitchen. Immediately outside my room I have access to a small garden where I can sit at any time of the day. You can find this great place on booking.com my favourite site for locating great places to stay around the world. They have never let me down.

As I look back over this week, I am still coming to grips with how it could have taken a turn for the worse when I was beginning my journey at the airport in Toronto. I would have liked to have handled the situation without losing my cool and almost having a panic attack, but luckily for me it was the beginning of a trip which so far has exceeded any expectations I might have had. I am just so thankful to be here learning about a new culture, meeting up with old friends from Dubuque, Iowa whom I met seven years ago in Bangkok, and enjoying the warmth of the sun. Life is indeed good!

A few pictures taken on my Walking Tour of Buenos Aires 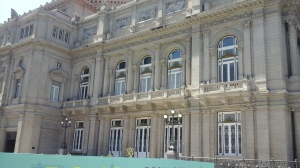 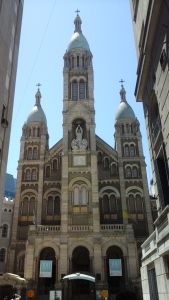 The most beautiful Catholic church in BA 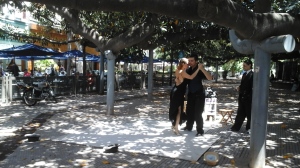 A tango in the park. 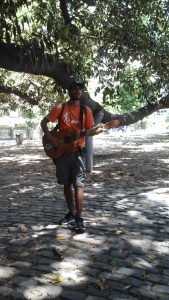 Our tour guide displaying his skills at guitar playing and singing.