I love Sundays. There has always been something special about them. In fact, I wrote a post about a year ago titled “ A Precious Gift” about spending a memorable Sunday in Chiang Mai, Thailand. Sundays have no special religious connotation for me but I do find them inspirational. For example, I have noticed it is often on a Sunday that I get inspired to write another blog post.

I woke up today realizing this is my last day in this beautiful city called Cuenca. What was I to do with it after I finished Skyping my daughter and my travelling friend, Cathy? Some of the guests here where I’m staying were taking an excursion out to visit some nearby villages for their Sunday markets, but that didn’t hold much appeal for me. There were other things I could have made an effort to see, such as the El Cajos National Park but that didn’t ring my chimes either. What I opted for was to set out to explore all my favourite places right here within walking distance from my hostel.

Tourists and locals who want to explore or who simply want to stroll will invariably head for the pulse of this city: the Plaza del Calderon.

As I approached it, I could hear authentic Andean music or folklorical as I’ve seen it referred to. This was exciting because I have been wanting to hear more of this music but somehow the opportunity had just not presented itself. There it was, finally, at the Nuevo Catedral! Three men dressed in native costume were making music that literally sent chills through me. 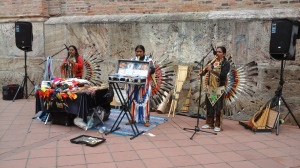 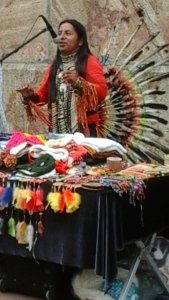 At last I had found what I was looking for and to sweeten the pot even more they were selling CD’s. Without hesitating I bought one on the spot for only $5.00!

Feeling quite elated, I decided to head down to Calle Larga the street following the Tomebamba River one of four rivers snaking through Cuenca. The streets here are laid out in a kind of grid pattern in spite of the rivers, mainly because the heart of the city is nestled between the Andes that run parallel on either side of it. The Tomebamba River, which is the nearest to the centre, flows from west to east so all the north south streets lead to it.

I find myself on a street I have not walked on before. At first it appears to be rather nondescript with houses, shops, and a few eating places on either side. Suddenly a shop with colourful textiles and a few people milling around catch my eye so I  decide to check it out. I find the kind of llama sweater I bought for myself a few weeks ago which I mentioned in my latest post. If I can get several of those at my price of $10 I decide I will buy them. I am in a shopping mood after buying that CD. He starts at $28 and finally comes down to $15 but I can’t accept that even though they are thicker and of a slightly better quality. I know I am fighting a loosing battle. Not wanting to leave empty-handed, I spy some bags which might sell if again I get the right price. Starting at $15 he eventually lowers to $8 so I buy two of the three he has in stock. Buying in Ecuador takes much effort so I’ve had to walk away from many of the things I see and like because of our crummy Canadian dollar!

Purely by accident or maybe it was fate, but the next street I take leads me straight to Cafe Goza, the most popular spot in Cuenca for their many specialty coffees all grown in Ecuador. It’s popular with locals and ex-pats alike and is always busy: so busy in fact that it has a security guard standing outside where everyone sits. I’m not sure why this is so, but I’m assuming there must have been a nasty incident there at one time. It’s odd because I haven’t seen much evidence of police in the rest of the city. Better to be safe than sorry I guess when it comes to the safety of the ex-pats. Apparently there are well over 5,000 living here. 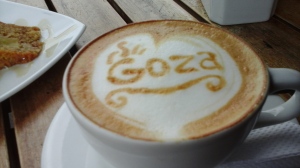 Sated with a cappuccino and some apple cake, I continue my walk, snapping pictures of the old colonial homes, the bridges spanning the river, and stairs leading down to it. 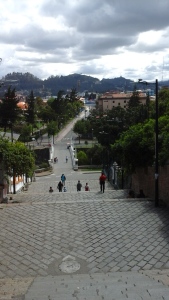 By this time the sun has come out from behind the clouds to pour its warmth on me. Sitting there beside the quick-flowing river, I take the time to appreciate this environment for possibly the last time and to realize how fortunate I am to be here in this wonderful place. I love people watching and this was the perfect place to do it. Families playing games or splashing in the water, older folks out for a walk with their dogs, young lovers smooching under a tree, and old indigenous women looking for recyclables to cash in for extra money. It was all there; the good and not so good. 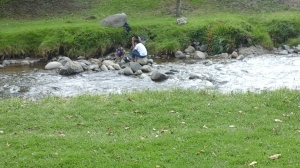 It is time to move on again so I continue west which will lead me back to the centre. I am looking for Avenida Benigno Malo which has become one of my favourite streets. I discovered it for the first time yesterday and after seeing many restaurants offering daily luncheon specials I noted this and remembered to return. I know I might be disappointed because it is Sunday when many restaurants and shops are closed. However, as luck would have it, I find one which is offering soup, BBQ chicken, dessert and juice for the paltry sum of $4.00. I had taken advantage of a similar lunch special or almeurzo two days ago on another street. Such specials can be found in the better class restaurants on some of the smaller streets where foot traffic is lighter. Their portions are substantial and they are usually good. Tourists like me on a budget love them! 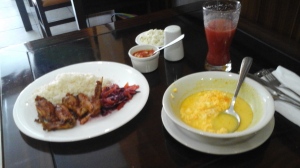 Benigno Malo has a fine showing of the old Spanish colonial architecture which contributed to naming Cuenca a Heritage site some time ago. That’s another reason for choosing to walk this street and not the others. It’s a photographer’s delight. Right in the centre it runs smack dab into the famous Nuevo Catedral or Church of the Immaculate Conception which is another photographer’s gem. Snap, snap! I must have taken over 100 pictures today! 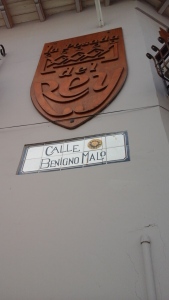 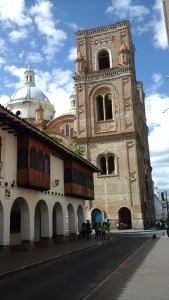 Over four hours have passed since I stepped out onto the street at my hostel. Now I am back in my little room with a full stomach and at peace with this city which I hope I will get the chance to revisit. Once again, it’s time to pack up my bags for tomorrow’s early morning departure and long haul bus ride to Quito, my next stop. This will be another revisit to seek out the places I missed or maybe just to explore those already seen in greater depth with a more seasoned eye. Time will tell.

14 thoughts on “A Walk About Cuenca”