With the abysmal performance of our Canadian dollar, you have to wonder why I am literally running into Canadians every other day while I have been travelling around Ecuador. A few weeks ago on my first visit to Cuenca all the guests, except for one young female from England, were from Canada. We had a solo woman traveller from Alberta, a couple from Saskatchewan, another couple from Manitoba, a couple from Ontario, and Cathy and me from Nova Scotia. Previous to our arrival, our hostess announced that she had just had a couple from Montreal stay with her. Bonding very quickly over the horrible weather the folks back home were experiencing, it became an old home week for us all. It’s probably a good thing there was no one from the US as I’m sure they would have felt outnumbered.

I’m not exactly sure for the reasons for this influx of Canadians this year, but I can guess at some of them because they’re probably similar to my reasons for being here.

For years I’ve been hearing how inexpensive it is to live here or to visit for that matter. That still seems to be true, although it’s not surprising that costs are creeping up here as they seem to be world-wide. Even though our dollar is not performing very well right now, Ecuador is still affordable. As a result, Canadians are trading in Florida and Arizona for their winter escapes and looking at Ecuador as their next possibility.

For ex-pats or would be ex-pats it’s the perfect place to come to. The present government, under Rafael Correa, has done much to make it easy for people from all over North America and some from Europe to make this their home. They are finding that their retirement fund goes a lot further here. In fact, many of them can honestly tell you they are living in the lap of luxury compared to how they would be living back home. Depending on where they choose to live and how, a couple can live quite comfortably on $1200 or more a month.

I must point out that not all ex-pats are retirees. There are many young people, some with children, opting to make Ecuador their home. The younger ex-pats want a simpler life and definitely don’t want to take part in the ‘rat race’. The want a cleaner and safer environment so have chosen to buy land here and try their hand at farming. I saw that in Vilcabamba and Cotaccachi, both small towns where things grow like crazy all year round. Some retirees have set up their own businesses such as restaurants, food companies or whatever their interest happens to be. There are many opportunities here for anything in the exporting field since the country is rich in resources.

The present government has encouraged ex-pats to come here by making it easy for them to buy property, set up a business, get access to good but inexpensive health care, and by providing seniors’ discounts on transportation, museums, and concerts, some of which are free.

It’s not surprising that the weather plays a big part in why people are choosing to live here. Wouldn’t you be lured by what can almost be described as living year round with ‘eternal spring’!The whole country has the equator running through it so was aptly named from the Spanish word meaning equator. You might think that this would mean the country would be terribly hot but not so. It can be very humid down on the Pacific coast at sea level, but the rest of the country can legitimately claim to have an ideal climate where it’s not too hot or too cold. Temperatures can vary somewhat with it being a bit cooler in the north and warmer in the south, but always a moderate climate is enjoyed if you live in the middle which is higher up in the Andes. In fact, if you climb up to the top of any of the numerous volcanoes here, you will need to dress very warmly as temperatures can go down to the single digits. From January to May is the rainy season which isn’t always the best time to visit if you are a sun-seeker. The weather can be extremely changeable with sun, cloud, and some rain all in one day. Let’s just say I would hate to be a weather forecaster in this country! In spite of this weather uncertainty, there is always the consolation that there is never any snow to shovel.

There is nothing boring about this country. For beautiful scenery, it is fantastic. It has mountains and volcanoes galore, lush green valleys, tropical forests, cloud forests, numerous rivers with grandiose falls, and gorgeous beaches. It’s an adventurer’s paradise. It’s biodiversity is apparent with more than 25,000 plant species and 1,600 types of birds, more than any other country in the Western hemisphere. The numerous tribes of indigenous people along with the Spanish and mestizos provide a colourful and vibrant culture. For visitors and ex-pats alike, there is much to see and do for such a small country.

I might add that the country is still relatively healthy environmentally although signs of pollution from the poorly maintained buses isn’t helping the atmosphere especially in the cities. I am sure there are other atrocities going on as we might suspect in the Amazon region with the discovery of oil there in the 1960’s, and the government’s seemingly lack of will to stem the exploration despite the protests from the indigenous tribes who live there. There is a movement afoot which is gaining momentum to allow them to limit the rampant growth so they can live sustainably. Sounds to me like Ecuador is facing the same problem here as we do in Canada with our Tar Sands. The money reaped by their oil discovery has just been too lucrative for the country’s coffers to seriously do anything about it.

Generally speaking Ecuadorians are friendly people who are genuine in their response to all the new comers arriving in their county. This does, of course, make it much easier for ex-pats to set up a new life here. The welcome mat is obviously out for them. Some are more successful than others at integrating into the local culture. The one place which has a large number of gringos (the polite word used by the Ecuadorians to describe anyone, not just Americans, who move here) in proportion to the population which is about 4,000 is the town of Cotaccachi not far from Otavalo. The day Cathy and I decided to visit, I was amazed at how the ex-pats or gringos seemed to not only take over the market but were also forming groups in many of the restaurants. It appeared obvious that they had unwittingly taken over certain restaurants, thus, claiming their turf. We felt entirely ignored so I can imagine any local would feel the same way. My sensation of this was later backed up by Miryam, my hostess for the AirBnB where I have been staying. She claims there is a tension between the locals and the ex-pats. It’s unfortunate this has happened in  Cotaccachi as I personally think that Ecuadorians are extremely friendly and helpful and in most cases go out of their way to make any visitor to their country feel welcome. Of course, there are bound to be those who want to take advantage of us with their petty thievery, but this isn’t surprising since there are many who are still poor and lacking in education. Nevertheless, this country has come a long way in improving its social services since Correa has been in power but still has some distance to go in narrowing the existing disparity between the rich and poor.

Probably the most important question to be answered for me or anyone who thinks that Ecuador might be a good place to live is to talk to the ex-pats and get their responses. I found that the ones who were most positive were those living in Cuenca and Vilcabamba. The most exuberant person was a lady I met at the Central Plaza in Cuenca who moved there from Ottawa four months ago with her husband. Here was a couple in their early 50’s who sold their home and most of their possessions to live in Cuenca. They were not looking back and loving their new life for all the reasons I have suggested. Their one big challenge was to learn the Spanish language.This I have to agree has been a real hindrance for me in getting to know the people and the country better. The Americans are further ahead of us in this as most of them have had experience at speaking Spanish in their own country. Then there was the couple from Toronto in their 80’s. I met them while having lunch one day in a fancy restaurant offering a terrific luncheon special. They were visiting Cuenca to check it out places to rent. Once they found a place, they were going to make the big move. The wife was regaining her youth again so much so that she was actually taking up sky diving and loving it. She also added that her husband had lost 20 pounds in the two months they had been there from all the walking they had been doing. Amazing! I hope I can be like them in my 80’s!

There is much more I could write about this country. I hope that my impressions of why Ecuador is gaining a good reputation as a place to move or retire to if you are looking for a lifestyle that will be easier and more affordable are sufficient to whet your appetite just a wee bit. Or better still, why not consider it as a country just to visit? There really is much more here than the Galapagos! 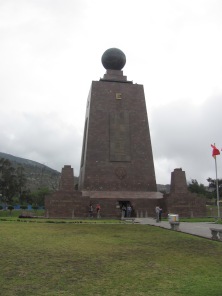 Monument at Midi del Mundo to mark the equator. 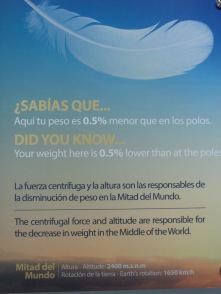 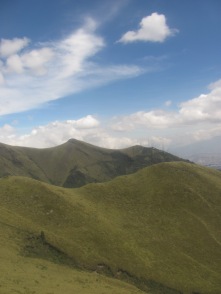 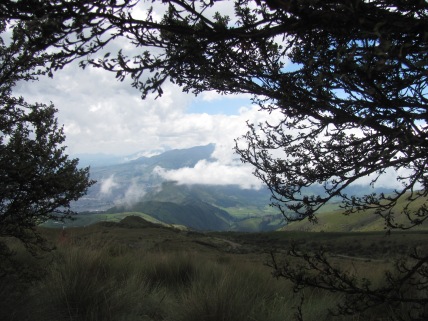 Another view from Pichincha 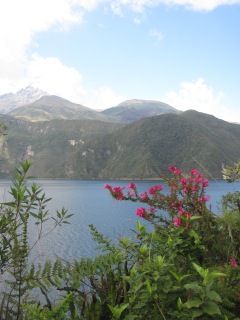 Lake or laguna near Cotacatchi. 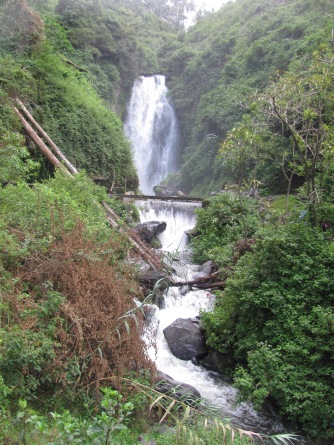 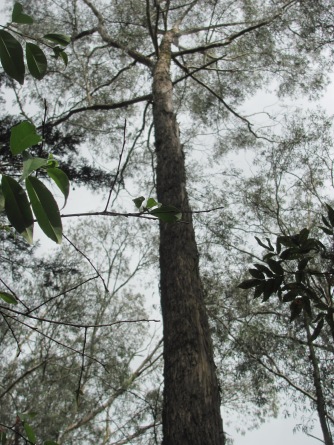 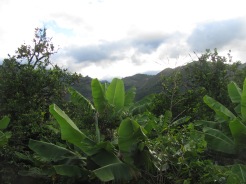 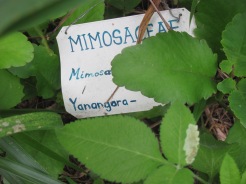 One of many plant species in Rumi Wilko Park in Vilcabamba 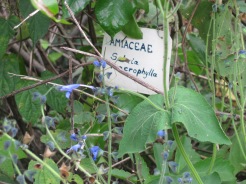 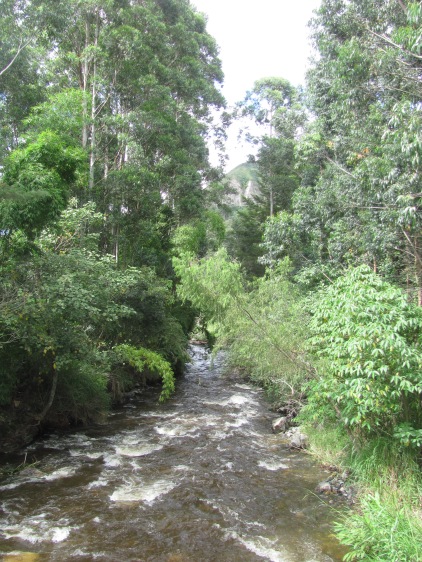 The trail I took in Rumi Wilko Park 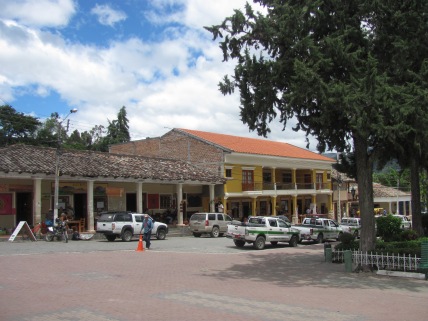 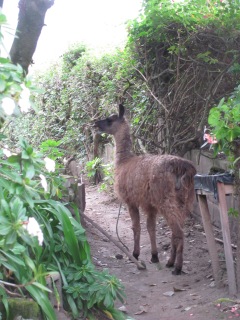 My unexpected guest in my garden in Otavalo 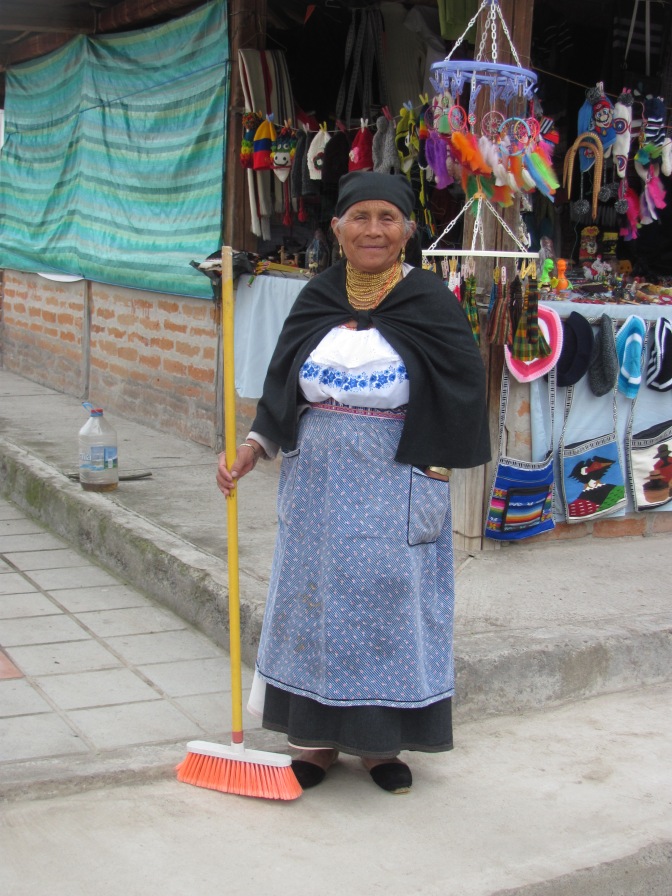