“When time which steals our years away

Shall steal our pleasures, too,

The mem’ry of the past will stay

And half our joys renew.”

This is a quotation by Thomas Moore, a 19th century poet and song writer from Ireland. I recently found it in my Mount Allison year book from 1966 along with my graduation picture. I have no idea why I chose this particular quote by this poet to sum up my years as an under graduate of the Arts at Mt. A as I was about to embark upon the world that awaited me. I only recall that I made the decision to use this in haste, after desperately combing through a book of quotations none of which seemed quite appropriate to express my particular feelings on such a momentous event. This would have to do, I thought.  Would I choose it today? Very likely not, as much water has passed under the bridge since that day bringing much change and growth. Thank goodness! Then, on second thought maybe I would! Let me explain.

After a whirlwind trip to celebrate my 50th reunion in Sackville, N.B. where Mt. A is located, I dug out my year book and found those long-forgotten words. I have to admit I was quite baffled by my choice and was struggling to even remember anything about Thomas Moore. The only Thomas Moore I could relate to was our modern-day American psychotherapist and writer of books about the soul – Care of the Soul and Soul Mates.

After reading about the Irish Thomas Moore, the pieces of the puzzle as to why I probably made this choice became clearer. After all, don’t the choices we make in life reflect that stage in life we find ourselves, and don’t they yield terrific insight into our character and what makes us tick? Perhaps I had not made such a ridiculous choice after all?

Here is what I found about Thomas Moore the author of my quotation. First of all he was not only a poet, but also a singer, song writer, entertainer, and biographer. In fact, he was often referred to as the Irish bard just as Robbie Burns was called the Scottish bard. He was a man of the people. He was happily married to an actress with whom he had five children. Unfortunately, all of them died before he did which distressed him deeply. That, along with financial problems at various times in his life, were his main crosses to bear. He became good friends with Lord Byron supporting his belief that Greece should be an independent state. He also supported the emancipation of the Irish from the Catholic Church and strongly disagreed with Thomas Jefferson, the President of the US, for his support of slavery. He was a man who cared for people and wasn’t afraid to speak out against the wrong doings of his time. He was a very personable man genuinely liked by most people who knew him. The words used to describe him were honest, affectionate, independent, and high-minded. Wow! I would like to meet such a man today.

After learning all this, I realised I hadn’t made such a ridiculous choice after all. This quotation wasn’t just a trivial bit of nostalgia as I first thought. It goes much deeper and is certainly appropriate not just for a graduation but also for a reunion 50 years down the road. Yes, reunions can stir up many memories, some good and some bad. I guess this is why some people find it difficult attending them as they remember only the bad stuff. I have learned it’s best to let the bad go and remember only the good which as Moore says is about half – if we are lucky! Can we really ask for more, I wonder? So at this reunion choosing only to remember the good stuff, I found myself delighting in reconnecting with old friends and even old boyfriends who may have caused so much grief back then. This time around, I even got better acquainted with those I never got to know when I was there, so I made new friends as well. I actually felt like I was part of a big family where we had all come together from hither and yon to celebrate a milestone in our varied lives. We had made it to our 50th for which we received pins in honour of our doing so. It really was something to celebrate rather than something to avoid. Over the years I did attend a few not so memorable reunions. However, this one was totally different for me and will go down as not only memorable but fun. Upon reflection I realise that a satisfactory outcome to attending school/college reunions is all about how we approach them which is reflective of the changes we have undergone in our life’s journey.

One further thought I have on the subject of attending reunions especially the 50th and those beyond is that they can also be a kind of wake up call for us. The reality is that we are all getting older and do we really know what amount of time we have left? As we were all winding up our weekend, I heard this sentiment from some as we said our ‘good byes’ and wished each other well until our next one in five years time. It’s true that some of us might not make the next one. Somehow I suspect that many of us will. I sure hope so! I was particularly inspired by the class of ’46 who were enthusiastically represented by four gentlemen well into their 90’s who gave a rousing tribute to their class. They were the stars of the whole show. They were living proof that we really can get better with age just like the proverbial red wine. My wish is that there will be some of us from the class of ’66 who will be as feisty as those four men from the class of ’46 when our turn comes round in twenty years. Wouldn’t that be something!

Point your cursor on each of the images to see the captions below.

Meeting up with old friends – Sheila MacKinnon, Hughena Matheson, Ellen Davis, and me.

Getting a ride to our pin ceremony. 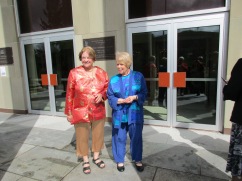 Mt.A’s pond and focal point of the campus. 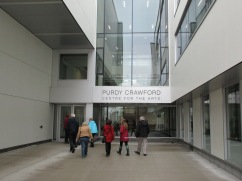 4 thoughts on “Celebrating My 50th Reunion”