Am I not bored with visiting Chiang Mai in Thailand, you might ask? After all, this is my ninth visit to this exotic and oftentimes chaotic country, but my answer is still a resounding “No”. For me it’s not about how much I can see or do here; it’s more about what I can absorb and learn from it. Admittedly coming to Thailand is a bit like coming home for me. It’s comfortable and nurturing. Sometimes I wonder if it’s not becoming too comfortable. Perhaps I should stretch myself and travel to new places before it becomes impossible to do that? 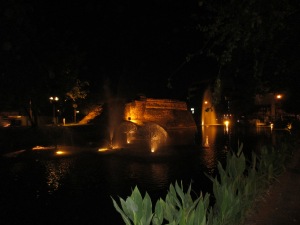 However, for now it’s enough for me to just be in the warmth of its beautiful sunshine. But hang on …all is not perfect! Chiang Mai’s air quality has worsened over the years… more vehicles and no decent transportation system all while the population continues to grow with huge numbers of tourists and new people moving in making this city less desirable for many of us. Furthermore, the slash and burn carried out by the northern rice farmers adds more fuel to the fire. Even though the local governor has stated all those who break a 60 day moratorium, beginning in February, will be fined, it’s only caused more problems as it’s now rumoured that they are outwitting the ‘powers that be’ by burning before the moratorium goes into effect. I have been here two weeks and already my sinuses are taking a beating.

So you might ask why I keep coming back to Chiang Mai to put myself through this torture? Well, it’s mainly because of the fabulous markets which I need to shop for my importing business and to meet up with old friends. I manage to immerse myself quickly into the worsening traffic, the bad sidewalks, the dirt and the noise, and accept all that makes this city an exciting place to visit. It continues to draw people of all ages from all parts of the world. It boasts of having one of the largest ex-pat communities in the world. It offers something for everyone in the realm of culture, food, night entertainment, and adventurous activities. If you want to escape the noise of the city you can retreat to a wat for meditation, a nearby provincial park for some bird watching and a walk in the woods, or stay at an elephant farm to commune with these beautiful beasts in their natural habitat. 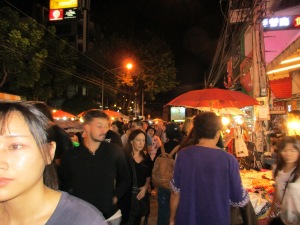 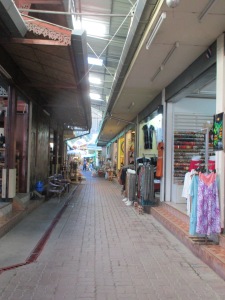 The market in Baan Tawae outside Chiang Mai.

This year I chose to rent an apartment outside the centre or inner city away from the ‘madding crowds’. My new location near the airport is near enough to the action that I can grab a songthaw and be there in twenty minutes or less depending upon the traffic. Last week the temperatures were brought down with some much-needed rain, so I found myself walking to the Chiang Mai Gate, one of five gates leading to the centre of the inner city, since songthaws aren’t always readily available. Another reasonable alternative cropped up when I discovered a free shuttle service for tourists at the nearby Central Airport Plaza which will take me to the centre and back out if I can fit my schedule into theirs and not count on the last trip back at 7:15 pm which may or may not show up. Oh well,  available songthaws and reliable free shuttles aside, this is Thailand so I’m not complaining. One has to accept that things here happen on Thai time not our western time. 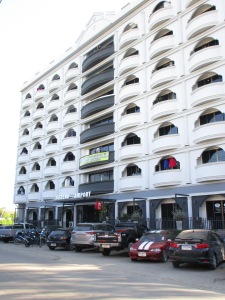 My apartment is in this condo-the Sereno Airport. 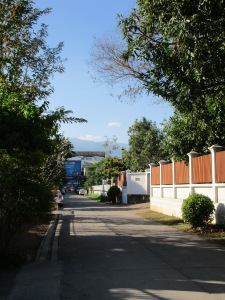 A nearby side street.

So far I’ve not only been meeting up with some old friends but also meeting some new ones….mainly Thai who speak good English. This is definitely a bonus as I can get a better idea of what is presently going on in their country and how they feel about it. The Thai have always had to be extremely careful of what they say about their Royal family…especially the King… but now it seems they have to be careful of what they say about their present Prime Minister who is the leader of the military backed government. 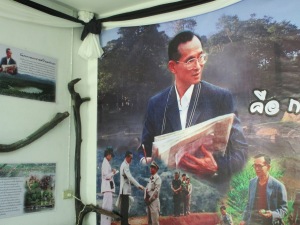 Yes, I can read the Bangkok Post which gives its readers the impression that Thailand has settled down and getting back to business as usual following the military coup two years ago and the loss of their beloved King last year. Now the only son who carries a storied and eccentric past that many Thai question is going to take his place, and they wonder if he’s capable of filling the big shoes left behind by his father. I can also listen to the present Prime Minister’s Friday night speeches where the “lovely, smiling” Thai people are told they need to pitch in to help him bring the country together. In other words, they need to obey the laws of his government and work together if they are to better their quality of living, overcome corruption, and continue to be the leader of the pack in the Southeast Asian countries. All well and good. However, the quality of life doesn’t appear to be improving and economically the country is reported to be losing ground to the huge economic growth taking place in Viet Nam. Furthermore, the whole country is beginning to feel the effects of climate change. At present, the south is being hit hard with massive flooding while in the north the farmer’s are begging for rain as they see their rice crops drying up. The question is…can a military dictator who is reported to be paranoid about what the press will say about him and his government, and an eccentric prince with such a questionable past be able to steer Thailand in the direction it needs to go?

Thailand has had too many coups and Prime Ministers to count over the years since the Royal dynasty granted the country a constitution which brought into existence the role of the Prime Minister, a House of Representatives, and a parliament. Since then they have struggled to achieve a democratic form of government, but all efforts have been short-lived only to be replaced with military dictatorships. Fortunately, these numerous coups have all been carried out peacefully which says much about the Thai character. Most will tell you that it was the former King who was instrumental in pulling that off. Now that he is gone, what will happen next? So far so good. Many Thai are in mourning and will be until a year from his death which will be some time in October of this year. The present government has successfully orchestrated a peaceful transition and is promising to have a democratic election in 2018, but the people are wary and don’t seem to be too hopeful…at least those I have spoken to. 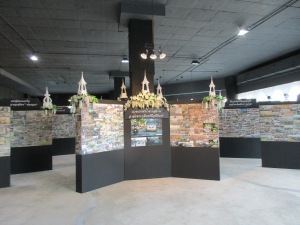 A massive display depicting the King’s life and death. 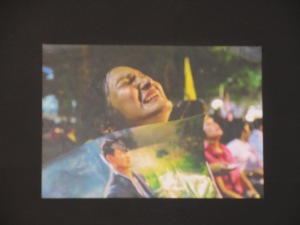 Thai grief after his death.

The government claims that tourism is up over last year, but the vendors I deal with report their sales are down. They are worried about their decreasing sales and increasing rents which are putting some of them out of business. Small coffee shops and restaurants are either closing or relocating to the outer regions because of the rising rents. Large, more modern buildings and more cranes are evident in the inner city giving it a distinct cosmopolitan flare. With all of this happening, it’s definitely time the city got its long proposed transit system in place. The money is there or so says the government, but the council still has to get the songthaw operators on board. Who knew they held such power, but they do. In the meantime, they don’t seem to care about the fumes they are spilling into the already dirty air. 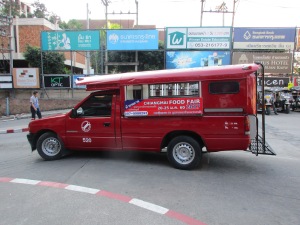 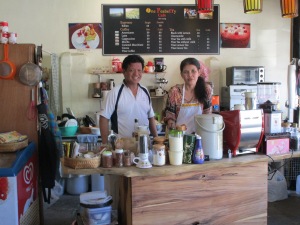 Ray and Koong owners of the small cafe One Peaberry.

Where does all this leave me, I wonder? If I come back again I will seriously have to re-think where and how I will do my buying. Perhaps I need to come earlier… in December… get my shopping done quickly, and make a quick exit to the northern city of Chiang Rai where the air is definitely cleaner. I wrote a post on this northern city in the mountains after my visit there two years ago. Check it out at What About Chiang Rai?. Back then I wasn’t too impressed with the markets, but I’ve heard they are improving. Northern Thailand is dotted with colourful Hilltribe villages and tea/coffee plantations…. and it’s cooler! It may not have the allure of Chiang Mai but my health is more important. I will consider taking the tranquillity of Chiang Rai and leave the excitement of Chiang Mai to the young backpackers. For now, I’ll just have to deal with the present day problems in Chiang Mai, enjoy finding new treasures in the abundance of its markets, and revel in soaking up all the best of what it has to offer.

For more information on coffee growing in the north you can go to the website of the One Peaberry Cafe at www.onepeaberry.com.