How can I best sum up my one month stay in Ubud?  On one hand, the month seems to have passed by much too quickly failing to give me enough time to really explore as much as I would have liked. On the other hand, it seems likes eons ago that I first stepped onto Bali soil again after a nine-year hiatus. It’s been a month of changes in many ways for me as in the weather,  friends who have come and gone, my personal travel plans, but the most difficult has been getting to know the new Ubud which hardly resembles anything like the small village it was. It has, unfortunately, morphed into a far too  busy and noisy town adjusting to the over development  brought about by the influx of tourists, many coming from China.

In spite of the rampant progress so evident almost everywhere, you will still be able to discover traces of the original Ubud. The three areas which form the basis of the Balinese culture are there and you don’t have to dig too deep to find them. I would catagorize them as:

After taking a few days to orient myself to the new Ubud, I decided to pay a visit to a place that made a lasting impression upon me on my first visit: the Agung Rai Museum of Art (ARMA). Agung Rai, a native Balinese gentleman, was born of a poor family but not without the soul of an artist. From an early age, he loved the arts and could be found selling his paintings on the beaches of Kuta to the tourists who flocked there. Since then he has made it his life long dream to share the culture and beauty of Bali to all those who come to visit. He has built his family compound from a humble home stay into an international UNESCO site which is far more than an art museum. It has become a centre for humanity exemplifying the peace and harmony resulting from living in the midst of nature and the arts. He and his family have worked tirelessly hosting workshops and performances which showcase Bali’s unique culture and art to young people around the world. Concerned that this could easily become an opportunity missed in today’s hectic world, he continues to promote his dream.

One of many sculptures in the gardens

Looking out to the rice field on the grounds of ARMA

When I visited for the first time nine years ago, I ran into him quite by accident and had the privilege of speaking to him without even knowing who he was. I asked if I could take a picture of him in his native dress to which he was more than happy to do. Unfortunately he was not on the compound the day I was there this time, but I could feel his spirit all around in the galleries and on the beautiful grounds of the family compound and the resort.

You have probably all seen the iconic pictures of the terraced rice paddies for which Bali is so famous. One of my favourite past times on this visit was to get up early enough in the morning before the day’s intense heat surfaced to take a walk out to a nearby rice paddy. In spite of the rampant growth, there are, thank goodness, rice paddies that can be easily reached either on foot or by bike. They aren’t terraced but they provide a lovely walk to see the flat fields being worked by the local farmers.

One of my early morning walks to the rice fields

It wasn’t until my final week that I finally was able to go with some friends to the community of Tegallalang, north of Ubud on a half day trip to see the rice terraces which are probably one of the most popular ‘must see’ activities for tourists. Although a bit gimmicky with the photo op places charging a certain fee to have your picture taken with those lush, green rice terraces in the background and the swings which are almost everywhere allowing for the thrill of a life time for the young at heart, it is still worth your time to go and experience it.

Looking back to where we started our trek

We took a private taxi out to Tegallalang rather than go with an expensive tour group. Fortunately, it was a bright sunny day but, unfortunately, some of the trails were still muddy and wet from the previous days’ rains. We started unbeknownst to us at the end of the trail which probably was the best thing we could have done because we avoided all those tour groups who were starting at the beginning. It was a hard slog at first as we had to pick our way up and down the trail very carefully so we wouldn’t fall. 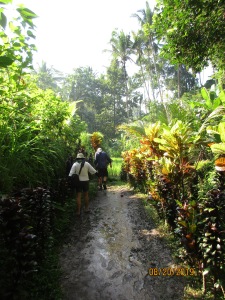 Once we had discovered that we had started at the end of the trail and that the best in scenery was yet to come, we felt better. We were on track and the end was near. Before we knew it, those iconic green terraces were there in front of us and we just couldn’t stop snapping pictures. This is what we had come to see and it didn’t disappoint!

At last there were the rice terraces

A well deserved rest at last

Tired and a tad muddy, we discovered we had enough time to stop at the Smiley Cafe where we had agreed to meet our driver for a cold drink before heading back to Ubud. We had timed it all beautifully because as we were leaving we noticed more and more bus loads of visitors arriving. By now it was almost noon and getting very hot. Yes, the best time to do this trek is as early as possible in the morning before the heat and the crowds appear.

On my previous visit to Ubud my husband and I stayed at a guest house near the Monkey Forest where one particular monkey decided he wasn’t going to accommodate anyone he thought was invading his territory. Actually we had no such intention and didn’t know that the more daring monkeys would look outside the park for their food. They were probably fed up with eating the bananas that tourists were feeding them so decided to look for more interesting tidbits. Well, this particular monkey struck it rich the day he found me eating a delicious cinnamon roll on the balcony where we had our daily breakfast. In Bali it’s customary to have your breakfast served to your room or balcony by very solicitous waiters who carry it out to you on trays. You have to give the Balinese tops marks when it comes to service with a smile.

To make the whole experience more agonizing, this monkey sat on the railing peeling back the layers of my delicious breakfast right there in front of me. To top this off he had invited his friends to come along to help him. At this point, we had to beat a hasty retreat to our room to finish our breakfast there. After further attempted thefts to get my water bottle or anything left on my balcony, I resolved never again to stay anywhere near the Monkey Forest.

This time around I made certain my place would be far enough away from the monkeys. I actually drummed up my courage to visit them in their natural habitat when friends, Irene and Trevor, invited me to accompany them.  I figured it was time for me to bury my hatchet with the monkeys.

The rules for how to handle the monkeys and show them the respect they deserve have been made clearer. The park, which is owned and run by the community of Padangtegal, is still there and remains another of Ubud’s main attractions. However, after some attacks and bites from the monkeys who make this park their home…the population is said to be over 700 long-tailed monkeys or Macacas and increasing… the authorities realised they had a problem on their hands.

Near the main entrance

There are signs and warnings everywhere about not feeding the monkeys because they now get three feedings a day of sweet potato and other vegetables and fruits from the park attendants. Tourists must not take food of any kind into the park or carry a plastic water bottle or bag. If you should have a backpack, then be aware you could be asking for trouble because monkeys have a special radar beaming to them that there might be something in that bag to their liking, and in a flash they can unzip a pocket to take a look.

Park personnel waiting to help out any tourist with the monkeys

Trevor was carrying a back pack with camera equipment and other needed items, but he forgot about the handy wipes he had put in there. One astute monkey decided to see for himself, found the wipes, and made off with the whole package. By remaining calm until the monkey was ready to give up his quest for looking for anything more, the monkey decided to move on. The number one rule for handling monkeys is to not panic! Remain calm and the monkey will continue on his way to bother someone else. 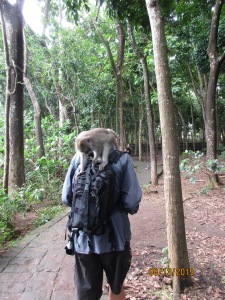 Trevor with monkey on his back 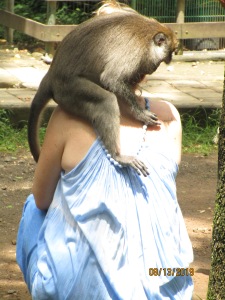 This monkey wanted a bead on her dress

I am happy to report that this works. I had no problem with the monkeys that day. As we entered the park, I decided to focus on observing how they interacted with one another. Watching the adults with their babies was truly fascinating. By not getting too close and adopting a Zen like state of mind, I was able to get some great pictures as well.

Mother or father with baby

The Macaca’s are noticeably territorial. There are five groups living in this park forest starting with a  group of elders who dominate the entrance to the Main Temple. 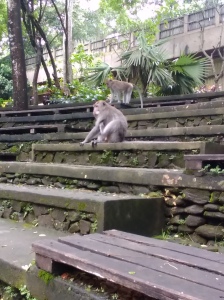 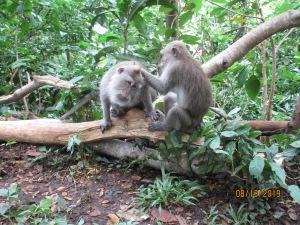 My visit to the Sacred Monkey Forest this time around was definitely a more positive experience. I overcame my anxiety about them by joining my friends and vowing to remain calm no matter what happened. Relax and go with the flow. Don’t show any fear you might have of them and respect their territory. We as human beings have much to learn from the monkeys.

There is so much more I could have discovered about the Balinese culture in Ubud.  What I did learn is how their culture is closely intertwined with the Hindu philosophy as reflected in each of the three sites I have just written about. Each of them are examples of their way of living. All three try to teach us that we must as human beings respect and appreciate our differences, that we must also do the same for nature, and finally look for guidance from our God(s). We must not think that as human beings we are more clever or have all the answers. The key is to balance all three of these components in order to achieve harmony in our lives. If we could come anywhere near to doing this, then maybe we will be able to save ourselves and help make this crazy world we are living in a better place.

6 thoughts on “Ubud – Art and Culture, Monkeys, and Rice Paddies”