What is the one thing we all hate to face throughout our life? In fact some of us hate it so much that we sacrifice our bodies, our minds, and our souls to keep it at bay? If you haven’t guessed by now then you are one of the many who are resisting it, and why you resist it is because you fear it. It’s just in our human nature to fear anything new.

My title gives away the theme for this post if you haven’t guessed by now. Check it out in the Oxford dictionary:

“To transform something is to change it”.

You must be kidding you think! However, isn’t it true? We hate change because it means being shoved out of our comfort zones. It might mean we have to change the way we’ve always done things: like our diet, have to move, have to pay higher prices for the things we’ve always taken for granted, have to learn how to deal with the changing weather patterns we have been experiencing of late, and a host of other things. The really challenging part is to accept the fact that in dealing with change of any form, we have to start with ourselves. We have to examine the old beliefs that have been ingrained in us since the day we were born. We have to rid ourselves of those that no longer serve us and decide which ones resonate with us that will enhance our lives and be more in concert with what we have left in our world.

The older we are,  the better able we are to see how our world is changing and changing fast. We know there are many things we need to change but still we resist and often delay until it’s too late. This is exactly what we as a part of the human race are doing now and have been for many years, especially with accepting the fact that we would have to deal with the severe effects of climate change if we didn’t start lessening our dependence on fossil fuels.

Can we put all the blame on our governments, corporations, or world leaders if we see ourselves doing the same things? We all see and complain about the things that are wrong in our world. However, do we see what needs to be changed in our own lives? If you happen to be one who sees what needs to be done, then ask yourself what is holding you back? Perhaps you hesitate to make changes because you feel that the things you are seeing are out of your control, such as wars, wildfires, floods, human rights atrocities, and the myriad  other things the media feeds us every day. If that’s the case, then the tendency is to throw up our hands in despair and let our leaders deal with it. But shouldn’t we be doing something to help rather than to leave it to others?

Forever the Pollyanna who wants to see the good in everything, I believe we as individuals can do something. First, we have to admit that there are many things we need to change in order to meet the needs of our future generations and, thus, save our planet. Then, we need to ask what we as individuals can do if we recognise the urgency of change and aren’t afraid to embrace it.

Where do I start, you may ask? Would it surprise you if I said “Start with yourself.” That’s my New Year’s resolution. Those of you who know me or who have been following by blog, know that I am keen on self growth. It’s an ongoing process and takes work. I have faltered many a time but always seem to come back to it when I feel it’s something important. This time around I am taking it more seriously thanks to climate change. There is so much at stake here so I have to carry through.

As many of my readers know I’ve been visiting Chiang Mai in Northern Thailand for over twelve years allowing it to morph into a second home for me.  When I look back over the years since this began, I realise that I never set out with this goal in mind. In fact, Thailand wasn’t even on my ‘bucket list’. Travel definitely was on there, but it was to visit such places as  Scotland, England, Greece, South America and Australia…not Thailand or any eastern country… except Japan.  After talking to people who had been returning to Thailand year after year for various reasons, my husband and I thought we should give it a go because we found out we could stay there for the whole winter and not only live in a warm climate but actually live much more cheaply than at home in Nova Scotia.

Our first trip was in 2008. I distinctly remember making a vow to return the next year as we headed out to the airport to catch our plane back to Canada regretting that we had only booked for three weeks.  I’ve been returning ever since for up to five months at a time. Not a person who is content to do all the typical things retired folk do, I literally fell into importing some of the many great things I saw at the markets while shopping for souvenirs to take back to family and friends. The opportunity arose not in Chiang Mai as you would expect but in Sengigi on Lombock, an Indonesian island near Bali. The idea to buy some things to take back home to sell hit me out of the blue when I walked into a big store which seemed to be doing a thriving business. I met two guys from San Francisco who filled me in on how reputable the owners were and how well they had done with their merchandise. Not one to overdo things but still taking the gamble that I would find a niche at our local Farmer’s Market, I bought about $70 worth of merchandise. To my surprise I sold it all in a matter of weeks in the Mason’t Hall. The rest is history. I have been there ever since selling clothing, jewellery and other accessories, mostly from Thailand but some from other SE Asian countries. I’ve had a good run at it whereby I’ve been able to pay my airfare and then some each year, and it  has kept me busy in the summers. I’ve used Thailand and SE Asia as a base to launch my travels to other parts of the east, such as Australia and Singapore. I’ve even managed to visit some of those other ‘bucket list’ countries, such as Greece,  Devon, England, Ecuador, Uruguay, and Argentina in South America, and Narita on a stopover in Japan for a day. Others, which weren’t on my list but were added as my insatiable thirst for travel increased, were Hong Kong, Dubai, Morocco, Portugal, southern Italy, and Paris.

I can feel the huge changes coming at us as our world heads towards disaster if we don’t start doing something now. An external force beyond my control is causing me to reconsider what my actions are doing for myself and the world. It’s become obvious to me that the changing climate is the primary reason for me to change my focus. I’ve asked myself how I can I be of better service to our ailing planet. I have difficulty finding the satisfaction I used to have for flying to Thailand to buy more things to sell back home, all the while adding more carbon to the atmosphere. I am well aware that this is the most important thing for us as humans to recognize and do something about. I have to start somewhere so this is a good place to do it. I think it’s time for a change… to use my skills in a different way. I haven’t quite figured out how that will be but the answer will come. Perhaps it will just sort of fall into place when the time is right as my little import business did. I know what I like to do and what I am good at so this shouldn’t be too difficult to recognise when an opportunity comes knocking at my door.

This revelation isn’t something that just happened. It’s taken me most of my life to listen to what my heart says rather than what my head tells me. I have some ideas which swirl around in my head but no answers yet. They will come, I know when the time is appropriate. I have made a vow to myself not to spend my time needlessly worrying about what the future holds for me. This is a huge learning for me and a great way to relieve stress. I heartily recommend it.

Below is a picture gallery of recent photos taken in Chiang Mai. Click on each one for the caption. 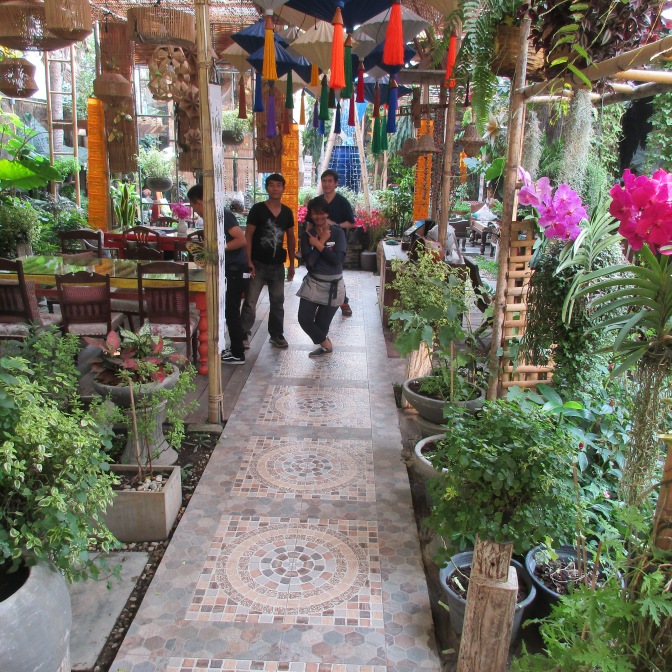 Stopping for a cold drink in the new lifestyle cafe Daifa 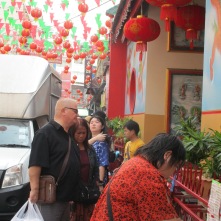 Lots of bargains in Chinatown 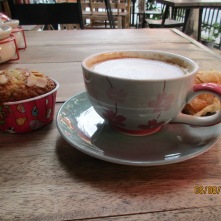 Coffee break at 2C’sSons where i am staying

Memorial to the late King Bhumibol 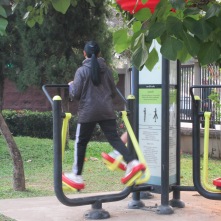 Puak Park a good place for a workout

10 thoughts on “Transforming My Life”