Upon arriving in Chiang Mai for my twelfth time, I have been noticing obvious and more subtle changes in the city that will have me seriously considering why I should continue to return and look at it as a possible second home.

The most obvious problem for me has been the air quality issue. I arrived on the fifth of January which is normally a good time to be here before the effect of the burning which occurs every year in the North wafts its way down to Thailand’s second largest and most popular city.  This year smoke haze was already here to greet me with a pollution index climbing up to  170 PM2.5. This is considered too high and unhealthy for sensitive groups or people with respiratory problems such as the elderly or very young children. If it goes up to over 200, then we are in the very unhealthy range for everyone. Purple is over 300 so you can imagine what that must mean!  Last year Chiang Mai managed to reach that level some days in late March and April when the effects of the burning and drought were at their worst. This year it’s all up for grabs. No one knows what it will be like this April. The odd thing about all of this is that not every day is so bad. Recently, the index registered a healthy 71 because of the the way the wind was blowing. We could see the mountains all around us, and I felt my energy returning. The next day it was back up to 170! The government says it’s going to clamp down heavily on the farmers who insist on burning so as to get in two crops for the  season, but the big question is whether or not they will enforce that law? It’s always easier to say rather than do with  promises the Thai have all heard before.

Just in case you aren’t familiar with what PM2.5 actually is, I will explain. It basically refers to the atmospheric particulate matter (PM) that have a diameter of less than 2.5 micrometers which is about 3% of the diameter of a human hair. It is the fine dust giving the air a definite hazy effect. If we can’t see the mountains that surround Chiang Mai, we know we have a high rate of particulate matter in the air.  We need to be aware of how high the index is so we can be ready to wear a good, tight fitting mask to prevent this fine dust from getting into our lungs which can cause permanent damage … if one is subjected to it day in and day out for long periods of time. After suffering through flu like symptoms and sinusitis these past couple of weeks, I have stocked up on masks which I now wear every time I step outside, no matter what the index says.

My decision to not return to Chiang Mai isn’t yet carved in stone. If for whatever reason I do decide to return, it will be in November before the dry season begins when the index is traditionally low. If I dare to return I will only stay for a month. My health has to take priority over everything else.

Of course this issue of air quality in Thailand isn’t new. It’s been steadily growing worse over the years. Furthermore, it’s not just an issue for Thailand but for all of the SE Asian countries.

Like many countries around the world,  SE Asia is being forced to face monumental changes as our climate conditions worsen. The question is just how well prepared will they be to face them? Some will do better than others. I am doubtful that Thailand will ever be prepared to meet the challenges facing them. It has always been the  most developed and the wealthiest country in SE Asia, which could be a positive thing. Unfortunately, their present government is the weak link.  As far as I can see,  it hasn’t a clue on how to handle the air quality problem or any other future problems the changing climate will present to them. The Prime Minister and his so-called elected government appear to be almost powerless to show any kind of leadership in this area. Thailand has a military backed government which is in turned backed by a king with military training, so how would they have any knowledge or interest in the science of this subject? They are more interested in staying in power and dictating to the people how they should change their habits rather than set an example themselves on how they might.

Unfortunately Bangkok, the capital of the country, presently has the distinction of being the 5th worst city in the world for pollution.  The Prime Minister’s response to the recent protests by university students in both Bangkok and Chiang Mai, was that the people need to stop using their cars and cease burning incense.  He failed to say what his government was prepared to do other than prohibit trucks from entering the centre of the city. I wonder how he expects Bangkokians  to deal with that? Their public transportation system is fragmented and overloaded. It’s a world class city of more than eight million people drawing hoards of tourists each year. All these people have to move around and be fed. He has offered little if any practical solutions.

The business section of the Bangkok Post recently published an article lauding the country for its recent strong economic growth, meaning a stronger baht and interest from China to consider the central part of the country where Bangkok is located perfect for future auto and technology companies to do business. What the article further pointed out is that there has been no effort by the government to enforce any kind of pollution controls on these companies, so it’s not surprising  the whole area is experiencing the worst pollution it has ever seen.

Thailand is not the only country to be blind to the disasters facing us posed by our dependence on fossil fuels and continued growth at all costs. Does this not sound vaguely familiar to what is going on even in Canada with our latest conundrum….the Frontier Tech Project proposed for Alberta*? This disconnect is clearly on display not just here but throughout our sorry world.

Another recent article in the Bangkok Post states clearly that the country is at great risk as it battles with “diminishing natural resources, a deteriorating environment, too much industry, burning of their forests, depleted soil, threatened biodiversity, drought and water mismanagement”.

For years scientists have been trying to alert the country to the devastating effects of flooding in the south. The late King Bhumibol was a strong advocate of improving the potential problems which threatened to flood the capital. Studies have been on going but with little forward movement from the “Water Chiefs” to control the flooding in the Chao Phraya River Basin. Lots of studies but little action because the Thai, like most of humanity, hate to change anything. I suspect much of that is due to the age old problem of corruption in Thailand and Asia which the PM vowed he would eradicate once he was in power. Of course, he’s done nothing!

Since Thailand opened up its doors to the western world, it has gained the well-deserved reputation as “the land of smiles” encouraging tourists from around the world to come and see for themselves. The smiling faces of the Thai people, their grace, and steady tolerance for all those who have visited their beautiful country have certainly been a lure for me over the years. However, this year I am conscious of a subtle change. The smiles aren’t so prevalent and the service personnel look more stressed. There are too many young men dangerously speeding around Chiang Mai’s streets at two o’clock in the morning endangering lives, and there are more homeless people lying about on the streets. Judging by what I’ve read in the papers, the murder rate is rising as well. This is no surprise when life becomes more of a struggle for too many people.

Thailand has a high literacy rate in the cities, but the far north where most of the Hill Tribes live has always been poor. The present government has done nothing to improve their lot forcing the farmers to grow an additional crop of sugar cane and corn just to survive. In doing this, the rest of the country has had to deal with the resulting pollution. It’s a vicious cycle of events which the present government has so far done nothing about. There are solutions to this problem, such as helping the farmers obtain more modern machinery and to grow crops for sustainability rather than for feeding the voracious appetite of the Chinese population. The late king worked tirelessly in advancing the idea of sustainable farming. Unfortunately his son, the present king who spends most of his time  outside of his country, isn’t interested in such things. Sadly the poor of the north are being practically forgotten. For survival they are putting in that second crop just to feed their own families. Can you blame them?

I honestly think the majority of the Thai are feeling somewhat abandoned by their leaders, especially the younger well educated group. Their recent protests in Chiang Mai and Bangkok were held to bring their concern about the air pollution to the government’s attention. There need to be many more before any change will take place, I fear.

It’s a well known fact in this country that the disparity between rich and poor has been growing at a faster rate than in the other SE Asian countries. We all know that this will only result in more problems for the country unless some action is taken to even things out. As in most countries today, the burden of making meaningful changes to how things are done and the appropriate actions to save what resources they have left will take much more effort and a definite change in their government.

Will Thailand be able to change or give up some of their out -dated traditions that no longer serve them in their quest to carve out a life which will somehow meet the needs of its people for the future?

* A project proposed by Frontier Oil Sands to open pit the mining of bitumen for another 40 years providing 7,000 jobs and a source of oil for Canada and the world. They promise to mine this sustainably to provide money for much needed improvement in education and health care for Albertans. 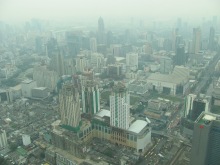 The late King Bhumibol at the sacred shrine of Erewen in Bangkok.

Chedi Luang- one of the oldest wats in Chiang Mai. 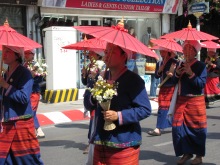 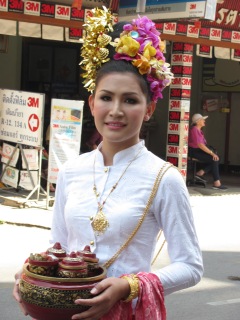 4 thoughts on “Thailand and Climate Change in 2020”