After recently slogging through a day where there was little news other than the latest statistics indicating that our number of coronavirus cases was still increasing, that we would have to keep washing our hands and carry on with our social distancing at least until the end of June, I couldn’t help feeling that life basically sucked. Fortunately, the next day  I was snapped out of my sombre state with these words written by the Indian author and political activist, Arundhati Roy. I get many emails these days relating to COVID-19. Most of them get deleted because after awhile they become repetitive.  However, this one from Greenpeace  with Roy’s insight on what we could expect in the future, caught my attention. It hit upon something that was bothering me: Have we already forgotten about the climate crisis that faced us  before COVID-19 reared its ugly head? We may be hearing that air pollution has decreased in some parts of the world and certain birds and animals we haven’t seen around for awhile are appearing in the almost deserted streets of New York and Paris, but does this mean our climate is now okay and we won’t have to worry about that any more? I doubt it! However, Roy’s words in the following quotation show us that there is an opportunity being offered to our world by the pandemic which I would like to share with you:

“Historically, pandemics have forced humans to break with the past and imagine their world anew. This one is no different. It’s a portal, a gateway between one world and the next. We can choose to walk through it, dragging the carcusses of our prejudice and hatred, our avarice, our data banks and dead ideas, our dead rivers and smoky skies behind us. Or we can walk through lightly, with little luggage, ready to imagine another world. And be ready to fight for it.”

What she has written is true for each of us as individuals and for humanity as a whole. Before COVID-19 arrived to give us a much needed kick in the butt to move forward, many of us knew we were headed down the road of destruction when it came to caring about our environment. Scientists, philosophical writers, and futurists have all tried to alert us to the disasters ahead for years, and yet we failed to respond except for a dedicated few. Now we are getting another chance to take action from a virus that has killed over 180,000 people and put most of the world into lock down status. Who would have believed this one month ago? This catastrophe has revealed to us how quickly everything can change in the blink of an eye.

Like most Canadians these days, we are proud of our political leaders who have taken the situation in hand and managed to rally us into accepting the restrictive rules that have been imposed upon us to stop this virus. All generations since time began on this earth have had to deal with wars of some kind, so we have an idea of what it’s like from what has been recorded in the history of mankind. After two world wars this past century, many of us have heard first hand of the hardships and sacrifices made by our parents and grandparents. Now COVID-19 is giving us the opportunity to learn about another kind of war because that’s what we are facing….a war which lurks around every corner and is ready to strike anyone regardless of age, colour or nationality. As our politicians and health care leaders keep reminding us, “We are all in this together”. Isn’t it interesting how adversities such as a war can bring us together?

Like all wars, this one is presenting us with death in extraordinary numbers, sacrifices beyond the pale from our front line workers, and restrictions to all who of us who aren’t directly involved. The fact that some are having to personally face the death of a loved one, as well as having to stay inside their homes and backyards (if they are lucky enough to have one), and only go out in public to fetch necessities, is causing stress for many depending on their personal situations.

Our media is also keeping us well informed of how the virus is affecting the most vulnerable in our communities: the elderly in long term care homes, seniors living alone who don’t have family near them, the handicapped, criminals, and the homeless.

However, I think that for many people it’s the not knowing when this virus will have run its course, when they can get back to work, or if there will even be work for them to go back to, that is starting to take its toll? Uncertainty about the future is a huge stressor for most people.

Our economy has taken a nosedive  with a soaring number of unemployed sitting at home just waiting to see how it will all unfold once the virus has run its course. Fortunately, we have a caring government and a fairly wealthy country. The federal government is in a position to make funds available for those who need money to feed their families and for companies who will need money to get back into business again. Our Prime Minister and his cabinet managed to implement their plan allowing funds to be distributed to those who needed it as quickly as possible with few blips as far as I can see. Banks are also coming to our aid by giving their customers more lenient loan payments. Yet another encouraging result of this war effort is to see how the federal government and provincial premiers are pulling together to face the difficulties in fighting this virus. I sincerely hope they will continue this trend after the war is over.

Just a week ago, I was beginning to despair that our leaders would ever steer their focus away from the virus and turn their thoughts to dealing with the restructuring that would be required. Would they finally recognize the opportunity they have been given by this virus to address the crisis we are facing with our changing climate? To my surprise and delight several things have recently come to light leading me to think that they are beginning to take climate change more seriously:

There appears to have been more going on behind the scenes in this country than what the general public has been been made aware of.  We need to hear more of these good news stories for our peace of mind and to let us know there is light at the end of the tunnel. This is crucial for those who will have to bear the brunt of what is to come….our younger generation. Right now we need receive some hope that we can make the changes needed to deal with our changing climate, and that our government is there to support us in that. We all need to help create an economy and way of life that will take us forward to a better world rather than backward to the same old one. These latest announcements from both levels of  government were much needed for Canadians to understand that there is hope beyond the latest COVID-19 statistic.

** Arundhadi Roy, not to be confused with Anuradha Roy, is a best selling author and political and environmental activist born and living in India. In 1997 she won the Man Booker Award for her novel “The God of Small Things.”

** To find out more about Quebec’s plan for sustainability you can Google an article written by Nicholas Van Prael in the April 6th edition of the Globe and Mail entitled “Quebec Hatches Plans to Bolster Economy as Legault eyes post-pandemic world.”

These pictures are of two sustainable farms in Port Royal and scenes of the Historic Gardens  in the town of Annapolis Royal after a recent rain/wind storm causing an unusually high Bay of Fundy tide that flooded the lower part of the gardens. Those who have lived here all their lives said they have never seen this happen before. 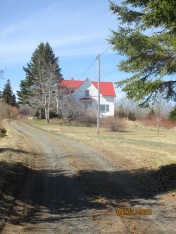 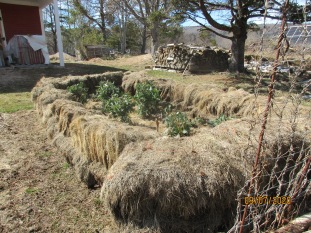 A bed for wintering vegetables. 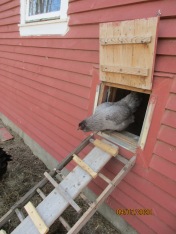 Chickens for eggs and Thanksgiving. 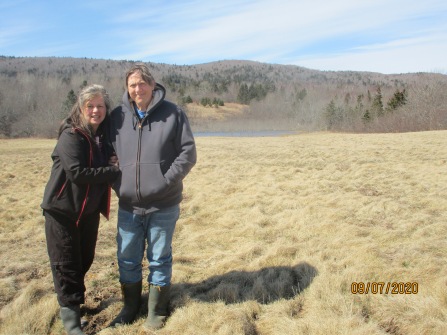 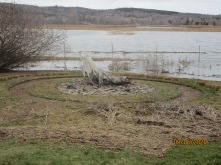 Flooding at the Historic Gardens from rising Fundy tide. 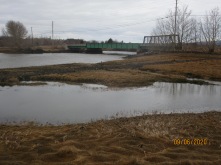 The dykes couldn’t keep out the sea water. 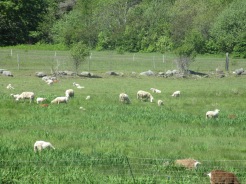 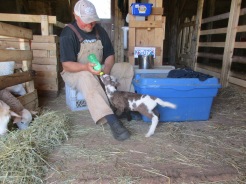 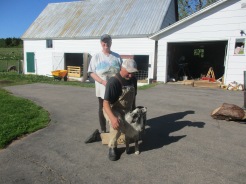 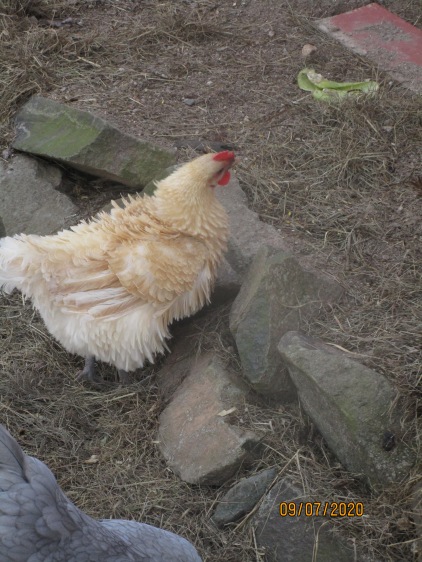 Peaches, a breed of chicken which lays light blue eggs.