Climate change is finally working its way up to the top of our list of concerns these days. How can we ignore it when our newspapers and other social media are bringing it to our attention every day? In fact, it’s no longer about climate change but about a climate crisis.

Young people around the world are worried  that there may not be a future for them and if there is , it won’t be anything like what we have now. Fear for their future is luring them to protest and camp out in the streets of large cities around the world in order to gain the attention of their governments to do something about it. If you dare to listen or read about what’s in store for us, it can be scary even for us older folk who will most probably escape it. We can’t help feeling frightened for our children and grandchildren who will have to deal with the brunt of it.

The impending climate crisis and how to deal with it is dominating our daily conversations in Canada as we head to the polls in less than two weeks to elect a new government. Many of us are hoping that whoever gets in will make climate change their number one priority. We want our newly elected government to be an example to the rest of the world by taking seriously the need for Canada to get off fossil fuels and replace them with renewable sources of energy. Doing this would help to stem the increase in temperatures around the world and lessen the dire effects that scientists are predicting. We want our government leaders to take a strong stand for dealing with the climate crisis.

Our track record for dismissing the findings and recommendations of scientists is dismal. We have ignored their dire warnings about the mishandling of our resources for more than 50 years which is far more than we should have to admit. As far back as the early ’70’s, I remember having my consciousness raised to this possibility after reading the book Limits to Growth. Commissioned by the Club of Rome, funded by the Volkswagon Foundation, and supported by four distinguished writers and over 15 researchers, their findings stated that if we continued as the rate we were going back then, we would deplete our resources causing the eventual collapse of our society. However, we could avoid this by creating a sustainable society instead of a wasteful one. Sadly the critics, including many of the scientists at that time, panned the whole idea and went so far as to call it a conspiracy driven by the rich.  However, the message stuck with me and spurred me on to start a vegetable garden and be more conscious of what I ate. Does anyone remember when the Diet for a Small Planet hit the bookshelves? For awhile this was my food bible.

The trend to changing our life styles by using our resources wisely all made perfect sense to me. Unfortunately, for the majority of the readers at that time, the idea that we could run out of oil, that our oceans would die, and all living things could be affected to such an extent by the polluted atmosphere and soil that they could become extinct was simply too ludicrous to even think about, let alone accept.

So, here we are today seeing many of those predictions of the ’60’s and ’70’s coming to fruition. We are experiencing more severe storms, our atmosphere is warming up, our ice covers are melting, and our oceans are rising. Scientists are telling us this is happening at a faster rate than previously thought. The IPCC (International Plan for Climate Change) is now telling us we have just 12 years to start reversing this tide. If we can’t hold global warming to 1.5%, we will be doomed.

Unfortunately, we’ve suddenly become deaf to such bad news. Many, including most of our world’s governments, are refusing to grasp the severity of our predicament… that is until last year when 16 year old Greta Thunberg appeared on the scene to take on the daunting task of waking them up.

Now our challenge is to figure out just how we, meaning people of all ages from around the world, can come together to deal with the crisis we have created. Where do we start and what can we do? The answers are almost impossible to think about for some. It’s easy to see the problems but not so easy to come up with solutions. The changes needed aren’t going to happen quickly. In that case, should we give up before we even make an attempt? No way say a growing movement of people, such as the Extinction Rebellion. To learn more about this movement, you can click on this link: Tackling Climate Change in Nova Scotia 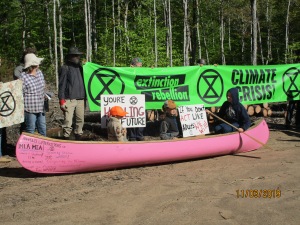 XR has drawn in the young and the old.

If you want to seriously do something to help our planet with this man-made crisis, then start small. I learned during my years as a student of psychology and later on as a teacher and counsellor for older workers who lost their jobs during the ’90’s recession in Ontario, that in order to be successful in overcoming a loss and to move forward, you must start by taking one step at a time. Take that first step to look within and make an effort to think in the positive rather than the negative. Instead of dwelling on the problems coming down the pike in the future, focus on the present and ask, “What can I do right now”?  Take action and do whatever you are capable of doing even if it’s something as small as refusing to buy bottled water. Talk to like-minded people and  share your ideas. Young people can talk to their elders as Greta is doing. Don’t be afraid to speak up on the topic. Positive thoughts lead to positive words, which in turn lead to positive actions. Start small because too much time looking at the big picture can be overwhelming causing us to do nothing.

My “ah hah” moment on how I might deal with climate change, beyond recycling, reading, writing, and getting depressed over it, hit me in April in Chiang Mai, Thailand while waiting for my return flight home to Canada. If you want to read more on this go to this link: Waking Up to the Effects of Climate Change

After two gruelling weeks of life in Chiang Mai’s extremely polluted air, I was happy to hop on that long, overseas flight and put my feet down once again on Nova Scotia’s familiar ground and breathe in her clean air. However, I wasn’t back for more than a few weeks when I was confronted with another shocking environmental disaster…rampant clear cutting!

I first witnessed the devastating effects of clear cutting about twelve years ago shortly after moving to Nova Scotia. Having to put up with the constant use of our narrow road as a right of passage for the huge trucks taking logs to nearby mills and then actually seeing the devastation on the mountain behind my house made me physically ill. After the logging stopped, unfortunately the after effects did not. A heavy rainfall would create instant waterfalls which at one point wiped out part of our road and the drainage tunnel which took the water to the Bay of Fundy. If the whole road had gone, we would have been completely stranded from the mainland. Eventually the loggers moved further down the mountain leaving behind what was once a lovely parcel of forested land looking like a war zone. Sadly, our province has done nothing to stem the tide of clear cutting and like a cancer that hasn’t been dealt with, it continues to grow.

These two horrible experiences within several months was more than enough to wake me up to the seriousness of the problem we are being faced with these days. I could no longer close my eyes to the mismanagement of our Earth’s resources which I had just encountered. I wanted to do something about it which would be meaningful and constructive.

The opportunity came knocking at my door when I discovered that there was a fledgling chapter of the Extinction Rebellion movement right here in Annapolis County. Meeting like minded people, learning more about the causes and repercussions of climate change, and working towards something that will hopefully help our government on all levels to acknowledge that we have a crisis on our hands is giving me a sense of purpose. It has stretched me in ways I have never thought possible. I am speaking out and people are listening. I have picketed a wood lot on the North Mountain which is being devastated with clear cutting. On September 27th, I marched down the streets of Halifax with 10,000 other concerned Nova Scotians in support of World Youth Day.

Demonstrating the clear cutting on the North Mountain 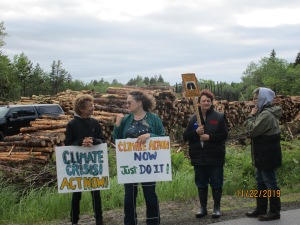 Standing with our posters at the sight.

The start of our walk in Halifax for Youth Day. 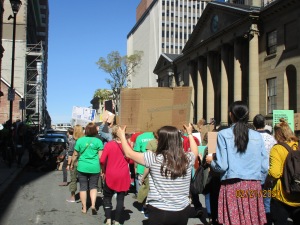 Getting the message across with creative methods.

Speeches in front of City Hall.

After being hit with a ferocious level 3 hurricane at the end of August our county of Annapolis finally declared a state of Climate Emergency. Although Dorian didn’t play too much havoc with the water level of our basin which our town lies upon, he did manage to take down far too many trees and power lines which left some homes without power for almost a week. It was a wake up call for the council and the people who live here. Hopefully it will lead to the council’s immediate action in preparing for a future which is threatened by our rising sea levels. 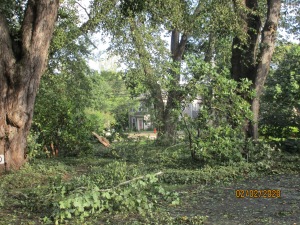 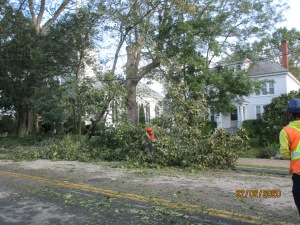 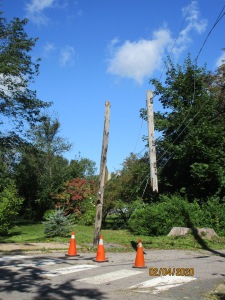 A volunteer cleaning up the mess in the Historic Gardens.

This is just the beginning as there will surely be more disasters to come. The will for people to take action to meet the challenges that are coming must be there. It’s up to those of us who care enough to put pressure on our government to do the right thing by telling us the truth and stop procrastinating. Our children’s futures are at stake. As part of the older generation, we can be a great help simply by being an example to our young  people. We can make changes to ourselves and our lifestyles. We have the time to give and if we use it wisely, then we can at least give them hope.

3 thoughts on “Dealing With Climate Change on a Personal Level”