It’s not easy for us to make the changes we know we should make in our lives no matter how much we would like to. As human beings this has been our greatest challenge and still is today as we face what appears to be a never ending litany of problems around the world. Most of us agree that our number one challenge is how to deal with our changing climate and yet we seem to be unwilling to make the necessary changes  to deal with it.

Last year I wrote a post entitled   Waking Up to the Effects of Climate Change  resulting from my visit to Chiang Mai in April when the city’s pollution index soared high enough to beat out New Delhi in India. Granted it can be exciting to gain world recognition for being the best at something, but in this case to break the record for being the most polluted place in the world has done this city no favours. It’s now February 2020, and I have seen no improvement. In fact, the pollution has gotten worse.

Many expats who lived and worked here for years are leaving  for other countries, and the tourist numbers this year are down. This was a fact even before the coronavirus came on the scene in January. Their insatiable need to capitalise on anything that will bring in money led the Thai government to allow Chinese developers to build far too many boutique hotels, classy restaurants, and other tourist attractions all geared to accommodate the Chinese tourists who had money and didn’t mind spending it. Back backers don’t bring in enough dollars. A few astute Thai warned that it would be a passing phase before the Chinese would look for other areas to swarm to. They were right about this, but no one foretold the outbreak of the coronavirus.

Wouldn’t you think that the already dwindling numbers of tourists and ex-pats concerned for their health because of the city’s  dirty air would have elicited enough concern to get the leaders running this country to wake up to the problem and make an effort to come up with some solutions?

Unfortunately, there are few visible signs of this happening, and as is so typical of humanity, the Thai are waiting for their leaders to take the initiative to do  something… and that is their problem right there! Sadly, their government seems to be ignoring the crisis for a myriad of reasons:  mistakenly thinking that the problem will solve itself if the Northern Hill Tribe people would obey their laws and just stop the burning, a custom which has been carried out for generations. The government fails to see that issuing laws which aren’t being properly enforced, and then ignoring the source of the farmers’ plight, is not the solution for this serious problem. After many years of this kind of thinking, the farmers simply ignore the laws and to survive have resorted to planting extra crops of corn or sugar cane, not only to feed China’s growing appetite, but also their own families. A farmer’s  annual salary for his family amounts to about 10,000 baht a year ( roughly $450 Cdn). They can’t live on that so are forced to burn the waste from the first crop to grow a second one. In addition, they are burning their forests to uncover the special black  mushrooms which have become a Chinese delicacy. One mushroom harvest yields a farmer as much as a half year’s salary. Then to add  more fuel to the fire, I found out that wild fires are breaking out in the north because Thailand is now officially entering ten years of drought.

In the past, there have been some sporadic attempts to get the ‘powers that be’ to sit up and take notice of the pollution problem Chiang Mai is facing. In late 2018 a group of brave, young students dared to address the worsening air quality  when they adorned the faces of the three ancient kings with pollution masks at The Three Kings Monument,  a famous tourist site in the centre of the old town. The then governor was horrified and had them jailed for their misdemeanors. However, many citizens applauded them for taking the initiative to get their message out that the polluted air was a serious danger to their health.

Not to despair, I have found some good news on the horizon. The latest edition of City Life, an English magazine with a primarily Thai staff, are gearing up to tackle the pollution problem in 2020 by supporting and writing about the necessity to take action. There were at least three informative articles on what is happening and about to happen in the city. It’s finally looking like things will move forward.

After decades of wrangling between the government and concerned citizens, a dedicated group of 10 people from the private sector recently set up the Breathe Council with a measly 30,000 baht start up fee. Despite a lack of funds, they are making some headway. Here’s what they have accomplished so far:

Over the past 20 years, Thailand has been losing much of their forests to illegal logging and burning, causing  flooding in both Chiang Mai and in Bangkok. Deforestation has also caused massive pollution for Chiang Mai’s main water source, the Mae Kha Canal, which runs north, south and acts as a buffer between the Ping River and the moat that runs around the inner city. Nearly bald mountains are a recipe for disaster especially to a free- flowing water system dating back to 1296.  In addition, super highways and rampant development have played havoc with their original watersheds and canals turning the Mae Kha into a stinking sewer. To make matters worse, poor people began to settle along the fringes of the canal  which only added to the pollution, in spite of the city’s efforts to give them filtration devices. They also tried to relocate them but couldn’t find affordable housing. Over the years, every mayor has vowed to fix the problem only to fail miserably.

The canal became such an embarrassment that it was actually left off the tourist maps. After all Chiang Mai has been cited to become a future UNESCO World Heritage site so at least some realised that this wouldn’t happen if nothing was done.  Now concerned citizens are taking matters into their own hands. Community committees are forming and a working group to co-ordinate them has been formed. Money has also been raised to build reservoirs that will flush out the canal and its subsidiaries. The Ministry of Natural Resources and Environment is organizing activities to raise the public’s consciousness hoping to change old habits such as throwing their refuse into the waterways. All those involved are feeling confident they will be able to obtain a clean water system which will enhance rather than degrade the city. Parts of the canal have been cleaned up and greened. A good example is the Lanna Hospital which has created a garden for its patients. There are even plans for future parks to attract tourists.  Mae Kha is now back on the tourist maps! To add to this good news, I have noticed that parts of the moat are being reconstructed and looking much cleaner. Good things are happening here with water, now it’s time to tackle the air.

Today as I write this the PM2.5 pollution index is at an unhealthy 152 and the temperature is 36 degrees. Both are rising slowly but surely every day. Locals will agree that both are higher than usual for this time of year which is the dry or hot season. Some haze has been the norm at this time of the year since I’ve been coming here, but never has it appeared so high as it is this February. Usually mid March and April are the worst months so you can imagine what Chiang Mai will be in for this year? Some concerned people are planning to show up this Friday at the Three Kings Monument with placards and face masks. I will be going to support them and will report what happened in my next blog. Let us hope they will have a good turn out and no one gets thrown into jail.

*Biochar – is an ancient technology using natural feedstock, such as bamboo, corn or anything biodegradable, made by burning in kilns or pits. Doing this forms blocks of charcoal which can be used as fertilizer to put nutrients back into the soil.

Biomass – is plant or animal material used for energy. It can come from crops grown for energy, wood waste, food crop waste, or animal waste.

Pyrolysis – is used to treat organic material. It is thermal decomposition of biomass at very high temperatures. 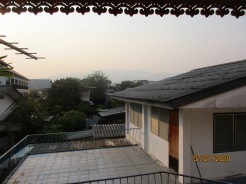 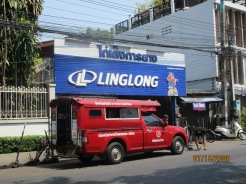 One of too many songtaews spewing out exhaust.

Me with my pollution gear at least for my face.

Part of the moat near where I am staying.